Reality 36 by Guy Haley is a really cool mash-up of a sort that doesn’t happen often enough. It’s a science fiction mystery. And not just any kind of mystery, but an old school detective kind of mystery, except that neither of the detectives are from any type of school that Sam Spade would have recognized.

The detective firm in Reality 36 has the name “Richards & Klein” on its doors, which exist in both real and virtual space. The year is 2129, and the world has definitely moved on from 2011. That’s both good and bad.  Otherwise, there wouldn’t be a story.

The Mr. Klein, of Richards & Klein, is Otto Klein. He’s ex-military. It’s not even uncommon today for ex-military personnel to go into security work in some way, or at least not uncommon according to TV and the movies. But Otto Klein is an ex-military cyborg. That’s definitely more 2129 than 2011.

And Richards, well, Richards is an AI. Yes, that’s Artificial Intelligence. But in 2129, AIs beyond a certain level are citizens, as are other creatures that don’t currently exist. Richards is a Class 5 AI, one of the most powerfully intelligent AIs remaining that didn’t go insane. There are AIs running lots of things in 2129. There are 3 AI Uncle Sams running the fractured government of North America. They substitute bureaucracy for power. I’m still snickering over that one.

How do Richards & Klein get involved? A simple murder that turns out to be not so simple. A man is killed. A human, not an AI. But a very important man to the AIs. The man who argued, lobbied and fought for AIs to be granted citizenship. Professor Zhang Qifang is found dead on a yacht. And in a London alleyway. And in his apartment in Los Angeles. And captured alive but with a faulty memory. When all the living and dead clones turn up (plus the one dead “real” Professor), it turns out that the situation is even messier than they thought.

And that whoever the villain is, he, she or it is targeting Richards & Klein specifically. And anyone who can help, will help them, or might be reasonably predicted to help them is in danger. And only an AI could make those kind of predictions. But which one has gone rogue? Who watches the watchers? 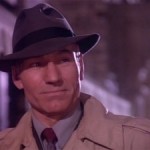 Verdict: Reality 36 is a kind of cybergeek technothriller with its roots back in noir fiction. If any of those types of stories appeal to you (they do to me) you will enjoy this book. Richards loves to adopt the personas of Sam Spade/Raymond Chandler-era detectives whenever possible (I’m certain he would have empathized with Captain Picard’s holodramas of Dixon Hill). Klein is the world-weary side of the equation, older, wanting to retire, but not ready to hang up his guns just yet, still making up for the bad things he witnessed.

Richards is also an anti-hero. He seems to be the only Level 5 who still has a sense of “play” for want of a better world. He definitely does do work, but only on his own terms, which makes him the only one with the power and the ability to stop the rogue. So he and his partner are the targets from the beginning. Watching them run through the “maze” is a fantastic introduction to the new universe that Haley has created.

But for a very new-fangled story (the AIs are even called neukind), this book has an extremely old-fashioned ending. It’s a total cliffhanger! Richards leaps into the virtual eye of the storm and the story continues in the next book, Omega Point. Dammit. I want to know what happens next.

Escape Rating B+: I couldn’t quite manage to stay up to finish it–but I finished over breakfast the next morning!