What if you found out your mother used to be a superhero? That’s the premise behind Raymond Benson’s The Black Stiletto, and it makes for one amazing story.

When I say superhero, don’t think of the family from Pixar’s The Incredibles. It wasn’t that kind of book, and this isn’t that kind of family. Benson’s Black Stiletto is way more like a female version of the original Bob Kane Batman.

What do I mean by that? Unlike Superman, the X-Men or the Fantastic Four, Batman is an unmutated, grown on Earth, human being. Highly trained and highly skilled, and possibly obsessive-compulsive to the max, but completely human. In the original Bob Kane comics of the late 1930’s, Batman began by avenging the deaths of his parents.

The Black Stiletto also has revenge on her mind.

But the story begins with a middle-aged man named Martin Talbot reading his mother’s diaries from the late 1950’s. His mother Judy is in a nursing home in suburban Chicago with Alzheimer’s; she doesn’t recognize him, or anyone else, anymore. So her lawyer gives him a floorplan of her house which shows a secret room in the basement, and a key.

Behind that hidden door, Martin discovers a treasure-trove and a puzzle. His mother’s diaries are there, from 1958 onwards. All of the original comic books featuring the Black Stiletto, which are worth a fortune on the collectible market. Two Black Stiletto costumes. But the diaries are astounding. The diaries of his mother’s life in New York City as a young woman, when she lived over a gym and learned to fight.

Martin remembers his mother always kept in shape. There’s still a punching bag hanging in that basement. He remembers her practicing in every place they lived. He knows she lived in New York, but not with him. He was born in Los Angeles. But he never knew his father, the mysterious Richard Talbot. And reading the diaries, he realizes that he never knew his mother. But for the diaries, because of Alzheimer’s he never would.

But was she really the Black Stiletto? And was the Stiletto a hero, or a just a vigilante? Read along with Martin to find out.

Escape Rating B: What an astonishing book! Superheroes are always larger than life. To suddenly discover that one of your parents was one, how much would that rock your world? When Martin discovers that his mother was nothing like he thought she was, it makes him question the whole of his life.

The diary that Martin is reading only covers the very earliest period of Judy’s time as the Black Stiletto. Those early years do come back to haunt the present, but it’s those early years that I really want to know about. Martin has lots more diaries to read, and I’m dying to know what’s in them. Read The Black Stiletto and you will be too. 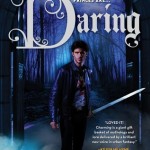 One thought on “The Black Stiletto”