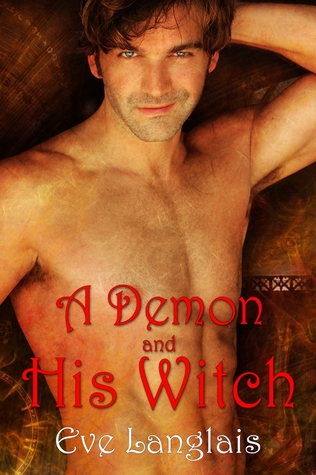 There are absolutely no great literary themes or deeper meanings to be found in A Demon and His Witch by Eve Langlais. And frankly, if all the demons look like the one on the cover of the book, who the hell cares? Seriously, that man has got something, and if Hell can just bottle it, they’ll have a fortune in souls. Yum. Make that YUM!

When I said there were no deeper themes, I lied. Just a little. (What can you expect in a story where Lucifer, Prince of Lies, is the big boss?)

Ysabel is Lucifer’s assistant. When I say assistant, I mean his administrative assistant. Because Hell mostly works like the worst bureaucracy you’ve ever seen. (What did you expect?) Lucifer really, really needs an Admin to deal with the paperwork!

Why is Ysabel in Hell? Because she’s a witch. A spellcasting witch. One who was burned at the stake in ye olde Dark Ages. These things happened. But the folks who burned her at the stake, well, let’s say they really honked Ysabel off. Her lover’s mother didn’t want to let go of her not-so-little boy, so she led the torch-wielding brigade. The boyfriend didn’t just let it happen, he stood around and watched. With her last breath, Ysabel sold her soul to damn the whole lot of them to Hell.

She didn’t read the fine print in the contract. No one ever does. Five of the a**hats escaped, and Ysabel’s true torments began. It turns out that working in Lucifer’s office isn’t all that bad compared to re-experiencing your own personal burning-at-the-stake every single day.

Of course, if she recaptures her tribe of escaped miscreants, her little fire-show will go away again. But Ysabel is a witch, not a tracker. Lucifer has just the tracker in mind. Of course he does.

Ysabel doesn’t trust men. Not after her first and only lover let his mother burn her at the stake. Would you? So who does Lucifer send her? Hell’s best-known stealer-of-hearts and female panties, the name and number on every female restroom wall in Hell, “For a good f*** call Remy”.

Remy is one of Lucifer’s best trackers. A half-human, half-demon warrior with a string of commendations and a sweet but totally insane demon mother.

And a man who spouts some of the worst and funniest pick-up lines in history. But they work. Even on Ysabel. And isn’t she one surprised witch.

Especially when he brings her home to meet his mother.

Escape Rating A-: This is sweeter than you might expect from the story premise. Which doesn’t mean that it isn’t every bit as snarky, funny and sexy as you do expect from the blurb, because it absolutely is all of those things. But the love story between Ysabel and Remy has it’s surprisingly touching moments. 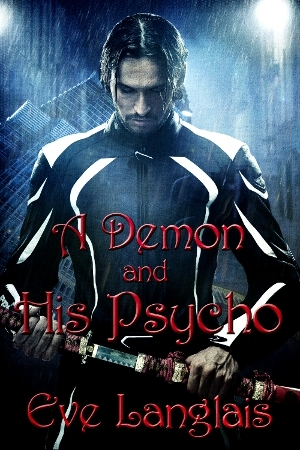 In order for love to work, even a demon and a witch in Hell need to trust each other for true love to blossom. They have to work pretty hard to get to their happily ever after. Even writing that seems strange–a happily ever after in Hell? But it happens for Ysabel and Remy. Since this is Hell, there’s a miserably ever after for others.

But the twisted way that Lucifer justifies his matchmaking is screamingly funny. After all, he can’t be good without explaining why his good time is going to be bad for someone else…eventually.

Pick this one up expecting a Hell of a good time. And a sequel, because Lucifer has matchmaking plans. Now that he’s been such a terrific success out-cupiding Cupid, he’s got another couple in mind. Look out for A Demon and his Psycho. I know I will. 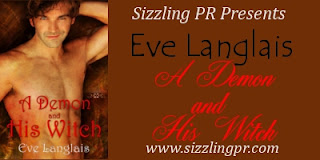 5 thoughts on “Review: A Demon and His Witch by Eve Langlais”