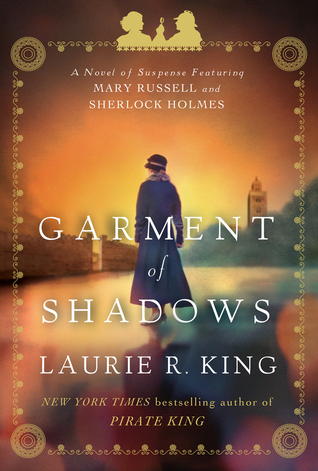 Laurie R. King’s New York Times bestselling novels of suspense featuring Mary Russell and her husband, Sherlock Holmes, comprise one of today’s most acclaimed mystery series. Now, in their newest and most thrilling adventure, the couple is separated by a shocking circumstance in a perilous part of the world, each racing against time to prevent an explosive catastrophe that could clothe them both in shrouds.

In a strange room in Morocco, Mary Russell is trying to solve a pressing mystery: Who am I? She has awakened with shadows in her mind, blood on her hands, and soldiers pounding on the door. Out in the hivelike streets, she discovers herself strangely adept in the skills of the underworld, escaping through alleys and rooftops, picking pockets and locks. She is clothed like a man, and armed only with her wits and a scrap of paper containing a mysterious Arabic phrase. Overhead, warplanes pass ominously north.

Meanwhile, Holmes is pulled by two old friends and a distant relation into the growing war between France, Spain, and the Rif Revolt led by Emir Abd el-Krim—who may be a Robin Hood or a power mad tribesman. The shadows of war are drawing over the ancient city of Fez, and Holmes badly wants the wisdom and courage of his wife, whom he’s learned, to his horror, has gone missing. As Holmes searches for her, and Russell searches for herself, each tries to crack deadly parallel puzzles before it’s too late for them, for Africa, and for the peace of Europe.

With the dazzling mix of period detail and contemporary pace that is her hallmark, Laurie R. King continues the stunningly suspenseful series that Lee Child called “the most sustained feat of imagination in mystery fiction today.”

So many shadows. The story begins in the shadows of Russell’s memory…she has been struck on the head and has forgotten who she is. All she knows is that she has enemies after her. If only her life were that simple. But it never is.

The shadows of the title are in this case a metaphor. There are many shadows. Russell’s memory clears up. Eventually.

But the year is 1925, and the place is Morocco. North Africa during the shadow war between the great powers, in that uneasy temporary cessation of hostilities between World Wars One and Two.

Russell came to Morocco at the behest of Inspector Lestrade to investigate a film company, but mostly because she is waging her own private little war with Brother Mycroft. This would not be conducive to good family relations under normal circumstances, but Mycroft Holmes has occasionally been, at times, the British government. At least the secret parts of it.

In Morocco, Russell and Holmes meet old friends from their travels in Palestine. The only problem is that they are not sure whether Ali and Mahmoud Hazr are there to plan an assassination, or to stop one.

Russell, for one, is very, very tired of worrying about the puppet-master in the shadows, manipulating her life, and the lives of those around her, thinking he knows what’s best for everyone. What if he’s wrong?

Escape Rating A-: What sticks in the mind at the end of this tale are two facets. One was the way that the story slid into historical events. This could have happened and would have left this little trace in history. This is just cool.

Then there’s the question that comes up so often, “the needs of the many outweigh the needs of the few.”  But when the decision is between this many over here and that many over there, the side with the bigger and better guns generally wins. “Might makes right” in other words. 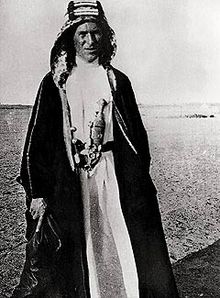 But might isn’t always right. The way that the Hazr brothers questioned the British treatment of the Moroccan people is intended as reminiscent of T.E. Lawrence (“Lawrence of Arabia”) with good reason. What may have looked reasonable from London was undoubtedly balderdash from a closer perspective. Think of the U.S. Revolution for an example that may be more familiar.

Starting the story with Russell in a mental fog made for somewhat of a slow start. She normally has a very clear and direct narrative voice; even when she doesn’t know where she’s going, she knows what she’s doing while she’s getting there. The story took a while to gather itself together as Russell reassembled herself. Once she remembered who and what she was, and the plan pulled together, the story took off!

5 thoughts on “Review: Garment of Shadows by Laurie R. King”