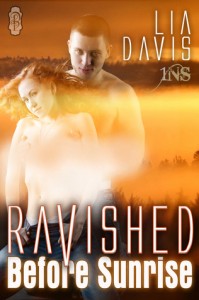 Born with the unusual ability to see what truly lies in the shadows, Emalee Black is stuck between two worlds, the paranormal and the human. Neither one accepts or understands her and she’s forced to live a quiet, boring life in hiding. When her best friend mentions 1Night Stand dating service, Ema chooses a role-playing adventure straight out of her romantic fantasies. She’s to hunt her very own vampire and have her wicked way him.

Vampire Darian Wyman is surprised when his daughter signs him up for a one-night stand with an exclusive matchmaking agency. At first he’s appalled by the idea, but as he reads the details of the date, he becomes intrigued. For one night he will get away from the life he has long grown tired of to be hunted and captured by a would-be huntress. But he has plans of his own for his little vixen.

However, when Darian discovers the truth about Ema’s inhuman abilities, the date could end before it gets started.

I’ve confessed this before, the 1Night Stand series is kind of a guilty pleasure for me. They’re short, and when they’re done well (and this one is done quite well) they manage to pack a naughty but nice little happily ever after into a tidy package. Whoever came up with this idea was a genius.

Emalee wants to be the hunter, just for one night. She wants to live out the fantasy in her paranormal romances, and hunt a vampire. She thinks it’s going to be make-believe, except that Ema has a secret. She knows there really are vampires. She can sense them. And shifters. And demons. Oh yeah, and her BFF is a witch.

Darian doesn’t want this little one night stand at all. But there is one woman on earth that he can’t say “no” to. His daughter. She bought it for him as a present. He’s been moping around a bit too long since his wife died. When you’re a vampire, a real one, being a widower can last pretty close to forever.

Escape Rating B+: Just plain fun. Absolutely marvelous decadent and deliciously sexy fun. Darian and Ema find so much more than they are looking for. Ema finds stuff she didn’t even know was available to be found, like the secret to her powers. She doesn’t even know what she is, and Darian opens up an entire universe to her. In return, she brings him back to life. Almost literally, she gives him a second chance at feeling alive. But I liked that it didn’t resolve immediately. The epilogue is 6 months later, so it’s insta-lust and insta-recognition, but not insta-love.

Good story for such a short package. I wish there were more. 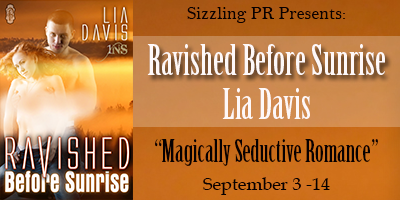 2 thoughts on “Review: Ravished Before Sunrise by Lia Davis”