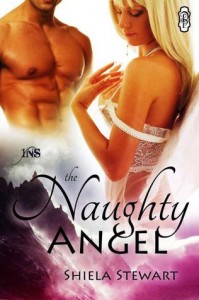 Even the good turn bad sometimes…

A life of servitude to God has left Ariel Raine feeling worn out. Being an Angel isn’t always what it’s cracked up to be. Day in and day out of the same routine tends to get tedious. Wanting some spice in her life, she sets her mind on discovering the allure of a sexual encounter. With the help of Madam Eve and her 1 Night Stand dating services, Ariel is about to have her world rocked.

Only problem is…her match is a demon.

Edison Grey has relied on dating services to claim minions for not only him, but for his master Satan as well. 1 Night Stand just happens to be this week’s preference. No use wasting a good service, Edison decides to have a little fun while he’s at it.

Stripping an angel of her purity is an added bonus…

What happens between Ariel and Edison is a surprise to both. Even with the threat of punishment looming over top of them. 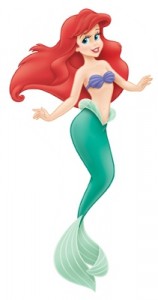 An angel who wants more than she has. She doesn’t want to just watch humans fall in love (and consummate that love) she wants to experience those feelings for herself. Any resemblance between the angel Ariel’s desire to explore human emotions and sensations, and the mermaid Ariel from The Little Mermaid, and her desire to experience the human world, may not be accidental.

They both wanted more than they had. And their perfect match to experience that “more” turns out to be their opposite. In the mermaid’s case, it was a human. In the angel’s case, it’s a demon. Who else would understand the supernal world she springs from, the pressures that she serves under?

And is it any wonder that the demon’s name is Edison? A name that we humans associate with discovery? Or that they are brought together by Madame Eve? Eve, who tempted Adam to eat from the Tree of Knowledge?

Because what Ariel wants is knowledge. She wants to know and experience more than she has, more than she is. Who better to teach her about desire than a demon? No other angel is remotely tempted to defy heaven, even in secret.

But Edison also wants more. He thinks he’s booked his 1Night Stand to harvest another soul for his master. He’s used dating services before for just such a harvest. But it’s all getting humdrum.

Instead, Ariel finds a demon who has a bit of sweet mixed in with a whole lot of naughty. And Edison discovers an angel who is hiding a surprising amount of naughty under her halo.

Can they stop fighting what they feel long enough to see if this insane match might work?

Escape Rating B-: Angel meets demon is probably the ultimate in opposites attracting. Ariel and Edison are on opposite sides in the definition of the war to end all wars. Her boss saves souls and his boss damns them. But they’re just foot soldiers, and they have been for centuries. And like soldiers everywhere, they have an awful lot in common.

Madame Eve has some seriously cool superpowers, whoever she is, to make this work.

But Ariel’s personality is pretty clear from the beginning. She likes her job (she watches over children) but she wants something more out of her life. She has a rebellious spirit that doesn’t quite fit. We don’t get quite as clear a picture of Edison, and why he’s willing to rebel.

The scenes where they begin their relationship are hilariously funny as well as hot. Edison is a foul-mouthed, well, demon. It’s expected. He’s also handsome as sin. Again, expected. But his attraction to Ariel’s innocence is a surprise. Maybe more of a surprise than her attraction to him. Good girls always fall for bad boys, at least in fiction. 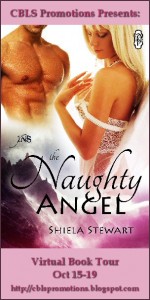 Still, this is one pair of opposites that you want to see ride happily off into the sunset. But I wonder what happens after that?

2 thoughts on “Review: The Naughty Angel by Shiela Stewart”