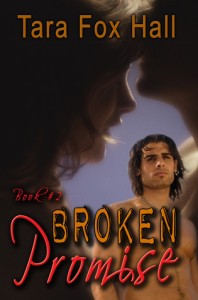 Shocked at Danial’s betrayal, Sarelle returns to her old home to consider her options. Yet even as Sar plans a reconciliation with Danial, Terian arrives, confessing his desire. When Theo witnesses Terian and Sar kiss, he angrily confronts Sar, leading to startling consequences. Will Sar’s heart choose Danial, Terian,…or Theo?

Broken Promise picks up right where Promise Me, the first book in the series, leaves off. (This is a hint that this review will contain spoilers for Promise Me. It’s difficult to review book 2 of a series without revealing a few things about book 1.)

The title is also a hint and a half. Danial broke all of his promises to Sar. Over and over and over. Have you ever heard the old joke about the three biggest lies? Number 1 is the one about the check being in the mail. Danial, even though he’s a vampire, managed to break number 3. The one that goes, “I can’t get you pregnant”. He took some really magic potions so he could. The big problem was the he forgot to tell Sar. She found out when she miscarried. Then she left his lying arse. Of course, this was after she gave him her oath of loyalty. It figures.

And the vampire is possessive. Of course he is. It’s all part of the power trip. He may actually love her, but his definition of love is very last millennium. And then there’s Devlin the Vampire King, who just so happens to be his brother. And a little bit too bwahaha crazy into the bargain.

So Sar and her oath to Danial, along with Danial’s lying to Sar, get caught in Danial’s power battle with his crazy brother. A battle that’s been going on for centuries. They’re vampires.

And even though Sar has given her oath to Danial, she realizes that she made a mistake in more ways than one, because she either doesn’t love him or falls out of love with him.

All along, she’s had a terrific, bantering friendship with the head of Danial’s bodyguards, Theo. Except that the banter has been concealing some feelings that are much more than friendship. And Theo isn’t a vampire. He’s a were-cougar. Sar seems determined to jump out of the frying pan and into the fire.

At least were-cougars are not immortal. Of course, that means that Danial might murder his former bodyguard. Unless the vampire king kills them all in a crazed fury first.

Danial was a mistake, and Theo, while he may be a much better guy, she’s still staying in the supernatural world where she keeps putting her life in extreme danger. Adrenaline-junkie, maybe?

Then there’s the half-demon, Terian, waiting in the wings.

While Darian’s conflict with his brother, Devlin, created a lot of the external tension, and ratcheted up the suspense factor, Devlin’s motives, or Devlin’s insanity, seemed a bit too over-the-top for this reader.

I did like seeing how Sar helped Theo resolve his issues with being a were-cougar. There was a lot of healing in their relationship that worked well. I enjoyed their banter from the beginning of the series. 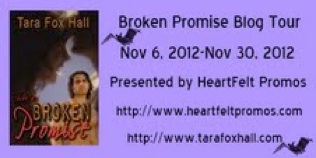