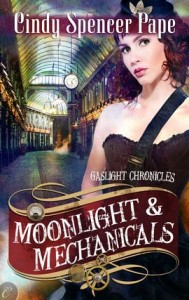 Engineer Winifred “Wink” Hadrian has been in love with Inspector Liam McCullough for years, but is beginning to lose hope when he swears to be a lifelong bachelor. Faced with a proposal from a Knight of the Round Table and one of her closest friends, Wink reluctantly agrees to consider him instead.

Because of his dark werewolf past, Liam tries to keep his distance, but can’t say no when Wink asks him to help find her friend’s missing son. They soon discover that London’s poorest are disappearing at an alarming rate, after encounters with mysterious “mechanical” men. Even more alarming is the connection the missing people may have with a conspiracy against the Queen. 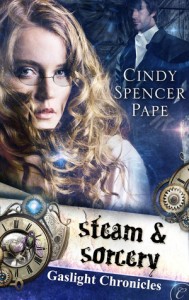 Moonlight & Mechnicals, even without being part of Cindy Spencer Pape’s awesome Gaslight Chronicles (see reviews of Steam & Sorcery and Kilts & Kraken) just by itself matches up what has to be one of the ultimate steampunk couples: the hero is a werewolf and the heroine is an engineer. Talk about awesome.

But the story does this pairing proud, as well as the previous bits we’ve seen of the Hadrian family-by-love that engineer Wink is very much a part of. Although that would be Lady Winifred Hadrian to the likes of you or me. But in Steam & Sorcery, Sir Merrick Hadrian rescued her, and the rest of her adopted siblings from the worst part of London, in the middle of fighting vampyres. 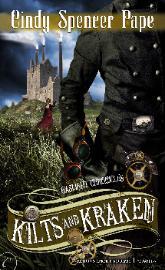 Wink’s ladylike exterior is just that, an exterior. She’s seen the worst that life has to offer. And just because she could become an idle society twit, doesn’t mean she’s constitutionally capable of it. Wink is still a genius engineer. And even though women can’t become actual Knights, she’s very much a valued employee. Her skills are too valuable to waste. But just because Wink has a career of her own doesn’t mean she doesn’t also want a home and family of her own. The only problem is that she’s been in love with Inspector Liam McCullough for years. Since the day he and Merrick rescued her, in fact.

Wink thought that Liam was waiting for her to grow up. That wasn’t it. She’s 24 now. Definitely grown up. Liam is swearing that he’ll never marry. A childhood filled with nothing but beatings, combined with the strength and temper of a werewolf, have left Liam afraid to let anyone close. Especially Wink.

Liam should have seen his protectiveness as a warning sign that it was already far too late for him. Instead he tries to help another man court her. And if this sounds like Cyrano de Bergerac, it should, and with similar results.

But while Liam is trying to avoid romantic entanglements with Wink, there is Order business that they must deal with together. People in the poor districts of London are going missing in alarming numbers, at the same time as mysterious sightings of mechanical men. It’s either magic or machinery, and that means trouble. There’s also a plot against the Crown, and the two things may be connected.

Can they solve the mystery of the missing citizens, discover the plot, save the Queen, and figure out what’s stopping them from being happy together, before it’s too late? The race to solve the mystery is every bit as enthralling as the romance in this adventure. 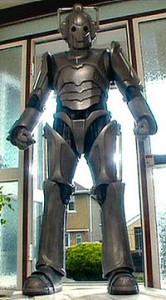 Escape Rating A: A werewolf, an engineer, a mechanical dog, and shades of Cyrano de Bergerac courting Roxanne. How much more fun could this story have gotten? Add in a dastardly plot to bring down Queen Victoria using mechanized men that sound a lot like something straight out of Doctor Who, that’s how!

The love story is the plot, and it goes from sad to happily ever after so, so well. Liam’s reasons for not wanting to marry do make sense from his perspective. He’s totally wrong, but completely understandable. And Wink’s attempt to settle for something less is heartbreaking for everyone, but necessary to provide Liam with the appropriate kick in the arse.

The anti-Monarchist plot makes a terrific mystery. Very convoluted, and kept me guessing right up until the end on some of the particulars.

This story ends on an absolutely lovely note. The point about the family that you make being as much, or possibly more, important than the one you are born to, particularly for Liam. <sniffle> 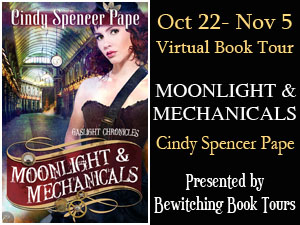