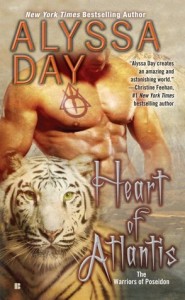 As a war wages between the immortals of Atlantis and those of the vampire realm, a Poseidon warrior fights to save his world—and the woman he loves. And no risk is too great.

The desires of a high priest.

Alaric, Poseidon’s High Priest, has made a vow to Quinn, the woman he loves and the leader of the Resistance: to save her friend Jack before his last bit of humanity has been drained. Should Alaric succeed, there’s one intimate danger: he may lose Quinn to the love of the man whose life he saved. But damn Atlantis to the nine hells, he’s willing to put Quinn’s wishes first, regardless of the consequences.

The warning of a threat reborn.

The final jewel of Poseidon’s trident has turned up in the hands of mysterious Ptolemy Reborn, who claims to be descended from Atlantean royalty. He’s about to reveal to the world that Atlantis is real, positioning himself as king. But this magical terrorist is bent on chaos. The only warrior who can stop him is following his own path, driven by the even more powerful force of love. Atlantean powers over the sea could prove just as cataclysmic—for Quinn’s love, Alaric might drown the entire world.

Alaric has been Poseidon’s High Priest for over 500 years. It’s a very, very powerful job, with one tremendous drawback–the High Priest has to be celibate. As bad as that sounds, he managed to get used to it, well sort of used to it, by walling himself off from his emotions. (It turns out you really can channel all that energy into power, at least if you’re a Warrior of Poseidon!)

Then Prince Conlan brought home his human bride, Riley, and Alaric met Riley’s sister Quinn, the leader of the human resistance against the vampires. Quinn was his soulmate, but as the High Priest, Alaric couldn’t claim her.

Que up 7, count ’em 7 books of angst for Alaric and Quinn, while all the other Warriors found their soulmates. Even the one who was cursed not to feel any emotions at all! Talk about torture…

Heart of Atlantis is Alaric and Quinn’s chance at a happy ever after. But, since there is a very real fear that if Alaric gives in to the temptation that Quinn represents, he’ll lose his power, their HEA is wrapped up in the resolution of the series.

They need to find the final stone for Poseidon’s trident, and Atlantis must rise from the depths of the oceans to take its place among the nations of the world.

Of course, there are obstacles. Not just their old enemy Anubisa, queen of the vampires, but there’s a new guy on the block. He calls himself Ptolemy Reborn, and he outs the Atlanteans before they are ready, and exposes Quinn as the leader of the resistance. But the good guys don’t know who he is or even what he is. He’s not vampire, and he’s not demon. So where did he come from and why does he care about their squabbles and their gods?

Meanwhile, Quinn’s best friend, Jack, has retreated to his tiger form and refuses, or is unable, to turn human again.

Can this universe be saved? Before the dome over Atlantis cracks completely and everyone drowns?

Escape Rating B-: This wasn’t quite as much fun as I hoped it would be when I saw that Day was wrapping up the series. The individual stories have been tons of fun, but there were too many plot threads in the air for this last book, and the story felt scattered.

Ptolemy Reborn’s origins came out of nowhere. His obsession with Quinn, and with this world, was never fully explained. It would have made more sense plot-wise if Anubisa were the driving force again, or at least one of her kind. His cannon was a little too loose, in more ways than one.

Alaric and Quinn spend the whole story running all over the place and debating whether they should or shouldn’t. Then they get interrupted just as they’re about to make love. It’s funny the first time, maybe the second, then it gets annoying. Also, they’re adults and they never seem to have a rational discussion about the elephant (maybe that should be pod of whales) in the room.  And when they finally do manage to consummate their relationship, what should be the epic love scene of all time gets rather short shrift.

It was great to have all the Warriors come back to Atlantis for the final raising of the continent. That was cool. What was not cool was the way that Jack just walked off alone at the end, alone and lonely. I need to know that there’s someone for him in the future.