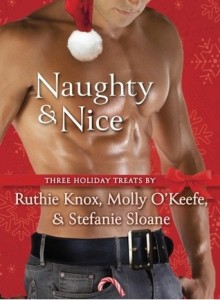 ’Tis the season for romance with three original holiday-themed novellas! Unwrap this festive eBook bundle and discover why these authors are quickly becoming the biggest names in the genre. Ruthie Knox tells a heartwarming contemporary story of first loves given the gift of a second chance; Molly O’Keefe releases the ghosts of Christmas past with a prequel to her novel Crazy Thing Called Love; and Stefanie Sloane weaves an irresistible Regency tale of fiery passion that burns deep on a cold winter’s night.

ROOM AT THE INN by Ruthie Knox

Carson Vance couldn’t wait to get out of Potter Falls, but now that he’s back to spend Christmas with his ailing father, he must face all the people he left behind . . . like Julie Long, whose heart he broke once upon a time. Now the proprietor of the local inn, Julie is a successful, seductive, independent woman—everything that Carson’s looking for. But despite several steamy encounters under the mistletoe, Julie refuses to believe in happily ever after. Now Carson must prove to Julie that he’s back for good—and that he wants her in his life for all the holidays to come.

ALL I WANT FOR CHRISTMAS IS YOU by Molly O’Keefe

Maddy Baumgarten and Billy Wilkins are spontaneous, in love, and prepared to elope the day after Christmas—that is, if Maddy’s family doesn’t throw a wrench in their plans. After all, Maddy’s barely out of high school and Billy’s a notorious bad boy. Maddy doesn’t care about Billy’s rough past—all she cares about is living in the here and now. But after Maddy’s mother stops speaking to her in protest, and a Christmas Eve heart-to-heart with her father leaves her with butterflies, Maddy starts to get cold feet. She loves Billy, but is she taking this big step too soon?

ONE PERFECT CHRISTMAS by Stefanie Sloane

After being jilted by her fiancé, Jane Merriweather turns to her dear childhood friend, the Honorable Lucas Cavanaugh, for support—and unlocks the smoldering desire simmering in the man’s troubled heart. Frightened by his newfound feelings, Lucas flees to Scotland. But when the Christmas season brings them together again, one glance is all that’s needed to reignite his yearning. If Lucas can convince Jane that his intentions are as pure as the falling snow, they’ll turn a dreary December into a joyous Yuletide affair.

‘Tis also the season for Holiday anthologies, as Loveswept gets into the swing of the holidays with this trio of Christmas themed stories. Unlike the Carina Press holiday bundles, these stories are not available separately, so if you want one, you have to get them all.

I say that because, as with so many story bundles, one person’s cuppa tea is another person’s day-old coffee grounds. But this holiday treat is priced as a virtual stocking stuffer at $1.99, so it’s not a big deal. Or it’s a great deal, take your pick.

Speaking of picks…the pick of this litter is Ruthie Knox’s contemporary story, Room at the Inn. It’s also the longest story, so Ms. Knox has the most time to develop her characters and her background. Inn takes the second-chance at love theme and really works it. Carson and Julie are on more like their tenth chance. Maybe their twentieth. Carson comes back to his small upstate New York home town as seldom as possible, because two things always happen; he fights with his father, who he feels like he always disappoints, and he falls into bed with Julie, who he always leaves. He knows he’s breaking her heart every time, but he can’t resist her. And vice-versa. But he can’t stay in Potter Falls. He has an important job. One that takes him as far away as possible.

Until his father manufactures a breakdown, and forces him back for longer than 10 days, and life wraps him back in the place he left behind. He finally stays still long enough to see that his home, his old friends, his old frenemies, and even Julie, are not quite the same people he thought they were when he was 20, not now that he’s 35. And neither is he.

Escape Rating for Room at the Inn: A- 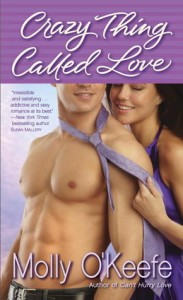 Molly O’Keefe’s All I Want for Christmas is You is a prequel short story to the third book in her Crooked Creek Ranch series, Crazy Thing Called Love. And it felt very short and slightly incomplete to me. There was too much backstory that I didn’t know about the town and the people, and I didn’t feel for why Maddy wanted to rescue Billy quite so badly that they HAD to get married on her 18th birthday. Too many of the motivations behind the events were missing for me. Especially since I know that this is not a happily ever after, just a set up for a later story.

Escape Rating for All I Want for Christmas is You: C-

The last story in the group is Stefanie Sloane’s One Perfect Christmas. This one is a Regency romance, and also a friends into lovers story. This one drove me crazy! It wasn’t long enough. I could tell that there was oodles of backstory between Jane and Lucas, but we only catch glimpses of it. They were childhood friends, having grown up on adjoining estates. But she’s loved him forever, and he never realized it until recently. Now she needs to marry for money, and would love to marry him. He even has money. It would be perfect. But only if he also loves her, which he does. Misunderstandings abound. There’s even a wandering donkey for comic relief.

This is a case of the story being bigger than the format allowed. I needed more!

Escape Rating for One Perfect Christmas: B