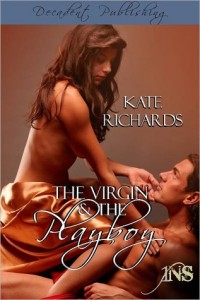 Julie, accidental virgin, has waited longer than she ever planned to lose her virginity and join everyone else she knows in dating reality. Embarrassed at her plight, she has made arrangements with 1NightStand.com to meet with a handsome stranger for one night of no commitment required sexuality, without having to admit she’d never made love before.

Mark is the one single guy left in his group of friends. As such, he is known for the bevy of lovelies he dates, and his stories of wild exploits between the sheets. His participation in 1NightStand.com is on a dare, and he has no idea that his date is…less experienced than he is used to. And so much more…

When they enter the penthouse suite in Las Vegas, they enter a chamber designed for luxury and booked for a 1NightStand. 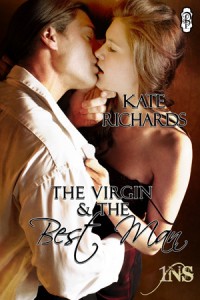 Mark and Julia from The Virgin and the Playboy have set the date! They are to be married at The Castillo Las Vegas, where they met on their 1Night Stand. All their family and friends are invited and they have planned a special surprise for their maid of honor and best man.

Karin, Julia’s cousin, a small town librarian, chose family obligations over her dreams of the stars. She loves them all, but wonders when it will be her turn to live as she wishes…if it isn’t too late.

Ray, commercial pilot, is every bit as much a playboy as his brother Mark used to be. He isn’t opposed to finding The One, but fears his brother has collected the only perfect jewel.

What more appropriate gift for these two than a 1Night Stand with a date personally selected for them by Madame Evangeline.

Did the heroines have to be virgins? Really? I ask you?

It’s like this. I found a promo email from Decadent Publishing about the latest 1Night Stand titles while I was in the airport last week, and The Virgin the Best Man looked irresistible. Well, my resistance was down. Waking up at 5 am to catch a plane will do that to me.

The 1Night Stand series is a not-so-secret vice, and the heroine is a librarian. (But still, virgin? Never mind.) As the sequel to The Virgin and the Playboy, I let the Best Man and the Playboy twist my arm into buying the first book. Quick download in airport (I love my iPad with 3G).

Hauling my train of thought back onto the track…

In The Virgin and the Playboy, Julia Hooper signs up with Madame Evangelista’s 1Night Stand service to get rid of an “inconvenient accessory,” as she terms her virginity. She’s out of college and has reached the point where not having already “given it up”, the questions she faces from any man she dates about why she hasn’t have reached beyond inconvenient. So she signs herself for a one-night stand with an experienced man who will show her the ropes. She wants a playboy who will know what to do, and who she assumes she won’t like.

Mark turns out to be a sweet guy who has reached the point in his life where an endless line of nipped, tucked and fashionably chic (also model-thin) women, all alike has become boring. Julia is refreshing and natural and above all, real.

Together they discover an old truism, that it is difficult to make love without feeling at least a little love. They both feel a lot. They discover what they’ve both been missing. The story is short and surprisingly sweet for what it is.

One year later, Mark and Julia are ready to get married, and they invite their best friends. Did Julia’s best friend have to be a virgin too? And a librarian? Stereotype much? (I digress.)

Mark and Julia sign their best friends, their best man and maid of honor, up for 1Night Stands. It worked for them, why not pass along the gift? So to speak.

Mark’s best man, Ray, is a pilot who really doesn’t think very much of himself. And Karin, poor Karin, is a small-town librarian who acts as if she signed a morals contract when she took her job. (Real-life librarianship isn’t like this. Honest!)

Where this story takes flight is when these two lost souls start to tell each other their hopes and dreams. Karin wanted to be an astronaut. She studied for it, she had a scholarship, but her parents guilted her into setting her dreams aside to take care of an aging relative. Her spirit has been grounded ever since.

This story is really about Karin finding another way to learn to fly.

Ray needs to take a chance on himself. He needs to believe that he’s good enough for someone to love. Both of these people are wounded, and they need to believe in each other.

The fun thing about this story is that you’re never 100% positive that either of them was the intended 1Night Stand for the other. They take matters into their own hands and make  things work the way they want them to.

And they fly off together into the wild blue yonder.

Escape Rating for The Virgin and the Playboy: B-

Escape Rating for The Virgin and the Best Man: B+