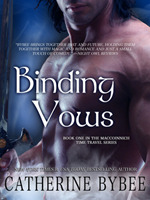 Duncan MacCoinnich’s task… Travel to the twenty-first century Renaissance Faire, deflower the Druid virgins, and go home. Only his job is not so easily accomplished with the virgin in question, Tara McAllister. Time is running out. The evil is closing in on them both. Tara finds Duncan irresistible after what was supposed to be a mock Hand-fasting binds them. When Duncan whisks her to his home in Scotland she could accept that. But, can she forgive him for taking away her modern life when she finds herself in the sixteenth century? And is it love they feel? Or something else?

Time travel romances are always much more interesting when they gloss over the means by which the time travel happens and skip straight to the part where the characters deal with the effects of the time travel.

Time travel generally strains the willing suspension of disbelief. The more an author tries to explain something that is inexplicable, the more it generally takes me out of the story. Time travel is magic, or close enough. I want to move on and read about people dealing with the result.

Renaissance Faires are also magic, admittedly of a much more mundane kind. The 16th century, or thereabouts, with all the beautiful costumes but without all the horrible smells and diseases. And with flush toilets, or at least Port-a-potties. (Forget what I said about no horrible smells!)

So, Binding Vows is a time travel romance that doesn’t get into all the gory details about how the time-travel gets accomplished. Excellent! In fact, our time-traveling heroes don’t initially reveal that they are time-travelers. The Ren Faire gives them the perfect opportunity to blend in with the locals.

Unfortunately, they’re not the only ones blending in. Duncan and Fin are at the Faire because they’re keeping an eye on an evil sorceress named Graina. She’s pretending to be a Gypsy fortune-teller.

But then, they’re pretending to be 21st century dudes who just happen to like dressing up as knights.

Instead, they’re all Druids. Graina, calling herself Gwen, is on the lookout for a virgin with Druid bloodlines who can restore her powers. Let’s just say that the sacrifice required of the virgin will not be a willing one.

Duncan and Fin come to the Ren Fair every year to make sure that there aren’t any virgins available. On the rare occasion that they do manage to find a 21st century virgin, any sacrifices that they make to the cause are very willing indeed. And lots more fun.

Until Duncan meets Tara McAllister, a 25-year old virgin who resists his seduction, but calls to his heart. Tara wants more than a one-night stand, she’s looking for someone who will stand by her. Someone different from the boy-man who abandoned her sister when she became pregnant, and different from the father who threw them both out.

But Duncan knows he has to return to his own time when the Faire is over, and he can’t rip Tara from her own century, her own life. But once Graina sets her evil eye on Tara, he realizes he has no choice. And that he wants none. He wants Tara for himself.

It’s only after he carries Tara to his home in the 16th century, barely one step ahead of the evil witch, that he understands that the woman he has come to admire, and maybe even love, may never forgive him for ripping her out of time.

And he learns that the evil his family has fought for centuries has followed them home.

Escape Rating B+: The time travel parts of the story were terrific! When Tara is carried back in time, I really felt for her confusion, her anger and her grief. Her old life is dead, and she has to start over. Even if she accepts why it happened, she’s lost everyone she ever loved. She needed to mourn.

The relationship between Tara and Duncan takes time to develop. There’s attraction, but it needs time to grow into something more. What I found a bit unrealistic was just how, well, unrealistic Tara was about the position of women in the 16th century. However equal Duncan treated her in private, in public the expectations would be different. The world wasn’t going to change just because she was from another century, especially if that had to be hidden.

Duncan’s family is a joy. It was great to see Tara develop a loving relationship with other people in his family, especially his mother and his sisters. After reading a lot of stories where all the characters come from dysfunctional families, it was fantastic to see a totally functional one!

As a side note, if you liked the idea of magic at a Ren Faire, Emma Bull’s classic urban fantasy, War for the Oaks, also hinges on the magic of a Ren Faire. If you’ve never read it, indulge yourself. You’ll thank me. Really. 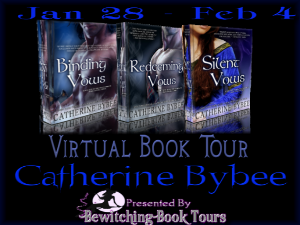