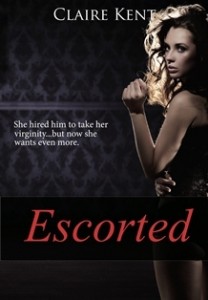 She hired him to take her virginity…but now she wants even more.

Lori might be a popular romance writer, but she’s never been anything but a flop with sex and love in her personal life. Still a virgin at twenty-six and increasingly frustrated by her inexperience, she decides to take matters into her own hands. She hires a talented, sexy male escort to take care of her inconvenient virginity.

She assumes one time with Ander will be enough, but she never dreams how much pleasure he can make her feel. Once isn’t nearly enough. Twice isn’t enough either. Soon, she becomes one of his regular clients.

Lori knows that nothing would be as foolish as falling in love with her paid escort, but she’s never been wise with her heart. And, despite his professionalism, he doesn’t seem entirely immune either.

I finally decided to dive into Clare Kent’s Escorted after reading an interview with the author at the fabulous Wonk-o-Mance.

There are reviews everywhere, and I’m about to add mine to the pile. Escorted is one of those cracktastic stories. Once you start, you’re having too damn much fun to stop.

The premise is beyond crack. Twenty-six-year-old virgin romance writer hires high-class male escort to relieve her of pesky virginity. (Someone needs to explain why the woman has to be a virgin in this situation, but when it’s a man, he can merely be rich)

Instead of a single “business transaction”, formerly virgin author Lori decides that she needs more experience, and well, escort Ander is damn good at his job. She makes another appointment. 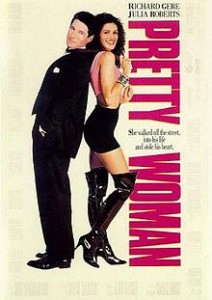 Her friends joke with her about playing a reverse on the movie Pretty Woman. And there are a lot of intentional parallels. From the very beginning, Lori never asks Ander to pretend they’re playing out any romantic fantasies. She wants to learn what to do. It’s not clinical, but it’s not romantic, either.

On the other hand, when he’s not pretending to be anyone other than himself, part of what Lori is inadvertently learning is a bit of who is really is, and how to please him.

Also how damaged he is under the polished and urbane surface.

Escape Rating B: I couldn’t stop reading this. I kept picking up my iPad, and it was not fair. We had company! But I just couldn’t stop.

But on the more critical side… having said the story is crack, what’s so cracktastic about it? This is definitely a reverse Pretty Woman, with several twists, something that is lampshaded multiple times in the story. Successful author Lori choses male escort by referral. Nothing so tacky as Richard Gere picking up a hooker on the street in Pretty Woman.

And Lori keeps her business arrangement with Ander totally separate from her real life, where Gere’s character hires the hooker to be his date for a business conference, and is extremely up front about what she’s there for.

Ander is hiding just how damaged he is on the inside. His relationship with his father and just how rotten his father is, not just as a father, but as a human being, and how that influenced Ander’s choice to become an escort. 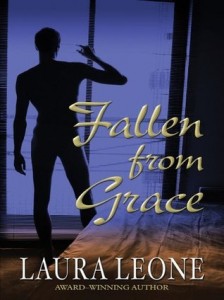 Ander’s backstory reminded me a bit of Laura Leone’s excellent Fallen from Grace.  In that story the male prostitute falls in love with a woman who is not a client and who does not initially know what he does for a living. He tries to get out of the life and violence ensues. (Laura Leone is an early penname for Laura Resnick)

The very last scene, the one where they were both finally able to show the emotion they felt, that one packed a punch.