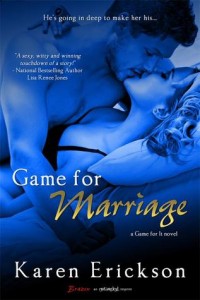 He’s going in deep to make her his…

Struggling artist Sheridan Harper never imagined she’d spend a sizzling night with Jared Quinn, the smoking-hot star quarterback of her local professional football team, the San Jose Hawks. And she’s even more shocked when Jared’s publicist offers her a proposition: a fake marriage to keep Jared out of the gossip mags. Being that close to Jared would be too tempting, so to protect her heart, she insists on secretly including a clause forbidding sex between them.

Jared just wants to keep his starting QB job and keep it in San Jose. His reputation as a ladies’ man has landed him in the headlines one too many times, but there’s something about his kind, passionate new wife that tempts him beyond reason. Any sort of intimacy between them is completely forbidden, but as their bodies fall in deep, will their hearts follow suit?

In order to be able to truly enjoy this story, you have to be willing to throw your willing suspension of disbelief a lot farther than one of star quarterback Jared Quinn’s game-winning passes. And Jared is a damn good quarterback.

The sexual chemistry and emotional tension between quarterback Jared and artist Sheridan is hot and sweet. They hook up for a one-night stand, and they’re never able to forget that they have something explosive, no matter how much craziness the plot or other people throw in their way.

Because they get stuck with each other for a protracted period of time, even with Jared’s frequent absences for practice and to travel for away games, they have a chance to get to know each other as people. They discover that they actually “like” each other and enjoy doing things together. For different reasons, neither of them has ever given a real relationship much of a chance. Their crazy situation forces them to.

The story is a “marriage of convenience” story. These are hard to do in contemporary romances. The premise for this one seemed like it should be sacked. Jared needs a “fake wife” to clean up his off-the-field reputation because he was photographed with a rival’s wife in his lap. Big deal. In real life, the star quarterback does not get traded for this.

To make this situation more insane, there’s Sheridan’s side. At first Sheridan seems like a woman in charge of her own life. She may be too busy to get involved with anyone, but she knows who she is and what she wants. She meets Jared and practically turns into “fangirl”. She might be a struggling artist, but agreeing to a “fake marriage” for a year to the man she just slept with? And insisting on a sexless marriage with the man she just had mind-blowing sex with?

I just couldn’t buy into the arrangement that made this whole story work.

Escape Rating C+: Jared and Sheridan do fall in love, and that part of the story was sweet. But the way they reached that point was contrived and unrealistic.

Also, Jared is a professional football player, but this didn’t feel like it was talking about football. Except for the game schedule, this could have been any sport.

The secondary characters involved with the team were unrealistic. No owner fires his star quarterback over one questionable picture in the tabloids. And the whole “fake marriage” contract was bound to be exposed and be worse than any picture. Not to mention that the PR guy who came up with it was such a hybrid of every sleazy PR character ever written as to be even more fake than the marriage.

I wanted to like Game for Marriage more, but the forward pass was intercepted by the unrealistic starting motion.