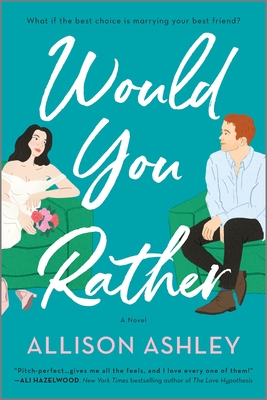 Noah and Mia have always been best friends, and their friendship is the most important thing to them. Life is going great for Noah and he’s up for a promotion in a job he loves. But Mia’s life is on hold as she awaits a kidney transplant. She’s stuck in a dead-end job and, never wanting to be a burden, has sworn off all romance. So when the chance of a lifetime comes to go back to school and pursue her dream, it’s especially painful to pass up. She can’t quit her job or she’ll lose the medical insurance she so desperately needs.
To support her, Noah suggests they get married—in name only—so she can study full-time and still keep the insurance. It’s a risk to both of them, with jobs, health and hearts on the line, and they’ll need to convince suspicious coworkers and nosy roommates that they’re the real deal. But if they can let go of all the baggage holding them back, they might realize that they would rather be together forever.

The United States is the ONLY wealthy, industrialized nation on this planet that does not provide universal health care. And that is what honestly makes the U.S. health insurance industry the big, scary, and all too real villain in this romance.

But Mia has a life-threatening chronic illness. Her kidneys are slowly but inexorably failing. Her condition is currently managed by expensive medications and occasional hospital admissions for flare-ups, but it’s manageable. At least so far.

She does need a kidney transplant, and her life has in many ways been on hold since she was diagnosed. Two of the specific things that she has put on hold are her career aspirations and any possibility of romance.

Mia does not want to kill anyone else’s hopes and dreams the way she did her parents’. Not that they see it that way. At all. But when she was diagnosed in her late teens, their savings were pretty much completely wiped out by the cost of her care that wasn’t covered by insurance. She just isn’t willing to do that to any potential romantic partner.

She dropped out of college when she was diagnosed – not surprisingly as it was a LOT to deal with. She’s stuck in a dead-end job because she needs the excellent health insurance the company provides. Without it, she will, quite literally, die.

The job has several good points and one really bad one. She is the administrative assistant at the architectural firm owned by Noah’s dad where Noah himself works. BUUUUT, one of the other architects is a douche who seems determined to make her miserable and puts her down at every turn. (There’s a bubbling vat of acid waiting in the wings for him, I swear.)

So, when she gets a scholarship for mid-career learners to return to college and finish the degrees they abandoned, she wants to take it. But she can’t. Because (insert evil villain music here) she needs the insurance from her job.

And that’s where this story both kicks off and goes just a teensy bit off the rails.

Noah offers to marry her so she can stay on his insurance and chase her dream of becoming a pediatric nutritionist, a job that will also pay at least twice what she’s making now and undoubtedly come with its own excellent insurance. Or, she’ll get a transplant which will automatically qualify her for Medicare – again solving the insurance problem. (The real crime in this story is that SO MUCH is caused by the evil insurance companies!)

What they are planning is a marriage of convenience, 21st century American style. Or so it seems. What they actually get turns out to be anything but.

Escape Rating B-: There’s so much of this book that is so good. It’s a terrific friends-into-lovers and fake relationship romance rolled into a lovely story, and those tropes are classics for a reason.

Noah and Mia have been besties for-literally-ever. Their deep friendship is the foundation on which both of their lives are built. They are each other’s person in some seriously profound ways. That they both want more but are too afraid to admit it because of the consequences if it doesn’t work out feels real. They know they belong together, but they have both made the decision that being together as friends is enough – or at least that it’s not worth the risk of trying for more because neither of them can face the thought of ending up with less.

Where the story sent me into a ranting internal monologue was in the nature of the “fake” of their fake relationship. They’re not the first or the last people, undoubtedly in real life as much as in fiction, to have married out of something other than romantic love. The problem in the story is that it conflates the issues involved in faking a Green Card marriage with marrying to get insurance.

Their marriage isn’t fake or a con. It’s a real marriage, with real legal documentation. They share a real house and a real life. Whether or not they ever plan to have sex or romance is not the insurance company’s problem and they are NOT committing fraud. They ARE married with all the legal consequences and legal responsibilities thereunto.

The real, true issue in the story is the lies they tell to their friends, their families and most importantly, Noah’s employer. Who is also his dad and they do have a good relationship which means that Noah could have been upfront about this mess from the beginning. But the story treats the reason for their marriage and their intention to dissolve it after Mia completes her education as the big bad sin, when it isn’t. It’s the lying that is both the sin and the thing that’s going to trip them up over and over until it’s dealt with.

So the blurb and at least the first third of the story make it seem as if their so-called “fake” marriage is the problem when the real, true problem is that they lied about it. And that they’ve been doing a whole metric ton of lying about a whole lot of very real issues – to themselves and each other most of all.

Where the story gets both very, very good and in many ways very, very sad is that once the first lie gets exposed, all the cats claw their way out of all the bags and they both have to deal with all the issues they’ve been hiding from themselves. And papering over by being so invested in their friendship that they let each other bury some real and serious shit that is painful to deal with and is only going to be more painful for being hidden.

So there’s a LOT to unpack in this story. It’s not nearly as bright and breezy as the blurb might lead you to believe. It is seriously NOT a rom-com. And it would have been a lot better – and a lot less frustrating (and this review would be a lot less ranty) if it had started out by focusing on the real culprits in the mess.

Once it finally gets on the path it should have been on in the first place, the story of two people who have loved each other nearly all their lives who have been living a pretense that suddenly becomes real, the story has a whole lot of charm along with a marvelously cathartic resolution and a solidly earned HEA.

One thought on “Review: Would You Rather by Allison Ashley”