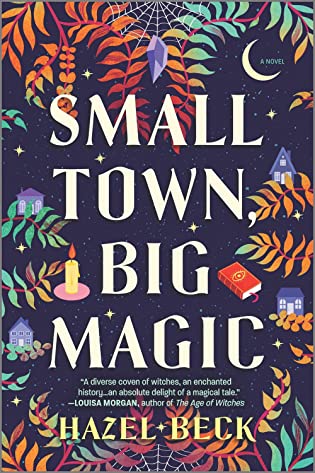 For fans of THE EX HEX and PAYBACK'S A WITCH, a fun, witchy rom-com in which a bookstore owner who is fighting to revitalize a small midwestern town clashes with her rival, the mayor, and uncovers not only a clandestine group that wields a dark magic to control the idyllic river hamlet, but hidden powers she never knew she possessed.

No one has civic pride quite like Emerson Wilde. As a local indie bookstore owner and youngest-ever Chamber of Commerce president, she’d do anything for her hometown of St. Cyprian, Missouri. After all, Midwest is best! She may be descended from a witch who was hanged in 1692 during the Salem Witch Trials, but there’s no sorcery in doing your best for the town you love.Or is there?
As she preps Main Street for an annual festival, Emerson notices strange things happening around St. Cyprian. Strange things that culminate in a showdown with her lifelong arch-rival, Mayor Skip Simon. He seems to have sent impossible, paranormal creatures after her. Creatures that Emerson dispatches with ease, though she has no idea how she’s done it. Is Skip Simon…a witch? Is Emerson?
It turns out witches are real, and Emerson is one of them. She failed a coming-of-age test at age eighteen—the only test she’s ever failed!—and now, as an adult, her powers have come roaring back.
But she has little time to explore those powers, or her blossoming relationship with her childhood friend, cranky-yet-gorgeous local farmer Jacob North: an ancient evil has awakened in St. Cyprian, and it’s up to Emerson and her friends—maybe even Emerson herself—to save everything she loves.

Once upon a time (mostly in the 1980s and 1990s) there were a whole lot of books telling stories about people (usually young women) who discovered that the mundane world all around them hid secret places and even more secretive people filled with magic – and danger. And that the protagonist of those stories either belonged in those magical places or discovered them or had to save them.

Or all of the above.

Emerson Wilde used to read all of those books, tucked inside the safe and comforting shelves of her beloved grandmother’s bookstore, Confluence Books. But her grandmother has passed, and left the store, her quirky Victorian house, and her legacy to Emerson.

Even if Emerson doesn’t remember the full extent of that legacy or her family’s place in St. Cyprian Missouri, a beautiful little town that sits at the confluence of the Mississippi and Missouri Rivers.

Emerson thinks of St. Cyprian as a magical little town, one she’s proud to be a part of as a small business owner and president of its Chamber of Commerce. She doesn’t know the half of it.

But she’s about to find out.

Escape Rating B: Just like Emerson, I read all those books too, which meant that I sorta/kinda knew how this one was going to go. If you took a selection of those books and threw them in a blender with A Marvelous Light by Freya Marske, Witch Please by Ann Aguirre, Her Majesty’s Royal Coven by Juno Dawson and just a bit of Manipulative Dumbledore-style Harry Potter fanfiction you’d get something a lot like Small Town, Big Magic.

Not that that’s a bad thing, as each of those antecedents has plenty to recommend it. And if you like any of them you’ll probably like at least some parts of this first book in the Witchlore series.

But as much as I loved the premise – or most of the premises – that make up this story, there were a few things that drove me utterly bananas.

Many of those original urban fantasy-type stories focus on a relatively young protagonist who has their world view overturned when they learn that magic is real, all around them, and that they have at least some of it.

Emerson’s “unbusheling” as it’s called in A Marvelous Light isn’t like that at all. Because she did know about magic until she was 18 – and that’s where the Harry Potter fanfiction reference comes in. Emerson’s memory of magic was wiped because she failed a test of power – and that whole scenario is suspicious in a way that does not get resolved at the end of this first book in the series.

Second, she is an adult when her memories come back after an attack by a magical creature. The tragedy of this story is that her closest friends have all stayed with her, stayed her besties, for the decade or so that her memory has been gone. And they’ve all retained their magic, their complete memories, and have kept the secret. The thought of that compromise is kind of hellish, that they all loved her enough to stick by her – and that they all feared the witchy powers-that-be enough to keep her utterly in the dark about the truth of their world.

So when Emerson’s powers start coming back, her friends are equal parts scared and thrilled. Thrilled they can finally be their full selves around her. Scared that the powerful witch council will learn that she’s broken the memory block and that they’ve all told her all the things they promised not to tell under threat of their own memory wipes – or worse.

And they are collectively even more frightened because Emerson’s powers must have returned for a reason. A reason that is likely to be even bigger and more threatening than whatever that council will do to them.

What kept making me crazy was that in the midst of all this her friends were just as over-protective and condescending as any of the adults assisting a young first-time magic user are in any of those stories from the 80s and 90s. The situation frustrated the hell out of Emerson, and I was right there with her.

I also think it made her learning curve drag out a bit more than the story needed.

But there’s something else, and it looms even larger now that I’ve finished the book. There are two antagonists in this story. The first, and the largest by nature, is, quite literally, nature. An evil menace is filtering into the confluence of the rivers that sustain the magic of not just St. Cyprian, but the entire magical world. Emerson’s powers have emerged because it is her task to lead the coven that can stop it – even if she has to sacrifice herself in the stopping.

Howsomever, the focus through the entire story is on the other big bad – that leader of the local council who memory-wiped Emerson, exiled her sister Rebekah, drove her parents out of St. Cyprian and has generally been manipulating the entire town through her coven/council for some reason that has not yet been revealed.

And isn’t revealed by the end of the story. So everything ends on a ginormous freaking cliffhanger. The evil menace in the waters seems to have been dealt with – at least for now. But the council has just arrived to deliver what their leader believes is a well-deserved smackdown for saving everyone’s asses.

Literally just arrived as the book doesn’t so much end as come to a temporary and frustrating halt in mid-looming threat.

And we still don’t know what the root cause of that conflict even is. The ending isn’t satisfying. I need to know why the leader seems to have had it in for Emerson and her entire family long before the events of this book. The evil in the water, as much as it needed to be eliminated, wasn’t personal – at least as far as we know. It needed to be resolved but it’s difficult to get invested in. I’m invested in seeing that manipulative witch get exactly what’s coming to her. And I didn’t even get a hint.

Hopefully the answers – or at least some of them – will be revealed in the second book in the series, Big Little Spells. Because I’m salivating for some just desserts to be served.