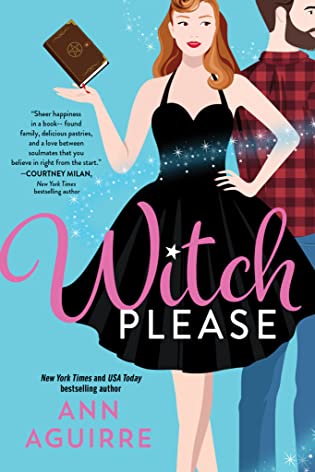 Practical Magic meets Gilmore Girls in this adorable witchy rom-com with:
• A bisexual virgin baker with a curse• A witch looking to avoid romantic entanglements• And a chemistry between them that causes literal sparks

Danica Waterhouse is a fully modern witch—daughter, granddaughter, cousin, and co-owner of the Fix-It Witches, a magical tech repair shop. After a messy breakup that included way too much family “feedback,” Danica made a pact with her cousin: they’ll keep their hearts protected and have fun, without involving any of the overly opinionated Waterhouse matriarchs. Danica is more than a little exhausted navigating a long-standing family feud where Gram thinks the only good mundane is a dead one and Danica’s mother weaves floral crowns for anyone who crosses her path.
Three blocks down from the Fix-It Witches, Titus Winnaker, owner of Sugar Daddy’s bakery, has family trouble of his own. After a tragic loss, all he’s got left is his sister, the bakery, and a lifetime of terrible luck in love. Sure, business is sweet, but he can’t seem to shake the romantic curse that’s left him past thirty and still a virgin. He’s decided he’s doomed to be forever alone.
Until he meets Danica Waterhouse. The sparks are instant, their attraction irresistible. For him, she’s the one. To her, he’s a firebomb thrown in the middle of a family war. Can a modern witch find love with an old-fashioned mundane who refuses to settle for anything less than forever?

Happy families may be all alike, and every unhappy family may be unhappy in its own way, but there should be an exception for intrusive families, which are more alike in their unhappiness than the paraphrase from Tolstoy would lead one to expect.

Certainly Danica Waterhouse’s family of witches has plenty of intrusiveness to go around, between her cousin Clementine who is determined that both Danica and Clementine will remain single and unattached forever, her mother Minerva who married a mundane and lost her powers, and her beloved Gram who is determined that Danica will marry someone with an impeccable witch lineage and pass on the Waterhouse legacy.

Minerva wants her daughter to follow her heart. Gram doesn’t care about Danica’s heart as long as her ovaries are dedicated to making pure witch babies, while Danica just wants a chance to live her own life on her own terms. Something that seems impossible as long as she’s the chew toy in the family squabble between her laid back mother and her bulldozer grandmother.

A grandmother who is an expert at wielding guilt like a knife and isn’t either ashamed or afraid to use that knife and any other weapon that comes to hand in order to keep her granddaughter on what she perceives as the straight and narrow.

Danica lets herself be stuck in permanent peacemaker mode, caught between those opposing viewpoints, until she’s broken out of her paralysis by the smell of sinful cinnamon rolls wafting through her life.

Danica and her cousin Clem are the owners of Fix-It Witches repair shop, because that’s literally what they are and what they do. Their witch talent lies in coaxing machinery that is broken into a state of repair. And one of the ovens at Sugar Daddy’s bakery is in desperate need of repair.

Which leads the Sugar Daddy himself, Titus Wannaker, the baker-in-chief, to stop at Fix-It Witches to ask if they can come over and repair his recalcitrant oven before he starts losing business.

But when Titus opens the door at Fix-It Witches, Danica loses control of her magic, her blender sprays a pineapple smoothie everywhere, and Titus loses his heart to the sweet, snarky, sexy witch who looks like she bathed in pineapple chunks.

And the feeling is very, very mutual.

There’s only one hitch in Titus’ instantaneous plan to get as close to Danica as possible for as long as possible – at least once she gets the pineapple chunks out of the way.

Danica is a witch, Titus is a mundane, there’s a Statute of Secrecy that makes the one in the Potterverse look like a mildly worded suggestion – and there’s Danica’s Gram lurking around town, determined to keep Danica on the only path that Gram will EVER approve of.

A future that does not include delectable interludes with a mundane – not even the Cinnaman of Danica’s dreams. 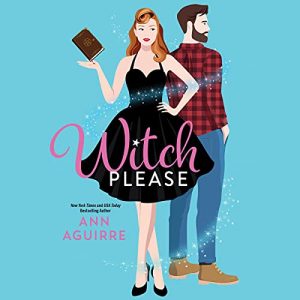 Escape Rating B-: I am of two minds on this book in so many ways!

First, foremost, and most important, the romance between Danica and Titus is lovely, sweet, sexy, delicious and every kind of wonderful. I loved them together so much and wanted Danica to find a solution to her family and witchy dilemmas so badly so that they could have a chance. The author did a great job of conveying that this was a once-in-a-lifetime kind of love and that they belonged together in spite of everything.

I stuck with the book because I wanted to see them get their HEA so much.

At the same time, at the literal halfway point I switched from the audio to the ebook in spite of how much I was enjoying the narrator because Danica’s intrusive family, her almost pathological need to keep everyone happy – except herself – combined with the need to keep witches and witchcraft secret on pain of death or at least an extreme memory wipe were downright painful and I wanted to get through them as quickly as possible. By judicious skimming if necessary.

Not that Titus’ family doesn’t have problems of its own, but the crap he was dealing with all made sense.

Danica, on the one hand, was being a doormat in the face of her family’s conflicting expectations and demands. On the other hand, her relationship with Titus, their ever-increasing chemistry and every time they managed to find a tiny slice of time together were utterly adorable. And on the third hand – hey, witchcraft, why not three hands (or more) in a pinch? – there was too much about this world’s version of witchcraft that wasn’t explained as well as it could have been.

Because there’s a terrific story of sisterhood and found family hidden within the dynamics of Danica’s coven. While a bit too much of the coven’s business in this opening entry in the series was focused on the way that Danica’s powers were spiking out of control because of her relationship with Titus that she didn’t feel free to actually have, there was still a lot there to unpack and revel in about the way that this group of multiple generations of women got together, supported each other both personally and professionally, gave each other space to vent and room to grow, and occasionally discussed books in between major magical workings. 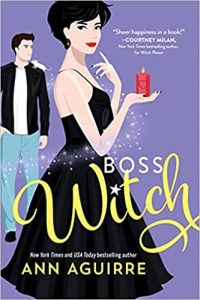 I was also fairly convinced early on that Gram was pretty much the Wicked Witch of the (Mid)West, so I wasn’t exactly surprised to discover that my conviction was close to the actual mark and not just my own feelings about just how toxic her manipulations really were. And I’ll admit that I really needed to see an epic takedown of Gram over this and did not get the catharsis I was looking for.

So there’s a thread in this story about Danica being forced to learn that her hero has feet of clay up to the knees and it felt like that reveal and its effects were minimized. It’s entirely possible that we’ll get to see the fallout of that situation in the next book in the series, Boss Witch, in April 2022. I need to make sure that Danica and her Cinnaman are still living their sweetly happy ever after.