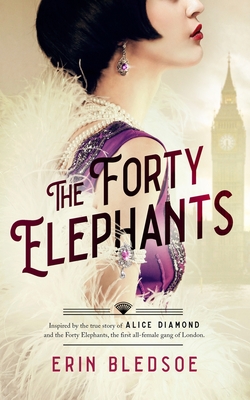 Inspired by the true story of Alice Diamond and the Forty Elephants, the first all-female gang of London.
London in the 1920s is no place for a woman with a mind of her own. Gang wars, violence, and an unforgiving world have left pickpocket Alice Diamond scrambling to survive in the Mint, the gritty neighborhood her family has run for generations. When her father goes to jail yet again and her scam artist brother finds himself in debt to the dangerous McDonald crime syndicate, Alice takes over. Fighting for power at every turn, she struggles to protect her father's territory and keep the people she loves safe from some of London's most dangerous criminals.
Recruited by the enigmatic Mary Carr, Alice boldly chooses to break her father's edict against gangs and become part of a group of notorious lady shoplifters, the Forty Elephants. Leaving the Mint behind, she and the other girls steal from the area's poshest department stores, and for the first time in her life, Alice Diamond tastes success. But it's not long before she wants more--no matter the cost. And when her past and present collide, there's no escaping the girl from the Mint.

This is a story about women and power and how three particular women chose to, or were forced to, wield their power in a man’s world that dictated a place for women that none of them were willing to confine themselves to.

There are three women at the heart of this story; Kate Meyrick, the Nightclub Queen, Mary Carr, Queen of the Forty Elephants, and Alice Diamond, the de facto crime boss of The Mint, a notorious working-class AND criminal-class section of London.

The Forty Elephants were real, as were Kate Meyrick, Mary Carr and Alice Diamond. Meyrick was a female nightclub owner at a time when “ladies” at least were not supposed to frequent nightclubs – let alone own them. But in the early 1920s when this book takes place, a lot of the old rules had been buried in poorly marked graves on the continent along with a generation of England’s young men.

As this story begins, Mary Carr is the current boss of the Forty Elephants, a notorious all-girl gang of shoplifters who were the darling of the tabloids, the bane of the police, and the plague of locusts that ravaged new department stores like Selfridge’s as well as the homes and persons of people with more money than the sense not to flaunt it with easily pocketable items in public.

But this is Alice Diamond’s story, while Meyrick and Carr are both her mirrors and the stepping stones she uses to reach a pinnacle of criminal success that women were not supposed to even aspire to, let alone succeed at reaching.

It’s not a pretty story – but it is a fascinating one. All the better for being steeped in history.

Escape Rating B+: What made this such an interesting story is the way that it is Alice Diamond’s coming-into-power story in a realm that we don’t often see women conquer and that we’re not really supposed to celebrate when anyone does.

What made Alice special, at least according to this fictionalized account, was that the power she grasped and wielded wasn’t done the way that women traditionally held that kind of power. That is at least part of the purpose of Meyrick and Carr in Alice’s story. Both of them chose, or got shoved into, or submitted to the kind of power that they wielded in organizations that were female dominated, specifically by them, but were ultimately controlled by men either overtly or covertly.

They looked dominant but that was an illusion. In reality, they still operated in a man’s world and kept a woman’s place in it.

Alice takes the reins, first of The Mint and eventually of the Forty Elephants, of power as simply power. She never accepts anything less than a true partnership – or an honest war – with any of the male-dominated gangs. She works with them but not for them and never in a subservient position.

Which also means she wields control like they do and does the same kind of dirty jobs they do. Up to and including murder.

So the idea of the Forty Elephants may seem lighthearted as well as light-fingered, but even this fictionalized version of it is anything but. Still, it’s a fascinating portrait of the gangster as a young woman coming into her own and bringing other women up with her. It’s dark and gritty and occasionally gruesome but very compelling – possibly because of all of the above – and I’m glad I read it. 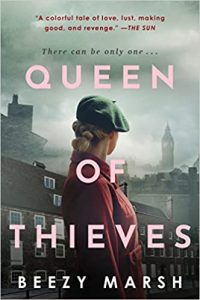 (Reading this has also sent me down lots of lovely internet rabbit holes, not just about the Forty Elephants but also about the TV series Peaky Blinders which I’m now extremely tempted to watch!)

Back to books – Alice Diamond is such an interesting character that this is not the only book about her on the horizon. Now that I’ve finished The Forty Elephants I’m very curious to see how Alice is portrayed in Queen of Thieves by Beezy Marsh, coming out in January.

One thought on “Review: The Forty Elephants by Erin Bledsoe”