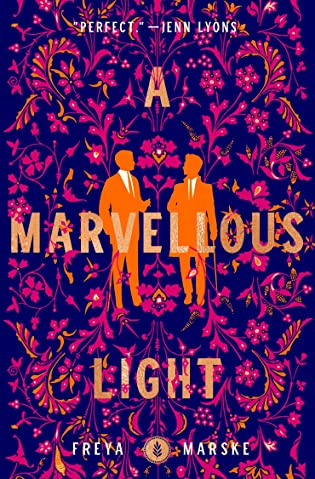 Robin Blyth has more than enough bother in his life. He's struggling to be a good older brother, a responsible employer, and the harried baronet of a seat gutted by his late parents' excesses. When an administrative mistake sees him named the civil service liaison to a hidden magical society, he discovers what's been operating beneath the unextraordinary reality he's always known.
Now Robin must contend with the beauty and danger of magic, an excruciating deadly curse, and the alarming visions of the future that come with it--not to mention Edwin Courcey, his cold and prickly counterpart in the magical bureaucracy, who clearly wishes Robin were anyone and anywhere else.
Robin's predecessor has disappeared, and the mystery of what happened to him reveals unsettling truths about the very oldest stories they've been told about the land they live on and what binds it. Thrown together and facing unexpected dangers, Robin and Edwin discover a plot that threatens every magician in the British Isles--and a secret that more than one person has already died to keep.

In many stories, magic serves as a brilliant light upon the world, a light that is often hidden from those who are unable to share in its wonders. In many of the worlds portrayed by those stories, that light is lit within some, or sometimes many, of the people who populate the world of the story.

But with the presence of light comes its absence – darkness. Humans, whether magical or not, already have more than enough of that within themselves. Magic, whether for good or for ill, is power. And as the cliché explains all too well, power corrupts and absolute power corrupts absolutely.

Thus, A Marvellous Light is a story about magic, and about the revealing of magic to someone who has none. But just as the light of magic is “unbusheled” for Robin Blyth, so too is the darkness that surrounds it – and him – cast into the darkest of shadows. Shadows that threaten to swallow him before he ever learns what is hidden within them.

But Robin has more experience with the darkness created by brilliant lights than anyone might ever suspect. And in the person of his reluctant guide, Edwin Courcey, he has a partner who has been battered by those shadows for far too long. Someone who might be willing to help Robin find his own light – and share it.

If they’re smart enough – well that’s Courcey’s department. If they’re brave enough – that’s Robin all over. And if they can find their way to the heart of the puzzle before it’s too late. For themselves. For their loved ones. For their country.

And for each other.

Escape Rating A-: A Marvellous Light is a story about power and privilege. Yes, it’s about the power of magic, but it’s also about the power of money, the power of knowledge, the power of social position and about all the privileges that power can buy, especially for those who are so steeped in its exercise that they can’t even see those with less power as people. Even when they are members of their own families.

It’s also a flamboyantly beautiful story, set in a world as complex and intricate as the Morris prints that Robin Blyth loves.

But it’s the “casual, unthinking malice” of nearly every person with magic that makes this book a frequently uncomfortable read, particularly in the early stages where it seems like all the jokes are on poor Robin and everyone else, including Edwin Courcey, is part of the circle laughing around him.

At least until the reader, along with Robin, figures out that Edwin’s cold, brusque manner is a defensive mechanism to cover up, well, pretty much everything that he feels about everything in his life, including, most especially, his casually, maliciously cruel family.

Because Edwin has been the butt of those exactly same painful “jokes” for his entire life, while Robin has only been suffering from them for a few days. And Robin has much, much better armor against them because the scars don’t run nearly so deep.

Someone has learned that objects of power in the magical world have resurfaced after centuries of quiescence. Forces are arrayed to procure those objects – no matter who or what stands in their way. Or how much collateral damage they do in the search. Starting with Edwin Courcey’s colleague and continuing through Robin, the civil servant assigned through malice – again malice – to take that man’s place.

Drawn to each other by happenstance, by circumstance, by affinity and by shared pain as well as shared inclinations, Edwin and Robin embark on a quest to thwart their opposition, never realizing that it will lead them to the highest circles of power – and back into the rotten heart of Edwin’s family.

But they’ll have each other – if they can just get past their own fears and their individual heartbreaks, and accept a bit of help from some surprising people along the way. It can be enough – if they just let it.

One final thing, something that took me until the next morning to figure out, and now I feel like I just got unbusheled. Or hit with a clue-by-four. Throughout the story, they’re all aware that something huge and terrible is coming, and much of what happens is due to too many people taking desperate and wrong-headed methods to stop that thing or overpower it. The “thing” that is coming, the doom that is hanging over all their heads, is World War I.

Which may not happen for quite a while during the course of this series, The Last Binding, of which A Marvellous Light is merely the first marvellous part. I searched high and low for a title and publication for the next book in this series, but it has not been “unbusheled”. At least not yet. But I live in hope that it will be soon.

Reviewer’s Note: I listened to the first third of this one, until it got past the really uncomfortable, tooth-gritting bits. Not that Edwin’s family got any better – actually they got worse – but once it heads towards Edwin and Robin against the world the pace picked up, the magic got even more fascinating and at least some of the awfulness became part of the much larger point. And I was hooked.