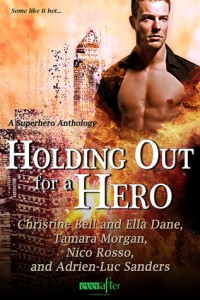 After five years in training, it’s finally time for Scarlett Fever and her fellow superheroes to leave the United Superhero Academy and test their powers out in the real world. There’s only one problem. She’s been assigned to partner with arrogant, by the book, and irritatingly hot, Blade of Justice.

Blade’s whole life has gone according to plan, and he’s more than ready to move on to the big time, protecting a metropolis of his own. But his perfectly ordered life is derailed when he’s teamed up with the fiery maverick, Scarlett Fever.

Sparks fly the moment they arrive in Plunketville, Oklahoma, as they each set out to force the other to request a transfer. They soon discover there’s more going on in this single stop-sign town than blowing up mailboxes and cow tipping. If Scarlett can get Blade to listen to his gut, and he can teach her to use her head, they just might have a fighting chance.

Vince might be hard as steel, but he’s not invincible. Not when iron touches him, especially in the hands of an evil minion. Not when Kara ran away after a whirlwind affair, just when he thought he might be falling in love. And definitely not when she returns, looking for his help.

The archvillain TechHead is coming for Kara and her superhero teammates, and he’s determined to use their combined power to create the ultimate weapon. But Kara can’t fight him alone. She needs Vince’s brutal skill, though being with him means she risks losing her beloved secret identity, leaving her nowhere else to hide.

When TechHead makes a play to capture Kara, Vince has more to lose than just his heart. But he will do anything for the woman he loves, even if it means putting his heart on the line again.

Playing With Fire, by Tamara Morgan

Fiona Nelson has always been one hot ticket—even before she took the conversion serum that gave her superhu¬man abilities. Fiona’s powers come at a price: lack of human contact, or she won’t be the only thing burning. When she loses control of her emotions, her fire powers run rampant… and she’s hurt enough people already. Including herself.

But when the man behind her conversion returns to black¬mail her into helping him gain power, the only person she can turn to is Ian Jones, the man who broke her teenage heart. The man determined to expose the criminal known as Fireball, whose explosive escapades are just a little too close to Fiona’s M.O.
Ian is convinced Fiona’s dangerous, convinced she’s Fire¬ball, and convinced he’ll damn himself if he doesn’t resist a heat that’s always drawn him to Fiona like a moth to a flame—but Ian has his own secrets.

And he’ll learn far too soon what happens when you play with fire.

From the Ashes, by Adrien-Luc Sanders

Sociopath. Killer. Deviant. Monster, devoid of morals, incapable of human emotion. The villain known as Spark has been called that and more, and as a super-powered aberrant has masterminded countless crimes to build his father’s inhuman empire.

Yet to professor Sean Archer, this fearsome creature is only Tobias Rutherford–antisocial graduate researcher, quiet underachiever, and a fascinating puzzle Sean is determined to solve.

One kiss leads to an entanglement that challenges everything Tobias knows about himself, aberrants, and his own capacity to love. But when his father orders him to assassinate a senator, one misstep unravels a knot of political intrigue that places the fate of humans and aberrants alike in Tobias’s hands. As danger mounts and bodies pile deeper, will Tobias succumb to his dark nature and sacrifice Sean–or will he defy his father and rise from the ashes to become a hero in a world of villains?

I still hear the song. Whenever I read that phrase, “holding out for a hero”, I still hear Bonnie Tyler’s version, her slightly raspy delivery, punctuated by drumbeats…or gunfire.

But the words still resonate. In the song, it wasn’t merely a hero. Oh, no, not just a hero.

She wanted a “street-wise Hercules”, even a superman to sweep her off her feet. A pretty tall order.

A hell of a song.

Nico Rosso’s Ironheart is the love story of two superheroes, Kara the SnapDragon and Vince the Anvil. But that song, “Holding out for a Hero” was tailor-made for Kara. She may be a superhero herself, but Vince is the hero that she’s holding out for.

She ran from Vince when their affair got to be too much for her to handle. Kara wasn’t born a superhero, and she’s still adjusting. She and the three other WildFlowers were chosen by a cosmic sensei to become the WildFlowers. It’s only been a year. And well, her sensei is very zen. He expects the WildFlowers to embrace their sisterhood and one heck of a lot of zen calm. It’s the way of his people. But it’s not the messy human way.

Vince is very messy and very human. He was born different, and he’s embraced what he is. He’s also pretty badass for someone who is a superhero and not a supervillain. His team, Omni Force, tended to blame him for any collateral damage that happened when they took out a bunch of villains.

Kara digs him out in the middle of a fight with a bunch of GearHead punks. Vince thinks she’s finally come back to him. Well, she has, but…she found him because she needs his help. Kara would have come back to him eventually, but her sister WildFlowers have been captured by the archvillain TechHead, and she needs Vince’s help now.

She gets caught up in just plain needing Vince, first. Before she explains why she came to find him. He feels betrayed. Of course he does. Then she gets captured. And he finally gets his head straight about what parts of their encounter really matter. Not to mention that little problem of rescue.

Kara gets her hero. Kara also gets to become the hero she was meant to be. Vince becomes a better hero. And TechHead gets disassembled back into little gearbits.

I love a good superhero stomp! Escape Rating A for the sheer exhiliarating fun of it! 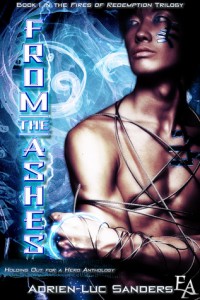 From the Ashes by Adrien-Luc Sanders

Tobias Rutherford is a graduate student. He seems to have slightly less of a social life than most grad students working on a thesis. And there’s a reason for that–Tobias is leading a double life. Grad student by day, aberrant hitman by night.

What’s an aberrant? In this futuristic world, ever since the advent of genetic modification of human fetuses, some children are born with special powers. They are called aberrants. Tobias can manipulate electric currents. Your computer, your cell phone…your heart.

His father rules and aberrant dictatorship in what used to be Thailand. He plans for Tobias to take his place someday. If Tobias survives his increasingly dangerous apprenticeship. Aberrancy is a cut-throat existance.

Power corrupts, and absolute power still corrupts absolutely. Especially when it operates from the shadows.

Tobias still feels things. It’s only when he puts on his “mask” as Spark, his aberrant alter-ego, that he is able to set aside his emotions and perform the tasks his father sets for him.

Until he is “distracted” by his ethics professor, Sean. Tobias doesn’t even believe in ethics.

This story is told entirely in the first-person, from Tobias/Spark’s point of view. We read his internal struggle with the tasks appointed to him, which are, honestly, murder and destruction. At the same time, we see him fight his growing attraction to Sean, and then fall in love without knowing what is happening, because he has no experience to compare it to.

Tobias isn’t likeable, but he is fascinating. He’s been told one thing about what he should be, but it doesn’t fit, and yet he has nothing else to go by. And he wants to survive.

This story is compelling. I wanted to know more about how the whole society came to be, but of course, Tobias doesn’t know, or care. He’s just trying to get on with his life. This one keeps you thinking about it after the last page.

Escape Rating A-. The great thing about the first-person perspective of this story is that it helps the reader sympathize with Tobias, who would otherwise be a completely unsympathetic villain. The problem with the first-person perspective is that we only know what Tobias says to himself or to someone around him. It cuts off some of the world-building necessary for me to really get into a futuristic story. YMMV.

I didn’t stop with just two heroes. These stories were way too much fun. If want more heroes, go to Book Lovers Inc. on Friday, February 22 for the rest of the story.

2 thoughts on “Review: Holding Out for a Hero”