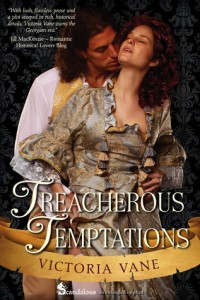 A reluctant heiress resigned to her fate… Mary Elizabeth Edwardes has one of the largest fortune’s in England, but has no desire to leave her quiet country existence… and even less to acquire a husband she cannot choose for herself.

A dissolute nobleman bent on retribution… Trapped in a duplicitous existence since scandal destroyed his fortune and family name, Lord Hadley Blanchard has spent the better part of a decade posing as a disaffected exile while spying and seducing in the service of the English Crown.

A dangerous game of seduction, and intrigue… When summoned from abroad by a former lover, Lord Hadley perceives an opportunity for vengeance at last. By employing the full measure of his seductive charm, he woos the ward of the man who destroyed his life, little knowing that winning Mary’s fortune will mean risking his own treacherous heart.

Some of it even happened.

Victoria Vane is an expert at weaving the soiled threads of actual Georgian-era events into a tapestry that proves yet again that foul deeds can wear a fair face. Behind the glittering masks of the aristocracy lurked the corruption that the later Victorian era’s compulsive prudishness was a reaction against.

The Georgian era was a revel. 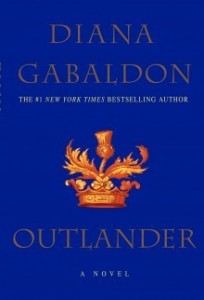 Two of the events that lay behind the story of Treacherous Temptations were real, historic events. After the Hanoverian kings, in the person of George I, took the throne of Britain, there were a series of rebellions in favor of James Stuart, and later his son Charles. History calls his son “Bonnie Prince Charlie”. The rebellions are known as the “Jacobite Rebellions” and they cost Scotland dearly. The breaking of the clan system in the Highlands was one of the results. (If you want to read more about the Jacobite Risings, invest some time in Diana Gabaldon’s Outlander series. The first three books cover it in glorious detail.)

The Scots did not want “German Georgie” on the throne. They paid in blood. Spying on them paid in cash.

The government-backed Ponzi scheme was also historic fact. Bernie Madoff was small time compared to the South Sea Bubble, because the South Sea Bubble started off as a government investment. It was supposed to reduce the cost of the national debt by investing in trade with South America. There was just one problem–at that point in history, all South American Trade was controlled by Spain, and Britain was at war with Spain. There was also a pesky problem with insider trading.  (Some things never change)

As our story begins, Hadley Blanchard is summoned home after nearly ten years spying on the Jacobite court in exile. This was a dangerous game for him. If he was caught by the Jacobites, they would have killed him. If he was caught in England delivering messages to either his paymaster or to any of the exiled court’s contacts, he had his choice of being executed for treason or killed on sight.

His paymaster would not have protected him, and he knew it. He was living by his wits, and time was probably running out.

About that summons home, it comes from his stepmother. Funny thing about that, she’s also his lover. Or she was. That both is and isn’t as bad as it sounds. They are about the same age. But, it was the sight of the two of them together that caused his father to kill himself instead of her.

And his father’s death was terribly, terribly convenient for the other officers of the South Sea Company. Dead men make very handy scapegoats. Hadley was all of nineteen at the time. He lost his home, his estate, his title, and his income. The government gave him a small stipend and sent him on his way. Disgraced by proxy.

All he has to do is seduce her and marry her. He doesn’t even have to like her. It would be so much easier for him if he didn’t like her. If he didn’t care.

But Mary Edwardes seems to actually like him, not just want him. He’s practiced at making women want him. Having someone like him, that’s different. It’s more than novel. It makes him feel like there might be a future, and not just revenge.

Except that he’s not remotely worthy of a woman like Mary. And he still has to make her see that he’s better than any of the alternatives that her guardian will sell her to, even after she finds out the awful truth about him.

Escape Rating B+: Treacherous Temptations has a number of elements of the “perils of Pauline” type of story. Mary Edwardes does seem beyond innocent, even naive. She is nineteen, not sixteen. It’s not that she doesn’t know about sex, it’s that she doesn’t know about people. Sir Richard, her guardian, is selling her to the highest bidder. Lady Barbara is not her friend. Human nature is the same all over. Even in her village there would have been people who were rotten, and nineteen is well out of the schoolroom.

But it’s Hadley’s journey that fascinates. He grows from being a besotted boy in the prologue to a man who has had enough and needs to find a way out. His redemption is the story that we’re following. He needs to throw off his last tie to Barbara, his dependence on Sir Richard’s money, and finally stand up for himself by saving Mary. Hadley pulling himself out of the gutter is the story.

And it’s a damned good one.

One thought on “Review: Treacherous Temptations by Victoria Vane + Giveaway”