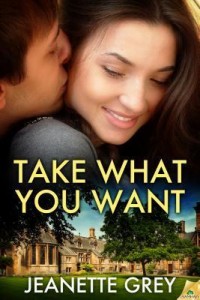 She needs an escape…and he’s exactly what she had in mind.

College senior Ellen Price spends every spare minute studying to get into medical school. Until spring break yawns before her, as empty as her wallet.

With no money to hit the beach, she fills her empty to-do list with a plan: for just one week, she will become the kind of take-no-prisoners woman she secretly wishes to be, starting with the hot guy at the bar. It’s a no-risk situation: at the end of break, he’ll head back to his campus, and she’ll go back to hers. No muss, no fuss.

At first, Josh Markley isn’t sure what to think when the quiet, intense beauty from his pre-med classes approaches him for a night of casual sex. Even more mystifying, she doesn’t seem to return his recognition. But if she wants to play “strangers in a bar”, he’s game.

Their passionate night is a welcome respite from life’s stress, but afterward, Josh realizes he wants more—from himself, from life, from Ellen. Except she still thinks he’s a one-off she’ll never see again. Confessing the truth now—before she figures it out on her own—could shatter the fragile beginnings of just what the doctor ordered. A forever love.

Warning: Contains mistaken identities, a sometimes-glasses-wearing hottie, deep questions about figuring out what you want from life, and a red-hot college romance.

Can you change who you are? Can you pretend to be someone else?

Take What You Want by Jeanette Grey is sex-into-love story about the power of positive thinking, or maybe that’s the power of turning lemons into very wicked lemonade.

She’s envious and pretty bummed when all her much-better-heeled friends (literally as well as figuratively) run off for senior year Spring Break to the Bahamas. Ellen can’t afford the trip.

So instead of moping around her apartment, she hatches a very cool plan. She takes Spring Break from herself. For one week, instead of being shy, retiring, studious Ellen in her fade-into-the-background clothes, she’ll be glamorous, sexy, take-charge Ellen in a new wardrobe. Bought on sale, of course.

New Ellen won’t be a student, she’ll just be a waitress. New Ellen goes to a bar, empty of students, and picks up the hottest guy in the place.

She doesn’t recognize Josh Markley without his trademark glasses. But Josh recognizes her. He’s been fascinated with Ellen since the first time he saw her, freshman year.

He thinks she’s playing a game. and he doesn’t care. He’s just fine with the idea of casual sex with the hottest girl he’s ever seen.

Until the next morning, when he wakes up and realizes that he wants more than just sex. And he can’t figure out how to stop the game they’re playing. Or whether Ellen wants to stop playing and reach for something real.

Escape Rating A-: This story just works! I could see Ellen just deciding that she wasn’t going to take it any more, and try to be different from her usual self. Her self-talk as she experimented made her experience much more plausible. It was hard for her but she kept trying, even as she got in deeper and deeper with Josh.

It also made the story richer seeing things from Josh’s point of view. At first it was just sex, but then he figured out that he wanted more and started to date Ellen instead of just going back to her place. It was difficult for him to switch from casual sex to a real relationship. That’s not an easy transition in real life.

These two had fantastic chemistry from the very first page! I expected my iPad to start sending out smoke signals, which would be very bad. But Ellen and Josh were on fire for each other, and stayed that way throughout the book. They were lucky, and Ms. Grey’s handling of their story was so well done, that instead of burning out, they lit something that could last.

2 thoughts on “Review: Take What You Want by Jeanette Grey”