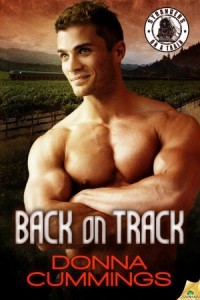 What’s a little lie between strangers?

A Strangers on a Train Story

Allie Whittaker is in a dating slump, too busy getting her fledgling marketing company off the ground to have a personal life. All that could change, though, if she can get baseball superstar Matt Kearns on the cover of a charity calendar. Except Matt won’t even talk to her.

Matt is in a slump, worried his career might be over. A Napa Valley wine tour isn’t enough to take his mind off his troubles–until sexy, funny Allie plops into the adjacent seat and tells him three things about herself. One of them, she says, is a lie.

Matt can’t resist playing along, and soon the afternoon getaway becomes an interlude with lies, truths, and desire flowing as fast as the wine. Then Allie lets slip one truth too many…and they both realize they’re playing for keeps.

Warning: A handsome hunk, a determined lady and a few glasses of wine. Throw in a little on-the-run action, and what more do you need to while away an afternoon?

What do a dating slump and a pitching slump have in common? Allie Whitaker hasn’t had a date in too long to think about, and Matt Kearns is coming off an injury and looking at the end of his professional baseball career. They shouldn’t have much to talk about.

The one thing that there is a LOT of on a Napa Valley wine tour, especially a train tour where none of the guests have to drive is, well, Napa Valley wine! Allie’s friends dare her to chat up a stranger on the train.

She’s so nervous that instead of using the line about telling him “three things about herself, and one of them is a lie”, she says she’s telling him three lies. She lies by omission, she pretends not to recognize him.

Until a fan reveals the unavoidable truth, and Allie has to confess that she’s known all along. Then Matt believes that she’s just like everyone else in his life–out for what she can get from him. In Allie’s case, a photo shoot for her charity calendar.

How much misery will it take for Matt to realize that he was wrong?

Escape Rating C+: This short story was cute, frothy and fun. Matt and Allie have terrific chemistry together from the very beginning, and I enjoyed their banter. A lot. Since they both knew from the beginning that they were playing a game, the story would have been better if they had skipped the misunderstandammit near the end.