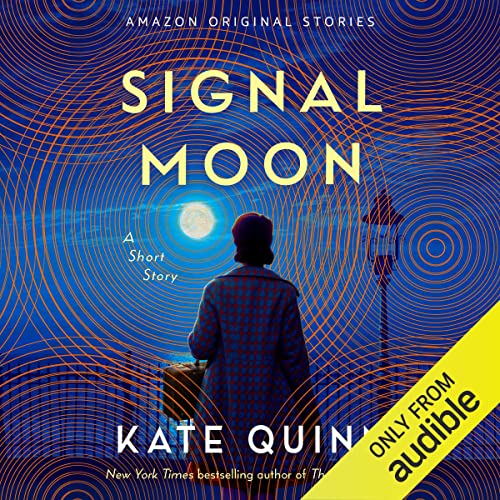 From the New York Times bestselling author of The Diamond Eye comes a riveting short story about an impossible connection across two centuries that could make the difference between peace or war.

Yorkshire, 1943. Lily Baines, a bright young debutante increasingly ground down by an endless war, has traded in her white gloves for a set of headphones. It’s her job to intercept enemy naval communications and send them to Bletchley Park for decryption.

One night, she picks up a transmission that isn’t code at all—it’s a cry for help.

An American ship is taking heavy fire in the North Atlantic—but no one else has reported an attack, and the information relayed by the young US officer, Matt Jackson, seems all wrong. The contact that Lily has made on the other end of the radio channel says it’s…2023.

Across an eighty-year gap, Lily and Matt must find a way to help each other: Matt to convince her that the war she’s fighting can still be won, and Lily to help him stave off the war to come. As their connection grows stronger, they both know there’s no telling when time will run out on their inexplicable link.

This story was so beautiful it just about broke me. It was gorgeous and glorious and heartbreaking all at the same time, and I was in tears at the end.

I want to say this is a timeslip story but that isn’t quite right. It’s more of a time-merging story, or a bit of technological SF sleight of hand story. It’s best to just say that it works. It all works marvelously, and let the how and why of it remain a bit nebulous.

After all, our two principals don’t completely understand the why of it themselves. They just know that it happened. And that it saved them both.

Lily Baines is a signal tech in Yorkshire in 1943, spending her days and nights with a Bakelite headset wrapped around her “bat-like” ears, listening for German signals. She’s a Petty Officer in the WRENS (Women’s Royal Naval Service), doing her bit for in a war that she’s entirely too afraid is being lost.

Late one shift, she picks up a signal from an American ship, broadcast in English, in the “clear”, detailing an attack on the ship by “Vampires”. An attack that results in the ship sinking with all hands after 42 minutes of harrowing transmission by the U.S. Naval signal tech, ST Matt Jackson, who gives the date as 2023.

While her superiors are certain that Lily has just been working too many days in a row without a break, Lily feels like she owes it to her fellow signal tech, the man she just heard narrate his own death, to try to help him. So she sends him a letter, a 1943-era radio, extra batteries, and a list of frequencies that she promises to listen on at a specific time every day.

There’s no science fiction involved in her package to the future. Her uncle is a solicitor and she contracts with his office to deliver the package to a certain room in a certain hotel in York on the day Matt said he checked in. Law offices do this all the time, just not necessarily for quite 80 years.

When Matt gets the radio, he’s sure it’s a prank, but he dials the frequency anyway. Even when Lily starts talking, he STILL thinks it’s a prank – at least until that night, when an event that she predicted comes true.

They have less than 24 hours to analyze the transmission that Matt hasn’t sent yet, in the hopes of figuring out what is about to go wrong so that he can prevent it. Or save his ship. Whatever it takes to prevent yet another war.

What they get is more than either of them ever bargained for. It’s enough – and it’s not nearly enough at all.

Escape Rating A++: Signal Moon is short and absolutely perfect in its length. It represents a very brief moment in time and needed to reflect that brevity. Also, it’s just so damn bittersweet – and appropriate in that bitter sweetness, that more would be just too much to take.

But because of that short length, I was able to sit down with the audiobook and finish in one utterly absorbing and in the end completely heartbreaking listen. (If you have Amazon Prime you can get both the ebook and the audio as part of your Prime membership, and it’s so worth it to listen to the audio if you have a mere 82 minutes to occupy your hands while your mind wanders back to 1943 – and forward to OMG next year.)

The strength of this story is in the characters. The author sketches us a complete picture of Lily and her wartime service with just a bit of description and a whole lot of Lily’s internal monologue as she goes through her day pretending that everything is going to be alright even though she’s scared right down to her not-nearly-warm-enough fingertips that all is already lost. 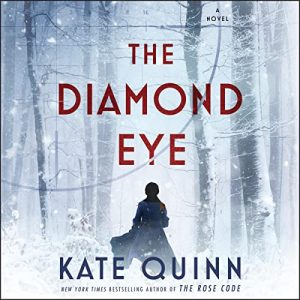 While Matt’s more frank and frequently profane dialog, along with the desperation of his own internal monologue, gives the reader or listener a clear portrait of who he is and what drove him to become the person – and the officer – that he is on the brink of what could be – briefly – his very own war.

In the audiobook, the two characters are brilliantly voiced by their own narrators, Saskia Maarleveld for Lily and Andrew Gibson for Matt and they embody their characters beautifully. The audio would not have worked half so well with a single narrator. (Saskia Maarleveld is also the narrator for several of the author’s novels, including this year’s The Diamond Eye, which just moved up the towering TBR pile as a result.)

The ending of this story is inevitable. There’s just no other way this one works. But it’s easy to get so involved in their story that you just want it to have a different ending anyway. And that’s what broke me in the end. I knew what the end would be, but this was just one of those times where I really wanted a deus ex machina to step in and make that difference happen – even knowing how much I usually hate those kinds of endings. But it wasn’t, and it shouldn’t have been, meant to be.

Kate Quinn and Amazon Publishing are giving away a $50 Amazon Gift Card to one very lucky entrant on this tour!
a Rafflecopter giveaway