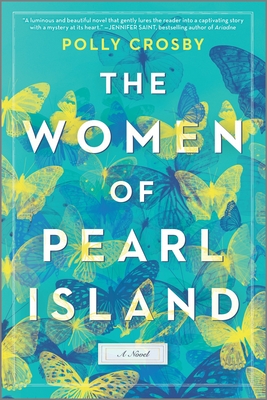 "A luminous and beautiful novel that gently lures the reader into a captivating story with a mystery at its heart." – Jennifer Saint, bestselling author of Ariadne
Set on a secluded island off the British coast, The Women of Pearl Island is a moving and evocative story of family secrets, natural wonders and a mystery spanning decades.
When Tartelin answers an ad for a personal assistant, she doesn't know what to expect from her new employer, Marianne, an eccentric elderly woman. Marianne lives on a remote island that her family has owned for generations, and for decades her only companions have been butterflies and tightly held memories of her family.
But there are some memories Marianne would rather forget, such as when the island was commandeered by the British government during WWII. Now, if Marianne can trust Tartelin with her family's story, she might finally be able to face the long-buried secrets of her past that have kept her isolated for far too long.

The setting for The Women of Pearl Island is absolutely beautiful, totally fascinating, and stunning in its strange and hidden history. The secrets that the island keeps are explosive, but not nearly as explosive as those kept by Marianne Stourbridge as the story begins.

The story is set in two timelines, the primary one in 2018, as the elderly Miss Stourbridge, the owner of the crumbling island of Dohhalund hires the grieving, escaping Tartelin Brown to serve as her personal assistant, general factotum, and all around helper and housemate.

As Tartelin explores the island, both on behalf of her employer and as part of her own increasing fascination with the mysterious locale, the story slips between Tartelin and Marianne’s somewhat fractious present to Marianne’s past growing up on the island that has been passed down through her mother’s family for generations. The island that Marianne Stourbridge now owns – at least what is left of it.

There are secrets buried in Marianne’s past, lost offshore on the parts of the island that have fallen into the sea in the years since 1955. The year that all the residents of Dohhalund were evacuated from their homes by order of the British military. They claimed to be testing explosives and that it would be too dangerous for the civilian population to remain.

Not that Marianne Stourbridge ever listened to what people in authority were telling her. Not now and certainly not then.

Escape Rating B: The most compelling character in this timeslip story is Dohhalund itself, a fictitious island in the North Sea within sight of both the United Kingdom to whom it belongs and the Netherlands from which it gets much of its language – at least as related to food – and its customs.

(Dohhalund is fictitious, but its geography and ecology are based on the real Orford Ness.)

Something obviously happened in 1955 on the island, a catastrophic event that Marianne Stourbridge has returned to the island to prove. Based on her previous research, and on her requests to Tartelin, it is clear to the reader if not to Tartelin that what Marianne is searching for proof of is a secret nuclear test. The evidence is everywhere among the wildlife of the island.

That the civilian population was evicted in 1955 and the island remained interdicted under military reserve for more than 50 years is a bit of a clue.

Because the most compelling character in the story is the island itself, The Women of Pearl Island reads as more than a bit lit-ficcy. It seems like not a lot is happening, the story isn’t moving all that quickly, and not many of the characters are happy about much of anything. But it still sucks the reader in like the tide that surrounds the island.

The part of the story that Tartelin is telling in 2018 feels like the stronger – or at least the more interesting – part of the book. Tartelin is still grieving the recent death of her mother, and she’s come to the island, to this strange, ambiguous job with this secretive and cantankerous old woman in order to get away from her grief and her memories – only to find herself dropped into the mystery of Marianne’s.

But Marianne’s story of the pivotal years of her childhood is told from her perspective in 1928. Not her perspective ON 1928, but her perspective IN 1928. She was 15 at the time, cosseted, protected and privileged, and she is immature, selfish and self-absorbed. Not that we all aren’t at least some of that at 15 – and even later. But it does not make her a remotely likeable character.

Tartelin, on the other hand, as frozen within herself as she arrives, is much more sympathetic. Her journey is one of reaching out and getting past, and it’s slow and sometimes hesitant, but she is getting there and it makes her the more dynamic of the two women.

But not quite as dynamic as the island itself, and the strange, sad but ultimately magical tale of it that she discovers as part of her own journey.