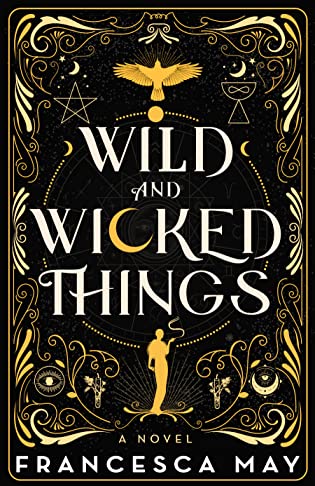 In the aftermath of World War I, a naive woman is swept into a glittering world filled with dark magic, romance, and murder in this lush and decadent debut.
On Crow Island, people whisper, real magic lurks just below the surface.
Neither real magic nor faux magic interests Annie Mason. Not after it stole her future. She’s only on the island to settle her late father’s estate and, hopefully, reconnect with her long-absent best friend, Beatrice, who fled their dreary lives for a more glamorous one.
Yet Crow Island is brimming with temptation, and the biggest one may be her enigmatic new neighbor.
Mysterious and alluring, Emmeline Delacroix is a figure shadowed by rumors of witchcraft. And when Annie witnesses a confrontation between Bea and Emmeline at one of the island's extravagant parties, she is drawn into a glittering, haunted world. A world where the boundaries of wickedness are tested, and the cost of illicit magic might be death.

The wild and wicked things of Wild and Wicked Things weren’t quite like anything I was expecting.

That may be because both “wild” and “wicked” are in the eyes of the beholder. And there seems to be plenty of both to behold on Crow Island, somewhere mythical and magical just off the coast of England.

Part of the fascination for me in this story was the setup. This is a post-World War I story, but the variation of the Great War that this story is post of isn’t quite the one we know. Because in this version of history, the gas that killed so many in the trenches wasn’t mustard gas.

It was magic. A magic that transformed the soldiers it touched into supersoldiers with no conscience, no morals, no scruples and no fear of death. It’s only hinted at, but it seems as if it was worse than that. It certainly left behind a version of “shell shock” or PTSD that gave the survivors even more regrets and worse nightmares than they suffered in our real history. Which is definitely saying something.

But the war is over. Politically, the powers-that-be that embraced witchcraft when they needed it to prosecute the terrible war are now backing away. Magic has fallen from favor – and from legality – and faces a Prohibition that will probably be just as effective as the real Prohibition was in U.S. history. Meaning not at all.

Still, the “Lost Generation” has even more they want to forget about than in real history. And one of the places they come to do that forgetting – at least among the rich and glittering – is Crow Island, where magic has seeped into the blood and bones of the place and its people.

Annie has come to Crow Island to pack up the estate of a man she never knew. Her absent father. She’s been warned all her life against magic and has no plans to get caught up in the mystery and glamour of the island. But as that old saying goes, the best laid plans of mice and men (and women) often go astray.

Especially as her best friend, Bea, ran away to Crow Island and married there. Annie feels compelled to find out what happened to the girl she grew up with. And the house that is just down the beach from her rented cottages shines so brightly in the night that she can’t resist exploring, no matter how many times she’s already been warned to stay away from magic in general, and from the residents of Cross House in particular.

Because they practice magic. Also sin, debauchery and perhaps a bit of drug dealing along with the fortune telling. But definitely magic – which is to be avoided at all costs.

But for once in her life as a timid little mouse, Annie doesn’t listen to all those cautioning voices. She finds herself caught in Emmeline Delacroix’ glamorous and glittering web. Only for Emmeline to discover that she has landed a much bigger fish than she expected, and that naïve, innocent Annie has caught her as well.

Or the magic has caught them both.

Escape Rating A-: The lesson of Wild and Wicked Things is to be very, very careful what you wish for, because you might get it at a cost that is not fully revealed until it is much, much too late. Along with a reminder that some gifts most certainly do come at way too high a price.

Initially, the person who got what they wished for was Annie’s friend Bea. But Bea has refused to pay the price for her wish, is refusing to acknowledge that it was her wish in the first place, and seems to be perfectly willing to let Emmeline Delacroix pay the price for it – even if that price is Emmeline’s own life.

Then again, one of the things we learn over the course of the story is that Bea is a user and a bitch to pretty much everyone. As we learn more about Annie and Bea’s shared girlhood, and Bea’s involvement with Emmeline and Cross House, we lose pretty much any sympathy for her and end up wondering why Annie put up with her for so long or why Emmeline didn’t see right through her.

But Bea is just the catalyst for everything that happens and that she refuses to accept any responsibility for. The story is Annie’s. It’s Annie’s story of feeling the fear and doing it anyway. Of coming into her own and admitting who she really is.

As Annie gets herself involved in all the things she’s not supposed to be involved in, like magic, witchcraft, murder, raising the dead and falling in love with Emmeline, she breaks out of the straightjacket her life has been contained in. It is, very much on the one hand, the making of her.

And on the other, thinking that raising the dead is a good idea that will solve all the problems they are all already in feels like seriously the wrong way to go about things. As the situation proves.

Considering the period in which this is set, it has a surprisingly gothic feel to it. Cross House has a mind of its own, and it’s a brooding one filled with darkness and secrets. The story also reminds me a lot of Amanda Quick’s Burning Cove series (start with The Girl Who Knew Too Much), with the way that the paranormal has been turned so completely dark.

However, following along with Annie as she figures out all of the above may not exactly be “right” (for select definitions thereof) but it is absolutely riveting from beginning to end.

2 thoughts on “Review: Wild and Wicked Things by Francesca May”