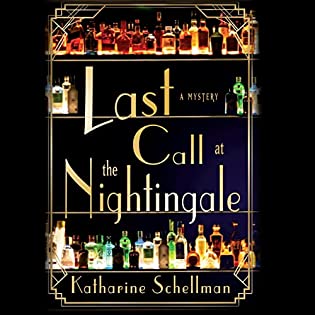 * Duration: 09:14:29 *
First in a captivating Jazz age mystery series from author Katharine Schellman, 'LAST CALL AT THE NIGHTINGALE' beckons listeners into a darkly glamorous speakeasy where music, liquor, and secrets flow.
New York, 1924. Vivian Kelly's days are filled with drudgery, from the tenement lodging she shares with her sister to the dress shop where she sews for hours every day. But at night, she escapes to The Nightingale, an underground dance hall where illegal liquor flows and the band plays the Charleston with reckless excitement.
With a bartender willing to slip her a free glass of champagne and friends who know the owner, Vivian can lose herself in the music. No one asks where she came from or how much money she has. No one bats an eye if she flirts with men or women as long as she can keep up on the dance floor. At The Nightingale, Vivian forgets the dangers of Prohibition-era New York and finds a place that feels like home. But then she discovers a body behind the club, and those dangers come knocking. Caught in a police raid at the Nightingale, Vivian discovers that the dead man wasn't the nameless bootlegger he first appeared.
With too many people assuming she knows more about the crime than she does, Vivian finds herself caught between the dangers of the New York's underground and the world of the city's wealthy and careless, where money can hide any sin and the lives of the poor are considered disposable...including Vivian's own.
©2022 Katharine Schellman (P)2022 Dreamscape Media. LLC

Prohibition was a noble concept, the execution of which was considerably less than noble. But as a setting for historical fiction, Prohibition and the Jazz Age that it spawned sparkles every bit as much as the spangled dresses that the “Flappers” of the period wore when they went dancing. At the speakeasies where liquor was bought from illegal bootleggers, ignored by cops on the take, and drunk by everyone who came to forget their troubles for a night of drinking and dancing.

Drinking can be a social lubricant even when it’s legal. Illegal booze drunk in barely hidden illegal establishments didn’t just break down individual’s inhibitions, it broke the social inhibitions between races, classes and identities.

Which is why Vivian Kelly dances at the Nightingale every night that she can, in spite of her older sister’s fear and disapproval. By day, Vivian lives in a constrained world. She’s Irish, she’s an orphan, she’s poor and she has a job that barely buys the necessities and has no prospects whatsoever. She and her sister seem doomed to be spinster seamstresses under the thumb of their overbearing, disapproving, autocratic boss until they step over a line or their eyesight gives out. They’re barely scraping by with little hope for better.

So Vivian dances as much as she can. She may not be able to dance away her problems, but she can certainly set them aside for a while when the drinks are flowing and someone is always looking for a dance partner.

Vivian also comes to the Nightingale because it’s where her best friend, Bea Henry, works as a dancer. Vivian may be white, but she’s also poor Irish. Bea is black, but in the poorer quarters of New York City where they live only a block apart, the Nightingale is a place where no one cares that they’re not supposed to be lifelong friends, just as no one bats an eye that the bartender is Chinese and the club’s owner is a woman who clearly prefers other women.

The Nightingale is a place where anyone can belong and everyone can be themselves – a place where people can put down whatever mask the outside world forces them to wear.

The night that Vivian and Bea find a dead body in an alley behind the club all of that is threatened. The police hush up the murder, but the dead man was high society and someone is determined to make the club and its owner, Honor Huxley, pay dearly for the privilege of staying open and keeping the secret.

Vivian is in it up to her neck. She can’t get the scene out of her head, and she can’t help but gnaw at the few available threads of the mystery. When the club is raided, and Vivian finds herself owing Honor for her bail money, the only way she can pay the teasing, tantalizing woman back is to do a little bit of snooping. Vivian can’t admit to herself that she wants to please Honor, but she also wants to pay back what she owes and more importantly, she doesn’t know how she’ll live without the Nightingale.

But there’s someone wrapped in this mess who seems determined not to let the Nightingale, or Honor Huxley, or especially Vivian, go on living at all.

Escape Rating B: There has been a veritable spate of recent mysteries or fantasies with mystery elements set in the Jazz Age in recent months, all featuring female amateur detectives who are in over their heads so far that they nearly drown. The time period is fascinating because the illicit nature of the speakeasies encouraged a breakdown of social barriers, allowing all sorts of people to mix and mingle in ways that would have been impossible before.

The cover of Last Call at the Nightingale was so evocative of the era and the ambiance that I was hoping that the story would be up with the other recent trips back to the 1920s such as Dead, Dead Girls, Wild and Wicked Things, Bindle Punk Bruja and my absolute favorite, Comeuppance Served Cold.

This was a story where I flipped between listening and reading. I was in a time crunch and I really did want to find out whodunnit and whether I was right about the things I managed to guess in advance. Some books are much better one way than the other, but this turned out to be one where it didn’t matter. The narrator did a good job with the various accents and characters, but the performance didn’t elevate the material above and beyond what was on the page.

Whether in audio or text, I would say that this is a story that I liked more than I loved, and I think that’s down to its protagonist Vivian Kelly. In her mid-20s with no family other than her sister, raised in an orphanage, barely making ends meet, Vivian is poor and Irish and would probably be called “white trash” behind her back if not to her face. It would have to have been a “hard-knock life” as the play Annie put it, and she’d have to have more sharp edges and street smarts than she seems to.

Or it could be that the intervening century between her time and ours has made us much more jaded than she was. As soon as the public story about the situation with the dead man’s widow, her young sister and her bastard of a dead husband was revealed, it was screamingly obvious what the underlying cause of that part of the mess was – and Vivian didn’t even think it. Which felt off and made Vivian a bit more incongruous than I could quite believe.

Which doesn’t mean that the setup of the story wasn’t fascinating, or that the reveal of both whodunnit and why wasn’t completely earned. In the end, this reads like Vivian Kelly’s coming-of-age story, and sets up the possibility of more to come. If that more doesn’t materialize, this one is absolutely complete in and of itself. It’s just that there’s a door in the back of the bar that could lead into another mystery.

One of the things that I very much did like was the way that we explore Vivian’s world, both the good parts and the bad, as she undertakes her undercover adventure for Honor Huxley. Vivian’s journey travels through the dark places and shines a light on them without being preachy but still showing clearly just how much was wrong and how hugely unequal the many, many inequities were. And that the Nightingale was a haven where those things didn’t have to happen.

By the time we leave Vivian, she is only a tiny bit older, but much sadder and maybe a little wiser. She learns that nothing she thought was true at the beginning was, and that the people we look up to are in position to use us and hurt us the most. And that she’s going to have to be a lot smarter and grow a much tougher skin if she’s going to survive in the world she has chosen to inhabit.

If this does turn out to be the first in a series as both the Goodreads and Amazon blurbs seem to indicate, I’ll be very curious to see how well, or even if, she manages either of those things.