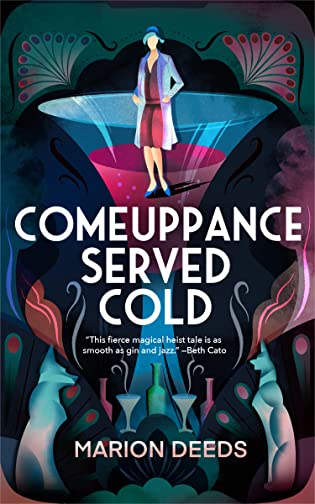 Seattle, 1929—a bitterly divided city overflowing with wealth, violence, and magic.
A respected magus and city leader intent on criminalizing Seattle’s most vulnerable magickers hires a young woman as a lady’s companion to curb his rebellious daughter’s outrageous behavior.
The widowed owner of a speakeasy encounters an opportunity to make her husband’s murderer pay while she tries to keep her shapeshifter brother safe.
A notorious thief slips into the city to complete a delicate and dangerous job that will leave chaos in its wake.
One thing is for certain—comeuppance, eventually, waits for everyone.

This story opens at the close. Literally. It begins at the end, then works its way backwards, just like all the best caper stories. Which this most definitely is.

When we first meet Dolly White, she is leaving the scene of the crime she has just committed, wearing a mask that allows her to appear as the man she has just framed for that crime. We don’t really know who she is, or more importantly why she has just gone to all this trouble to set this man up, why she wants to bring him down, or what led both of them to the place she has just left.

We just know it’s going to be fascinating.

The story moves backwards, inexorably, until we know who Dolly White is – as much as anyone ever does – and why it was so extremely necessary that Francis Earnshaw get his just desserts. His comeuppance. And why and how the mysterious Dolly White turned out to be the instrument of so many people’s justice.

Escape Rating A-: This one is a lot of fun, especially for readers who have been wondering where urban fantasy went. Because this feels a lot like it, to the point where I’m starting to wonder if the genre isn’t coming back with a slightly historical twist under the “gaslamp” moniker.

There’s also just a bit of Seanan McGuire’s Wayward Children here. Dolly White, or Comeuppance Rather as she was named at birth, seems to be one of those Wayward Children who came back from wherever her door took her and either never found it again, or never looked for it again. As this story takes place in 1929, it’s considerably before Miss West opened her school, and Dolly/Comeuppance seems to have the nightmares and missing pieces to fit her right into that series.

Dolly is also the Tin Man. She isn’t certain that the fae didn’t take her heart when they abducted her as a child. She’s certain she doesn’t have one now. Not even when she feels like it’s breaking.

Comeuppance Served Cold sits on that uneasy border between fantasy and historical mystery. The setting is Seattle in 1929, just as the Great Depression is about to rain on EVERYONE’s parade. The magic added to the setting is a fascinating, darkly sparkling gloss on the story, but this didn’t HAVE to be fantasy. All the elements would work just as well in a historical thriller, as the story is about rich men behaving very badly and using money, influence and lies to slither out from under the consequences. Only to have someone they don’t expect exert some surprising leverage. And comeuppance.

The magic makes the explicit commentary about rich people, abuse, political shenanigans and misdirection a bit easier to swallow. And also sucks the reader in and makes everything just that bit more fascinating.

So if you’re looking for a little bit of magical sparkle to liven up your historical thrillers, Comeuppance Served Cold is a lovely, chilly little treat. Especially as it feels like the opening to a series. Which would be especially magical.