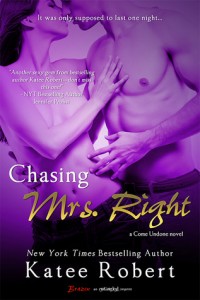 It was only supposed to last one night…

Roxanne Stokes doesn’t believe in love. She does, however, believe in the sexy-as-sin stranger who literally knocks her off her feet in front of a nightclub. The chemistry sparking between them takes her breath away, and she’ll do anything to ease the pain in his eyes…until she realizes the handsome stranger is her best friend’s older brother who’s just come home from war.

Ian Walser had no idea the gorgeous woman he slept with the night of his homecoming party was his little sister’s best friend—or that she’d be gone before morning. Roxanne’s touch soothes him in a way nothing else can, and he’s not ready to walk away from that yet. Not when spending time with her gave Ian a glimpse of everything he’s ever wanted.

When his sister unwittingly pushes them together, he sees his chance. But convincing a woman who doesn’t believe in love that she’s his Mrs. Right might be harder than any mission Ian’s undertaken. Good thing this soldier likes a challenge…

Ian and Roxanne are two people with serious issues. He comes home from two military tours with serious PTSD. She has commitment issues to the point that whenever she begins to get close to a man, she hears her mother’s voice in her head telling her how many different ways the man is going to disappoint her.

Needless to say, this is a sex-into-love romance, because that’s the only way that Roxanne could manage a relationship with anyone. She tries to derail any budding romance with sex at every single turn.

And Ian, for some reason that he can’t figure out, just touching her keeps him grounded. Not necessarily sex, but simply holding her hand keeps his panic at bay. It doesn’t calm hers, but it helps his.

She only wants a one-night-stand. That’s all she ever lets herself have. But her BFF is his little sister. It’s not possible for her to walk away from the reaction he sparks in her. And they are combustible, every single time they get near each other.

His problem with Roxanne is keeping that incendiary reaction from burning out of control long enough to forge a real connection, because she’s so scared that she tries to sabotage every attempt he makes to reach her heart.

Are they too damaged to have a chance?

Escape Rating C: This was not a good book to read Mother’s Day weekend. The messages in Roxanne’s head from her mother do not endear the reader to that woman. We do meet Ian’s mother, and his mother is a real piece of work. I wanted to slap her right through my iPad.

The insta-lust was a great way to open the story, but the insta-love connection was never explained. Why did this relationship work outside the bedroom? She didn’t want to need him (or anyone) and he needed her because of an inexplicable connection. Then the loose ends were wrapped up in a huge hurry to make the happy ending.

Ian made progress on his issues through the book, but Roxanne just miraculously seemed to stop having hers because he was so yummy, or because the sex was so good, or something like that. The build up of their relationship didn’t quite work for me.