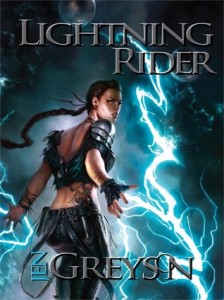 For Evy Rivera, thunderstorms have always caused her physical pain, but she’s never known why. When a record-setting storm arrives on the same night her father finds ancient ancestral documents, Evy is set aglow with mysterious tiny lightnings she can command.

Even worse, she alerts some people in the universe who’ve been looking for her family for a very long time.

Thrown back into ancient Spain and tasked with killing a Spanish legend, she must train alongside Constantine, a sexy yet obstinate Roman warrior. He teaches her how to wield her lightning as a weapon, through more errors than trials. With a relationship as explosive as their late-night training sessions, Evy and Constantine battle their push-pull relationship while trying to ignore the two-thousand-year difference in their birthdates.

Ilif Rotiart, her quasi-mentor, is appalled at Evy’s skill. He would prefer to train her father and keep Evy on the sidelines—where women belong. Evy has a feeling Ilif is keeping something from them, but she must play nice until she uncovers the truth. And if he’s lying, it will be the worst day of his four-hundred-year life.

Penya Sepadas claims she’s Evy’s rightful trainer, and she has the prophecy to prove it. Penya doesn’t share Ilif’s misogynistic attitude, but she does have her own agenda . . . and her own secrets.

Evy must sort through the lies and find the truth behind her family’s time-traveling past before the wrong history obliterates the future. She’s spent her whole life fighting for her place. Now, as the first female lightning rider, she’ll dedicate her existence to fighting to save the world.

But will Evy learn to manage her lightning and find the truth before it’s too late?

Lightning is magic. Haven’t we all believed that when we’ve seen the beauty and power of a storm?

For Evy Rivera, lightning really is magic, magic she can ride like the motorcycles she loves. She rides the lightning, and it takes her forwards and backwards in time. It’s the ultimate trip.

Riding the lightning is a great adventure. But with great power, comes great responsibility. When she arcs to somewhen other, it’s because there is something she needs to do, someone she needs to save.

It’s a responsibility that has been passed through her family for millennia. But only from father to son. There are not supposed to be any female riders.

Back in Roman Spain, 2000 years ago, Penya is waiting for the rider of prophecy. She’s waiting for Evy. Penya is sitting on one of the cruxes of history. Evy is supposed to come back to Penya’s time and assassinate a Spanish rebel leader. It’s happened before, and it’s supposed to happen again.

In the present, there’s a man named Ilif. He says he’s there to guide Evy’s father in becoming a rider, but his motives are much less pure.

Evy’s quest is to save the past, and the future, before it’s too late.

Escape Rating B+: Particularly for a first novel, Lightning Rider was amazingly good.

The start is a teensy bit rocky. Evy’s breakup with her thieving ex-boyfriend, the thing that propels her down the road to her parent’s house in the first chapter still seems slightly random, but once she gets to her “Papi’s”, the action never stops.

Lightning Rider is a “time war” type story. Ilif is manipulating events for some murky purpose, and Penya is trying to stop him. Maybe. We don’t actually know what their motives are, but Ilif is not on the side of the angels. 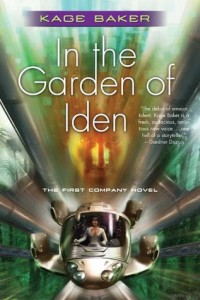 I love “time war” stories. There’s a hint of Kage Baker’s The Company in this, which is always good, but Evy seems to have more agency than Mendoza did. (Start with In the Garden of Iden, which is still awesome.)

This does have an element of the “needs of the many outweigh the needs of the few” as well. The man in the past who needs to be assassinated was a hero in his time, but history needs to remain unchanged. If it’s changed, our future gets wiped out. It’s a hard lesson.

The ending of Lightning Rider leaves the reader hanging. This story is definitely not over. I just wish I knew when to look for the next part!