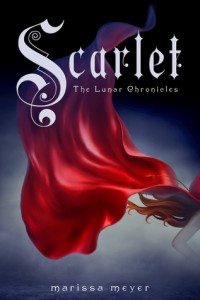 Cinder, the cyborg mechanic, returns in the second thrilling installment of the bestselling Lunar Chronicles. She’s trying to break out of prison–even though if she succeeds, she’ll be the Commonwealth’s most wanted fugitive.

Halfway around the world, Scarlet Benoit’s grandmother is missing. It turns out there are many things Scarlet doesn’t know about her grandmother or the grave danger she has lived in her whole life. When Scarlet encounters Wolf, a street fighter who may have information as to her grandmother’s whereabouts, she is loath to trust this stranger, but is inexplicably drawn to him, and he to her. As Scarlet and Wolf unravel one mystery, they encounter another when they meet Cinder. Now, all of them must stay one step ahead of the vicious Lunar Queen Levana, who will do anything for the handsome Prince Kai to become her husband, her king, her prisoner.

Scarlet could be called the cybernetic fairy tales, part two. This is the second book in Marissa Meyer’s Lunar Chronicles, so if you haven’t read book one, her dystopian re-telling of Cinderella (Cinder, reviewed here), stop now. Book two is Red Riding-Hood’s turn. In this futuristic turn, make that hood a red hoodie.

Everything else has been transmuted as well. Red’s–oops, I meant Scarlet’s–beloved grandmother has not, well not exactly, been eaten by a wolf. When the story starts, Scarlet Benoit’s beloved grand-mere has disappeared. The officials are calling it a voluntary disappearance. After all, everyone knew that Michelle Benoit was crazy.

Except her granddaughter, who just wouldn’t let it go. And that’s where the story begins. Scarlet, refusing to believe that her grandmother just left her behind, blows her red-headed temper up while delivering vegetables from their farm to a customer. Being discovered by a day-laborer, and night-time bare-knuckles fighter named, of course, Wolf, who has never eaten a fresh tomato before.

Scarlet spends most of the story trying to figure out whether big, powerful Wolf is one of the good guys or one of the bad guys who has been trying to fool her all along. And she’s right to be suspicious. Because Wolf isn’t any too sure himself.

But all the while that Scarlet and Wolf are hunting for Scarlet’s grandmother, Cinder is on the run trying to find that very same Michelle Benoit. Because Cinder has discovered that Michelle Benoit, once upon a time, was one of the Earth officers that may have been part of saving her from Lunar when she was a baby. And part of her adoption by Garan Linh so many years later.

Meanwhile, Queen Levana is hunting all of them. And Emperor Kai’s time, and the Earth’s, is running out.

Escape Rating B+: The three stories are interwoven so tightly that the reading flows from one to another seamlessly, even before Cinder and Scarlet inevitably meet.

Cinder spends a lot of the story hoping that there is a way out. She wants to be free, but she’s smart enough to know that being Queen or even leading a Rebel Alliance is about as far from freedom as a person, or cyborg, can get.

Scarlet and Wolf’s love story hinges on a concept that has been used before in paranormal romance, the idea that cross-breeding with wolf genetics will accidentally build in the conditioning that wolves mate for life. Just because it’s been used before doesn’t mean it can’t be used effectively again or that it wasn’t effective here.

I have a question about Queen Levana. A big question. Why is she doing all this? Why go through all these machinations to take over the Earth? She seems to have more than enough power and military might, as well as magical charisma to just charm everyone into submission. There’s something I’m simply not seeing about her motives. And she’s just too bwahaha evil to make sense. 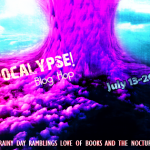