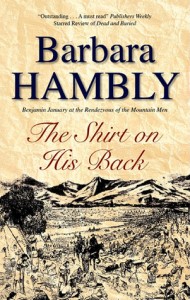 There’s a banking crisis. Too many people lose everything they have invested when the banks fail, and their investments are suddenly worthless. Major banks close. Jobs are hard to come by. People who were doing mostly okay start to think they might lose their homes to foreclosure.

But in The Shirt On His Back, the tenth of Barbara Hambly’s Benjamin January historical mysteries, the banking crisis is the Panic of 1837, under the new Presidency of Martin Van Buren.

Ben January, a free man of color in New Orleans, is a Paris-trained surgeon who is not permitted to practice in the pre-Civil War U.S. In the South, he has to keep his papers with him at all times to prevent being falsely picked up as a runaway slave.

He makes his living as a piano player, and he is excellent at that profession. He also gives lessons to the mixed-race daughters of liaisons between the local planters and their mixed-race mistresses. Women just like his sisters.

His wife Rose runs a school for girls. But families cut back on lessons and school when times get tough. Then the bank closes, and their savings are lost.

Sometimes, Ben solves murders, by assisting the New Orleans Police in the person of Lieutenant Abishag Shaw. Shaw has come to trust Ben’s judgment, a far and delicate reach across race and class in that time and place that they have both come to value.

So when Shaw comes to Ben with a job offer, Ben takes it, no questions asked. He needs the money. And he trusts Shaw.

Ben should have asked some questions first, because Shaw sets out on the road to vengeance, to a place where no one will stay his hand, where no one will punish him for shooting the man who killed his brother.

But it is the journey of a lifetime. A trip into the Rocky Mountains, to see a way of life that was already dying. They are heading to a fur trappers’ rendezvous to trap a killer. Unless he traps them first.

Escape Rating B: The two things that stand out in this story are the portrait of the fur trappers’ rendezvous and that we finally get some hints about Shaw’s background.

By 1837, the world of the fur trappers was coming to an end, and some of them, at least, knew it. Beavers were being hunted to extinction. The Natives’ way of life was being undermined by “civilization”, disease and alcohol. Most of all, the pristine, uninhabited wilderness was getting crowded with colonists. Americans were moving towards the “Oregon country”.

There’s a patina of nostalgia throughout the story. Men who can see their world coming to an end, and Ben January’s yearning for the wife he left behind in New Orleans.

The story we follow is Shaw’s need to find the man who murdered his younger brother Johnny. The problem is that Shaw doesn’t know what the murderer, Frank Boden, even looks like. So we have a search, an investigation, and finally, some resolution, although not exactly the one that Shaw was hoping for. 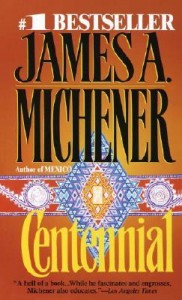 The murder investigation takes a backseat to the adventure story. Although the wilderness adventure is fascinating (and reminded me fondly of the early chapters of James Michener’s Centennial), Benjamin January’s story loses something when one of its most important characters is missing.

One thought on “Review: The Shirt on His Back by Barbara Hambly”