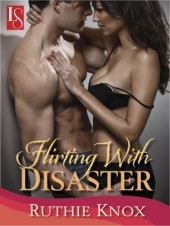 Fresh out of a fiasco of a marriage, Katie Clark has retreated to her hometown to start over. The new Katie is sophisticated, cavalier, and hell-bent on kicking butt at her job in her brother’s security firm. But on her first assignment—digging up the truth about the stalker threatening a world-famous singer-songwriter—Katie must endure the silent treatment from a stern but sexy partner who doesn’t want her help . . . or her company.

Sean Owens knows that if he opens his mouth around Katie, she’ll instantly remember him as the geeky kid who sat behind her in high school. Silence is golden, but he can’t keep quiet forever, not with Katie stampeding through their investigation. It’s time for Sean to step up and take control of the case, and his decade-old crush. If he can break through Katie’s newfound independence, they just might find they make a perfect team—on the road, on the job, and in bed.

Flirting with Disaster is the response to that age-old cliche that says you can’t go home again. Or maybe you can, but only by reverting to whoever you were in high school. Which explains a whole lot of what goes on at high school reunions, and the disaster that Sean Owens is flirting with.

Katie Clark came home pretty much with her tail between her legs. The marriage that took her to Alaska and stole a lot of her self-esteem left her sadder and wiser and needing to start over because her ex took their combined savings on her way out the door.

The new Katie is finally divorced and determined not to get caught up in fixing other people’s problems again. That’s how she got trapped the first time.

But Sean Owens needs Katie’s special brand of fixing. He came home to Camelot to wind up his mother’s estate, and just got stuck. He can’t get past all the reasons he left Camelot and his mother behind ten years ago, but he also can’t make himself leave. So he’s keeping himself busy by working for Caleb Clark’s personal security company in Camelot.

Meanwhile, his own high-tech security company in Silicon Valley is crashing without him.

In California, Sean Owens is self-confident and in control of everything around him. In Camelot, he’s the stuttering mess he was back in school, all over again. Not just because Camelot brings out all the worst crap his mother put him through, but because he’s had a crush on Katie since, well, forever.

Escape Rating A-: At first, the story seems so simple, Katie is finally getting her act together after the divorce from her loser ex. I’m amazed her brother doesn’t go find him and punch his lights out, but that’s just a daydream scene.

Katie needs a self-confidence boost, and after you read about her ex, it’s understandable. So when she wants to be more than just her brother’s office manager, it makes sense. But the case pretty much goes pear-shaped in a crazy way, and that’s where the story really kicks in.

The case is to protect a rock singer with a career that isn’t what it used to be. But he’s got a stalker. And a weird thing about Katie’s aura. Sean comes along to protect Katie more than the rock singer, and that’s where the fun starts. Rock singer making a play for Katie is the kick in the pants that Sean needs to go after the woman he’s always wanted.

But what makes this story shine is the depth of the characters. Sean and Katie are hot together, Ruthie Knox writes great sexual tension leading to marvelously yummy sex scenes, but that’s never all there is.

Katie has to figure out who she wants to be when she grows up. And that she is going to help Sean deal with the reason he can’t manage to make himself leave Camelot, even if it means letting him go. Because helping people to fix themselves is her best self.

She even figures out who the stalker is, with a little bit of techno razzle-dazzle from Sean. The characters make this story sing, even when the rock star isn’t on stage.

One thought on “Review: Flirting With Disaster by Ruthie Knox”