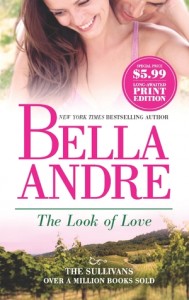 Sometimes one look is all it takes

Chloe Peterson has vowed never to make the mistake of trusting a man again. Her reasons are as vivid as the bruises on her cheek. So when her car skids off a wet country road straight into a ditch, she’s convinced the gorgeous guy who rescues her must be too good to be true.

As a successful international photographer, Chase Sullivan has his pick of beautiful women. He’s satisfied with his life—until he finds Chloe and her totaled car on the side of the road in Napa Valley.

With every loving look—and every sinfully sweet caress—the attraction between them sizzles, and Chloe can’t help but wonder if she’s met the man who may be the exception to her rule…

The Sullivans are a family that readers will want to fall in love with. So it’s a good thing that there are so many of them! Six handsome brothers and two beautiful sisters, plus mom is a widow (I confess to wondering if mom will get her own story somehow).

This first story is brother Chase’s story, and contrary to convention, Chase is not the oldest brother, he’s number three in the family. He’s also a playboy but falls into the trope of suddenly ready to settle down when he meets the right woman. That’s okay, it works when he meets Chloe.

I think all the Sullivans are going to turn out to have a “knight in shining armor” streak. Their mom definitely raised them right. Chase rescues Chloe from a car wreck in the middle of a major storm. She’s also sporting a killer bruise on her face, so it’s pretty obvious that she needs some other kind of rescue, but that’s more than she can accept.

Automobile service in the middle of nowhere is pure necessity. Her cell phone is dead and it’s freezing. What she doesn’t count on is getting swept into Chase’s world of fashion photography, because that’s what he does.

Chloe doesn’t trust the instant attraction between them, because she’s made that kind of mistake before. But she needs a place to retreat, and Sullivan Winery turns out to be the perfect place. By slow degrees, Chloe becomes an integral part of Chase’s photo shoot at his brother Marcus’ winery.

She doesn’t want to explore the feelings that Chase arouses in her, either the physical sensations or the emotions, but the more time they spend together, the harder it is for her to resist.

Chase is nothing like the ex-husband who abused her. It just takes a few days for her head to catch up with her heart to tell her what she really feels.

While Chase spends all his time making sure that Chloe understands that he wants the best of whatever part of her he can have…on her terms.

Escape Rating B: The Look of Love is a fun, hot, sweet romance. The relationship between Chase and Chloe starts out slow and then builds a lot of heat pretty quickly. Emotionally, it’s a sweet roller-coaster ride. Chloe is naturally reluctant to get emotionally involved, but Chase is hooked from the beginning. Their push-pull is well-done.

The family is terrific! Chloe at the Sullivan family dinner brought out all the family dynamics and made me eager to find out what happens to everyone else. (I admit I really want to see the librarian daughter get a fantastic HEA!) But brother Marcus is suffering at the moment, so I hope his story resolves soon. The sibling banter was loads of fun. This is a tremendously likeable family and it will be great to read each story and keep up with everyone as their lives unfold. 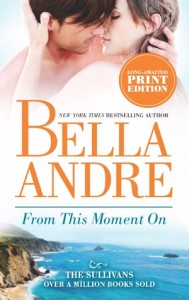 But I’m glad From This Moment On is Marcus’ story. From the backstory of the family, he’s suffered long enough!

2 thoughts on “Review: The Look of Love by Bella Andre”