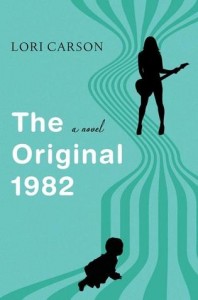 It’s 1982, and Lisa is a 24-year-old waitress in New York City, an aspiring singer/songwriter, and girlfriend to a famous musician. That year, she makes a decision, almost without thinking about it.

But what if what if her decision had been different?

In a new 1982, Lisa chooses differently. Her career takes another direction. She becomes a mother. She loves differently—yet some things remain the same.

If things were different, everything would be different. In Terry Pratchett’s Discworld, it’s called the other leg of the trousers of time.

If you could choose one decision in your life, and go down the other path, what would you do?

Telling this version of her story, Lisa chooses differently. In her alternate version of 1982, she chooses to become a single mother to her baby, instead of having an abortion. In the other 1982, Lisa has the little girl she names Minnow, instead of a semi-celebrated musical career.

In neither version of her life does she have a happily ever after with Minnow’s father, a slightly older and somewhat more famous Latin-American singer. Gabriel Luna wasn’t capable of making a family, or even being faithful. In the original 1982, he was simply the first of several addictions. In the Minnow-future, Lisa did a better job of leaving him behind sooner, if only for the sake of her daughter.

But what this story does is imagine, not just one simple change, but how that one instant affects an entire life. Lisa has a child instead of an abortion. With Minnow in her life, every single thing that happens after is altered, and so is every person who walks part of her journey with her.

She continues as a waitress instead of making a career on the road as a singer-songwriter. The people who would have been her bandmates forge their careers with other bands. But the music is part of her soul. It sometimes takes a backseat to making a living, motherhood, or simple exhaustion. But she never gives up.

In the end, she is still a singer-songwriter, but it all happens differently. And she has Minnow. It might have been. But it didn’t.

Escape Rating B+: One of my favorite poems is Robert Frost’s “The Road Not Taken”. The Original 1982 is Lisa’s re-imagining her whole life as that road. Reaching mid-life, we all struggle with these kinds of questions, wondering what would have happened if we’d taken the other fork at too many important bends in the road, dealing with regrets about what might have been.

It’s telling that in neither future does she get the guy. He’s not the dream. Her daughter was the dream.

Because this book was written by Lori Carson of the Golden Palominos, there’s a meta question about how much of the story is autobiographical. It reminded me of Carly Simon’s famous song, “You’re So Vain”, and the persistent rumor that the subject was Warren Beatty. Or Mick Jagger.

I wonder who Gabriel Luna was in Lori Carson’s life. If there was such a person, or persons.

But we’ve all faced choices where we wonder what might have happened if we’d picked the other road. This story, this other 1982, makes you stop and think about those choices.