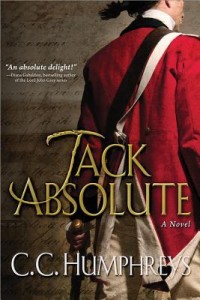 The year is 1777. As the war for American independence rages across the sea, London is swept off its feet by Jack Absolute, the dashing rogue in Richard Sheridan’s comedy The Rivals. That is, until the real Jack Absolute, former captain of the 16th Light Dragoons, returns after years abroad to discover this slander of his reputation.

Before he can even protest, he is embroiled in a duel over an alluring actress of questionable repute, and his only escape is the one he most dreads: to be pressed again into the King’s service—this time, as a spy for the British in the Revolutionary War.

Jack Absolute’s character is written in a way intended to make the reader think of an 18th century James Bond. One of the later Bonds, at the point where he’d begun to get a bit tired of the game and developed some self-reflection.

I certainly got some of that. Jack is a member of a very old profession: he is a spy for the English crown during the American Rebellion. He’s been a spy before, and he is pretty much dragooned into doing it again, in spite of his stated views that us Americans do have some justifications for our actions.

If you’ve ever seen Sheridan’s play The Rivals, you’ve already met Captain Jack Absolute, and it’s quite possible that you have seen the play. It’s famous for the character who gave us the word “malapropism”. That’s right, Mrs. Malaprop supposedly guards the virtue of the heroine in this classic romantic comedy/farce.

Jack Absolute is the romantic hero of the play. In the book, Sheridan the playwright is one of Jack’s friends. He made a hit out of trivializing and romanticizing a real incident in Jack’s life.

Jack’s own life is not a romance, not that he hasn’t played the part of lovesick fool on more than one occasion. As a spy, he’s played whatever role suited the occasion best in order to fulfill his mission.

This mission is in big trouble from the start. General John Burgoyne has been led to believe that there are thousands of Loyalists ready to take up arms against the Rebels as soon as he gives the word. And that equal numbers of Native allies are eager to march with the British Army for the usual inducements.

As history tells us, those assumptions were wrong. Jack didn’t have the advantage of history, but what he did have was several years of experience living in America, including living with the Mohawk. He knew those beliefs couldn’t be right.

Jack had a secondary mission; find the spy within the British command staff, codenamed Diogenes. He thought he was looking for a military officer, not the woman he loved.

Escape Rating A: I did think of James Bond, but mostly I thought of Jamie Fraser and Lord John Grey.

The incredibly, marvelously immersive work of historical fiction that is Jack Absolute kept me flipping pages long past bedtime. The author does a fantastic job capturing the sights and sounds of Colonial America, and of 18th century life. I felt I was there and didn’t want to leave.

The depth of the portrait of life in the British military at this time period was reminiscent of Diana Gabaldon’s Lord John Grey series. Same period, similar perspective and eventually, place. Also, Jack Absolute and Jamie Fraser (Outlander) both knew, and fought with, General Simon Fraser of Balnain. Jack and Jamie (read An Echo in the Bone if you’re curious) were both at the Battle of Saratoga, on opposite sides.

As an American, it is always interesting to read about the Revolution from the perspective of British. The histories written by the victors glorify the Revolution. The British called it a Rebellion. Perspective is everything.

I got swept away by this book, and not just because I found the period details enthralling, although I did. Jack was one of those characters who kept getting more and more fascinating as the book went on, because he was complex. He thought about what he was doing, he didn’t just obey orders. He was tired of the spy game and thought about what it meant, but he was good at his job. His relationship with the Mohawk people, and especially his blood brother Até, is not just a true brotherhood, but is also used as a way to explore the British and American relationship with the Native peoples and the devastation that is inevitably coming.