The elite firefighters of Mount Hood Aviation fly into places even the CIA can't penetrate.
FROM WILDFIRE TO GUNFIRE When former Army National Guard helicopter pilot Robin Harrow joins Mount Hood Aviation, she expect to fight fires for only one season. Instead, she finds herself getting deeply entrenched with one of the most elite firefighting teams in the world. And that's before they send her on a mission that's seriously top secret, with a flight partner who's seriously hot.
Mickey Hamilton loves flying, firefighting, and women, in that order. But when Robin Harrow roars across his radar, his priorities go out the window. On a critical mission deep in enemy territory, their past burns away and they must face each other. Their one shot at a future demands that they first survive the present-together.
"A richly detailed and pulse-pounding read...tender romance flawlessly blended with heart-stopping life-or-death scenes." -RT Book Reviews, 4 1/2 stars for Full Blaze

Whatever was in the water at SOAR seems to also be in the water at Mount Hood Aviation. Everyone who shows up to fly to fire ends up very happily married. And it’s wonderful fun!

Like so many of the books in Buchman’s Firehawks series, the story follows a particular pattern. What makes things interesting is always the characters, both the ones that series readers are familiar with, and the new ones who are introduced or at least focused on in the current entry.

In the case of Flash of Fire, our hero Mickey Hamilton is one of the pilots who has been with MHA for a while, but hasn’t had his own story because he’s been waiting for the right heroine to arrive.

The heroine for Mickey is Robin Harrow. She’s former Army National Guard, and currently serving as a reluctant waitress in the biggest independent truck stop in Arizona. But working at Phoebe’s Truck Stop is a family tradition – her mother did it, and now runs the place. Her grandmother is Phoebe herself. As far as fathers and grandfathers go, they aren’t in the picture. Harrow women don’t have husbands, they have sperm donors.

Someday, Phoebe figures that she will follow the family tradition. But right now, she’s flying lead for Mount Hood Aviation for one glorious season, because Emily Beale is much, much too pregnant to fit in even a helicopter’s cockpit. And Emily sees something in Robin that makes her believe Robin is the right pilot to take her place.

Robin initially sees Mickey as her extra-curricular fun for the summer, for what little downtime MHA seems to get. Mickey discovers that Robin is the only woman he will ever want, and is thunderstruck when she rejects his love, but is still more than willing to share his bedroll, tent, or bunk, as long as there are no strings attached.

Everyone who sees them knows that whatever they have is for the long haul – if Mickey can just muster the patience to let the reluctant Robin figure it out for herself.

And if they can survive not just the dangerous fire season, but also one of MHA’s mysterious Black Ops missions in one of the most dangerous places on Earth.

Escape Rating B+: While the regular firefighting is always interesting, it’s the crazy Black Ops missions that send these books into the stratosphere of nail-biting tension. As much as I enjoyed this story, it took a little longer than usual for the insane part of the fun to really begin.

Once they take off for parts nearly unknown, across the DMZ in North Korea, the action in this book ramps up to a thrill a minute.

For those new to the series who don’t want to start with either Pure Heat, the first Firehawks book, or The Night is Mine, where Emily Beale and Mark Henderson’s story really begins in the Night Stalkers, Flash of Fire is a great place to pick up the series.

Because Robin is a complete outsider to both MHA and the folks who came over or drop in from SOAR, everyone has to get introduced to her, and she has to learn everyone’s place in this high-adrenaline “family of choice”. For new readers, her introduction is their introduction. For those who have followed the series, it’s a nice refresher. At something like 20 books in for the combined series, the cast is getting pretty large. It’s always nice to see how everyone is doing.

In general, Robin makes a very interesting heroine to follow. She’s the best of the best, but she always thinks she still has so much to learn. While everyone around her at MHA is better at one thing or another than she is, Robin is excellent at pulling all those things together and creating coherence. She makes good decisions fast, which is a talent desperately needed when flying to fire, because the fire moves and changes quicker than an eye blink.

At the same time, she’s always living in the moment. She signs on to MHA for a one season contract, not because she doesn’t want more, but because that’s all they need. Emily Beale won’t be pregnant forever, however much it may seem like it by the start of her third trimester. So Robin believes that she and Mickey can only have one season, and that it is stupid to get involved when she knows she has to leave, while MHA is his home.

Not that Robin doesn’t think emotional involvement isn’t inherently just a bit stupid, and not that her family history doesn’t make her believe that it won’t work for her. Her personal history also contributes. Men want to challenge the strong soldier woman, or they want to break her. They don’t fall in love with her, and often don’t even like her very much.

Mickey is something Robin hasn’t encountered before. A man who likes her and is interested in her just the way she is. It’s the one thing she can’t resist, even if it takes her an entire exhausting fire season to finally see the light. That Robin finds not just a man who loves her, but also women who accept her as one of their own, is a marvelous touch. Flash of Fire easily passes the Bechdel Test, as Robin and the women of MHA bond not just over the men in their lives, but the risks they shared as fellow soldiers, and the dangers and rewards of flying to fire.

Like all of the books in both the Night Stalkers and Firehawks series, what makes the story work is that Robin and Mickey are equals in every possible way. Equally strong, equally intelligent, equally excellent at what they do and sometimes equally stubborn. I always love romances where the hero and the heroine are perfectly capable of rescuing each other – and where they both acknowledge it.

M.L. Buchman and Sourcebooks are giving away 5 copies of the first book in the Firehawks series, Pure Heat, to lucky entrants on this tour.

Review: Vacant by Alex Hughes (+ a giveaway and a scavenger hunt) 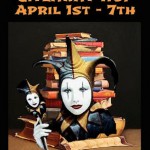