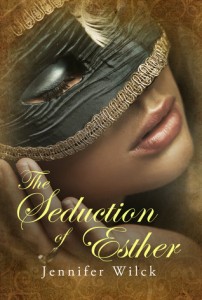 Samara Goldberg has a problem even the most beautiful singing voice can’t fix. She’s a walking disaster, especially when she’s around handsome men. To make matters worse, she’s in desperate need of someone to play the character of Mordecai for the Purim spiel she’s producing and the new congregant, Nathaniel Abramson, is a perfect fit. Nathaniel is a divorced dad who’s recovering from the biggest public scandal of his life. The last thing he needs is a relationship with the choir director at his new synagogue, who also happens to be playing the lead female role of Esther in the very play he’s been coerced into joining.

Woven around the Jewish holiday of Purim, The Seduction of Esther is a story of two people whose lives mirror the plot of the Purim story. Like Esther, who had to hide her Jewish identity from the King of Persia, Samara and Nathaniel are hiding key pieces of themselves. Evil Haman wanted to destroy the Jews, and the nasty Josh will do anything to keep Samara and Nathaniel apart. Will their love survive, like the Jewish people in Shushan, Persia, or will their fear keep them apart?

Esther isn’t actually the one being seduced, Samara is the woman involved in this love triangle. And she’s not so much the seducee as the seducer. Or she would be if she could stop tripping over her own feet long enough.

Samara’s problem is that while she may have the voice of an angel, she has the hands of a klutz, derived from the Yiddish for clumsy person. Samara is extremely clumsy, especially when she is around someone she wants to impress, or people who make her nervous. 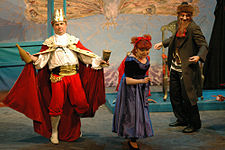 Her beautiful singing voice has made her the choir director at her Temple. She’s also in charge of pretty much anything musical, so she’s the natural person to write musical skits for happy celebrations and holidays like Purim.

There are really two triangles in this story. One involves Samara, her sister Miriam, and Josh. Sam and Josh have been friends for quite a while. Josh wants more and Sam simply doesn’t. It happens. Josh hopes that if he sticks around as a good friend, Sam will eventually see the light. This is not that kind of story. Sam’s sister Miriam would be perfect for Josh. Miriam, is, in fact, already perfect, which is kind of the problem. Josh wants to take Sam on as a project. He thinks he can “fix” her.

We wouldn’t have a story if there wasn’t a new man in the picture. The new guy in town (actually he’s the new guy at the Temple) is Nathan. He’s divorced and has custody of his teenaged daughter. The difference between Nathan and Josh is that Nathan is interested in Sam as she is, not as he wants her to be. His problem is that he doesn’t want to be the subject of gossip, because he’s already been there and done that with his ex.

And Josh, because he hasn’t gotten the message, decides to get in the middle in the hopes of snagging Sam for himself.

Meanwhile, the Purim skit that Sam has created still has to go on, with Sam, Josh and Nathan all playing lead roles that reflect their positions in Sam’s real-life drama. In the play, Sam, as Esther, saves Nathan and banishes Josh. Will life reflect art?

Escape Rating B: This is a lovely story. Even though it takes place in a big city, the tight-knit community of the Temple gives the story a small-town feel–everyone knows everyone and everybody gossips about everything.

This isn’t about good vs. evil. People, even Josh, had good intentions. But just because he thought he had Sam’s best interests at heart, didn’t mean that he really did. And both Nathan and Sam let their past with other people get in the way of a possible happy future. But people do that.

The story is set in the community of Jewish Temple around the Purim holiday. The author sprinkles in some Yiddish and some terms specific to the holiday or to the Temple, but she explains everything fully for those not familiar. Purim is a very fun holiday and this skit sounds like it would be hilarious to see performed. I’m sorry there’s no video! 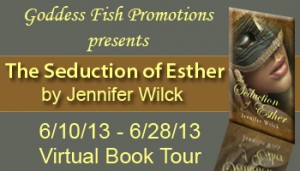 Jennifer will be awarding a $25 Amazon gift card and chocolate to a randomly drawn commenter during the tour (international giveaway).

The more you comment, the better your chances of winning. The tour dates can be found here:
http://goddessfishpromotions.blogspot.com/2013/04/virtual-book-tour-seduction-of-esther.html

29 thoughts on “Review: The Seduction of Esther by Jennifer Wilck + Giveaway”