I don’t say this often enough, but the Stacking the Shelves meme is hosted by Tynga’s Reviews as a way of sharing the enthusiasm about new books that were just received but that a blogger might or might not review for a bit.

This week I didn’t get too many books (for a change) and a couple of them aren’t coming out until September or October. (Hey, wait a minute, summer is just starting!) 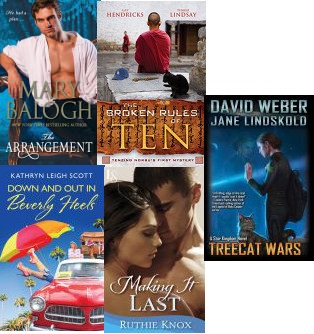 For Review:
The Arrangement by Mary Balogh
The Broken Rules of Ten (Tenzing Norbu #0.5) by Gay Hendricks and Tinker Lindsay
Down and Out in Beverly Heels by Kathryn Leigh Scott
Making It Last (Camelot #4) by Ruthie Knox
Treecat Wars (Stephanie Harrington #3) by David Weber and Jane M. Lindskold