Today I’d like to welcome Susannah Sandlin, who is on tour with her Penton Legacy series. Perhaps I should say welcome back? Susannah’s alter ego, Suzanne Johnson, visited me on April 25 to talk about her other fabulous series, The Sentinels of New Orleans (Royal Street, River Road, and the forthcoming Elysian Fields). The Penton Legacy is more paranormal but equally fantastic. I poured through the whole series like an addict, so I hope more are coming!

Take it away Susannah… 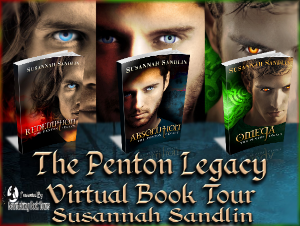 The Unsung Heroines of Paranormal Romance by Susannah Sandlin

We might as well admit it. We read paranormal romance because of the hot guys, right? Sure, there are worlds to save and dragons to slay (well, unless the hot hero IS a dragon, of course). Sure, there are heroines. But it’s the guys we love.

Only, wait a minute. Don’t we need heroines to make heroes out of these guys who (we might as well admit this too) are often on the bullying, mulish side when we first meet them? I think as readers we focus on the heroes, but authors need strong heroines to hold their own with these bad boys and help them find the potential hero lurking inside. I mean, everyone loves Zsadist, right? But without Bella, would he have turned into hero material or continued to self-destruct?

But we also want our heroines to grow and change as well—to have the hero complete something inside them. It shouldn’t be all one-sided, right?

At least those were my thoughts as I went about looking for heroines to help my Penton vampires become heroes.

Aidan Murphy, the hero of Redemption (reviewed here), is a 400ish-year-old Irishman who in his human life was a simple farmer. He had a wife and a young son he loved dearly, but their family story ended tragically and he blames himself. He needs, as the title suggests, redemption. So Aidan needed a level-headed woman who had been through her own blame game but figured out how to survive it, and who could look at him and see the natural leader and compassionate person beneath the vampire. He finds that in a human doctor, Krystal Harris. Krys has been through an abusive past but fought her way out of it. She’s tough and doesn’t want to be managed, so she has trouble trusting anyone enough to relinquish control—or at least share it. Together, Aidan and Krys make a healthy relationship out of a rocky, unhealthy beginning. 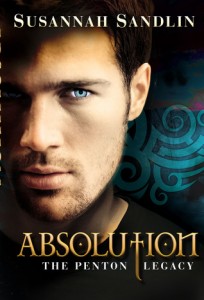 Mirren Kincaid, aka The Slayer, is the bad boy of Absolution. Before being turned vampire, Mirren—of Norse/Scottish descent—was a Scottish gallowglass warrior. A killer for hire. After being turned, he became the executioner for the vampire tribunal. He’s dealt a lot of death and torture in his four centuries of living, and he is very good at it. Until he was asked to do something that made him realize he’d become a monster for people who were worse than the ones he was being sent to kill. So he’s filled with self-loathing and badly in need of absolution. It comes in the unlikely guise of a tough motor-mouth named Gloriana Cummings. Glory has her own issues, because she’s never been accepted. She isn’t well-educated. But she’s resilient and smart, realistic and brutally honest. She doesn’t give a crap about Mirren’s past, because she sees who he is now. Together, Mirren and Glory make an odd, but healthy, twosome.

Will Ludlam, the hero of Omega, is known around the community of Penton as the playboy of the vampire world. He uses his devastatingly good looks and quick charm to keep a wall around himself a mile wide. Because Will has the biggest, most horrible secrets of all of them, and he has no intention of letting anyone in. Especially his annoying partner doing security patrols around Penton, who hates men—especially him. Randa Thomas has only been turned vampire five years, while she was on active duty in the U.S. Army in Afghanistan. Growing up in a military family surrounded by alpha males, she’s had to be tougher, smarter and better than her brothers and father to prove herself. Now she’s a newbie vampire and having to prove herself all over again. Will’s just the kind of guy she hates—rich, smooth-talking, and has had everything handed to him. So you just KNOW these two are going to make an interesting couple.

Next up, in a few months, we will find out what makes our psychiatrist-turned-vampire Cage Reynolds tick. And who will be the one to save him…if he can be saved.

p.s. everyone, Absolution  (the 2012 Holt Medallion winner and Prism Award finalist) is $2.99 for Kindle for a limited time. 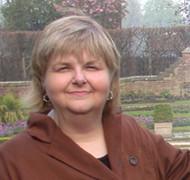 About Susannah SandlinSusannah Sandlin is the author of paranormal romance set in the Deep South, where there are always things that go bump in the night. A journalist by day, Susannah grew up in Alabama reading the gothic novels of Susan Howatch and the horror fantasy of Stephen King. (Um…it is fantasy, right?) The combination of Howatch and King probably explains a lot. Currently a resident of Auburn, Alabama, Susannah has also lived in Illinois, Texas, California, and Louisiana.To learn more about Susannah, visit her website or follow her on Twitter, Facebook, or Goodreads 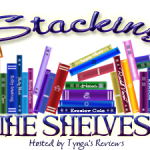