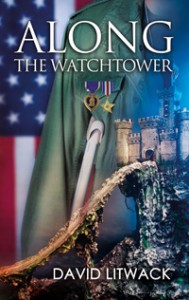 The war in Iraq ended for Lieutenant Freddie Williams when an IED explosion left his mind and body shattered. Once he was a skilled gamer and expert in virtual warfare. Now he’s a broken warrior, emerging from a medically induced coma to discover he’s inhabiting two separate realities. The first is his waking world of pain, family trials, and remorse–and slow rehabilitation through the tender care of Becky, his physical therapist. The second is a dark fantasy realm of quests, demons, and magic that Freddie enters when he sleeps.

In his dreams he is Frederick, Prince of Stormwind, who must make sense of his horrific visions in order to save his embattled kingdom from the monstrous Horde. His only solace awaits him in the royal gardens, where the gentle words of the beautiful gardener, Rebecca, calm the storms in his soul. While in the conscious world, the severely wounded vet faces a strangely similar and equally perilous mission–a journey along a dark road haunted by demons of guilt and memory–and letting patient, loving Becky into his damaged and shuttered heart may be his only way back from Hell.

An uncertain young man who has lost his way, escapes into dreams of a magic kingdom. Normally the story would be that he finds himself a knight in shining armor, performing deeds of derring do. Or something like that.

Instead, in his dreams, Lieutenant Frederick Williams turns himself into a different young man, equally uncertain, but instead of having lost his way, Prince Frederick of Stormwind has just lost his father the King and has to earn his own kingship through a series of unfathomable trials.

In Freddie’s dreams he carries the weight of the entire world on his shoulders. In real life, he has to fight his way through rehab after an IED explosion in Iraq shattered his leg and fragmented his memories.

Freddie’s real life, rehab, the hospital, figuring out what happened and what he’s forgotten, shouldn’t blend so seamlessly with the fantasy of Prince Frederick, but it does. The Prince’s trials mirror the Lieutenant’s.

In both realities, Freddie tries to fight with a weapon something that can only be battled by looking within himself. He needs to mourn his losses, not just the men he lost in the IED explosion, but his parents and his brother. He needs to learn to take responsibility only for what he is truly is responsible for, and not bear the burden of guilt that is not his.

Only when he heals from within can he bear to remember the fallen and move on with his life. As Prince Freddie, the lesson is that not all battles are fought with a blade, some are fought by the spirit and the will.

In both worlds, he has a guide. In real life, she is Becky, his physical therapist. In Stormwind, she is Rebecca, the gardener. Recognizing her for who she can be is part of his test.

If he passes, his life will be better than it ever has been. If he fails, there is only darkness. And Stormwind falls. If Stormwind falls, does Freddie?

Escape Rating B+: The blending of the fantasy with the reality works much better than I expected when I first started it. The tests in the dream life reflect Freddie’s struggles in his real one, and I couldn’t help but wonder what would happen if he failed in the dream.

But the story is about Freddie healing, not just physically, but also emotionally, enough to know what he is and isn’t responsible for. It’s a hard journey. The dream quest worked as symbol and story.

The song “Along the Watchtower” made me think of the reboot of Battlestar Galactica when all the Cylon sleeper agents discovered who they were. This story, too, was about Freddie discovering what he was really made of. Well done. 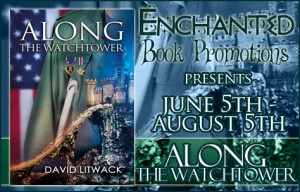 3 thoughts on “Review: Along the Watchtower by David Litwack”