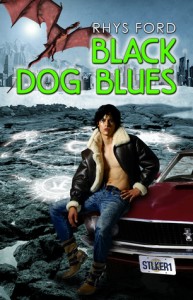 Ever since he’d been part of the pot in a high-stakes poker game, elfin outcast Kai Gracen figured he’d used up any good karma he had when Dempsey, a human Stalker, won the hand and took him in. Following the violent merge of Earth and Underhill, the human and elfin races were left with a messy, monster-ridden world and Stalkers were often the only cavalry willing to ride to someone’s rescue when something shadowy and dark moved into the neighbourhood.

There certainly were no shortage of monsters or people stupidly willing to become lunch for one.

It was a hard life but one Kai liked. And he was good at it. Killing monsters was easy. Especially since he was one himself.

After an accident retired Dempsey out, Kai set up permanent shop in San Diego, contracting out to the local SoCalGov depot. It was a decent life, filled with bounty, a few friends and most importantly, no other elfin around to remind him he wasn’t really human.

That was until a sidhe lord named Ryder arrives in San Diego and Kai is conscripted to do a job for Ryder’s fledgling Dawn Court. It was supposed to a simple run; head up the coast during dragon-mating season to retrieve a pregnant human woman seeking sanctuary with the new Court then back to San Diego. Easy, quick and best of all, profitable. But Ryder’s “simple” run leads to massive trouble and Kai ends up being caught in the middle of a deadly bloodline feud he has no hope of escaping.

No one ever got rich by being a Stalker. But then hardly any of them got old either. The way things were looking, it didn’t look like Kai was going to be the exception.

I’ve always thought that Harry Dresden was the poster boy for urban fantasy, not that Kai Gracen bears ANY resemblance to Harry. But my point is that if anyone is reading Black Dog Blues looking for Kai to get within a continent’s length of a happy ending with anyone of any gender (or species), they’re in the wrong genre. It says so right there on the label.

It’s going to be several books before Kai gets within spitting distance of accepting himself enough to be relationship material for anyone else. I have high hopes for those books.

Also, possibly as a legacy from the TV shows Grimm and Once Upon a Time, there’s been a recent spate of stories portraying the fey (elves, fey, faeries, elfin, a rose by any other name, etc.) as dangerous. Shona Husk’s Outcast Prince (review here) is part of the trend. Black Dog Blues is part of the wave, and oh goodie. The elfin in Bad Dog Blues are immortal, and they have their own agendas. They’re dangerous. Not necessarily evil, although some are, but not automatically good just because they’re elfin. They’re other. As they should be.

The world is futuristic and seems post-apocalyptic. Something happened, some event we don’t know, and “Underhill”, the place of the sidhe and the unsidhe, merged with our world, with very dangerous results. Like dragons mating over the Mojave desert.

Kai is a licensed Stalker. He kills monsters for bounty, among other dangerous things. He’s also an elfin who lives in the mostly human underclass, and that’s where he wants to be. The slow reveal of his backstory is gut-wrenching and incredibly well done.

At first, you think the story of this elfin child being sold over a lost poker game to an old Stalker sounds incredibly cruel. Then you realize that piece of neglect was possibly the best thing that could have happened to Kai.

Now that they’ve found him again, the abuse he suffered as a child picks right back up where it left off. But he’s not a child anymore. Whatever he is.

Verdict: Black Dog Blues is very dark, very gritty, and very well done. The story dives right in to Kai’s world as it is, there’s no history lesson about how things got to be. Kai deals with his life as it is, so the reader does too. It works.

Kai trusts no one, and he’s right not to. Everybody lies, everybody double-deals. On the human side, almost everyone reflexively hates the elfin, but it’s not personal. For him, that’s better than the way his own people treat him.

Being coerced into elfin politics is the last thing he wants, but it’s the job he has to do to keep his license and his living. He knows he’s being set up, but he’s stuck. He endures. Kai is someone who faces into his pain and keeps on going. It’s the only thing he knows.

I didn’t need a love story to make Black Dog Blues work for me. YMMV. I actually didn’t want one because Kai doesn’t like himself enough for him to be a good bet for anyone else. This series is going to be his journey, and it looks like it’s going to be one hell of a ride.

I give  Black Dog Blues by Rhys Ford 4 and ½ stars!