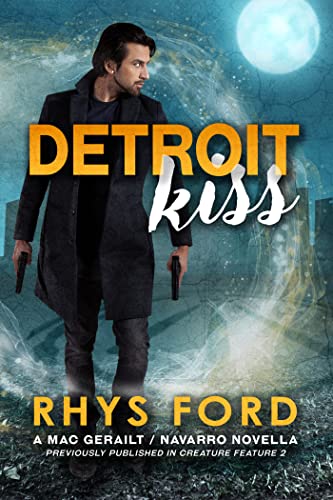 For Javi Navarro, Detroit will become another blood-splattered city in his rearview mirror after he puts its dead back into the ground. Expecting an easy hunting job, Javi instead finds a kiss of ancient vampires on the hunt for a descendant of their long-dead creator.

Reclusive Ciarnan Mac Gerailt abandoned his family legacy of blood and death magic after it nearly destroyed him. Unfortunately for Ciarnan, the Motor City can only be saved if he resumes his dark arts and joins forces with Javi Navarro, the hunter who brought the vampire apocalypse—and hope for the future—straight to Ciarnan’s front door.

Have you been wondering where urban fantasy went? I certainly have. Once upon a time, it was the hottest thing since, well, whatever metaphor seems appropriate for the 1980s or thereabouts, but then it kind of died off, sort of like the vampires that seemed to be the backbone of its antiheroes and tormented villains, sometime in the late 1990s or early 2000s. Not that ongoing series didn’t continue, but new ones just didn’t emerge from the shadows.

So to speak. Ahem.

I love urban fantasy and missed it when it slunk back into those shadows. It was one of my go-to genres when I was in a reading slump. But it’s starting to feel like it’s back from the dead. Or the graveyard. Or wherever it’s been hiding for the last decade or so. (If you don’t believe me, take a look at Holly Black’s Book of Night when it comes out next month. Because the heroine Charlie Hall is pretty much every hard luck and worse trouble kick ass heroine to ever stalk the pages of an urban fantasy. But I digress. Sort of.)

Because when I started reading Detroit Kiss, the first, second and third things I thought of were just how much it reminded me of the early Dresden Files books, to the point where I’m not sure whether Javi’s musings as to why so many magic-wielding heavy-hitters ended up in Detroit instead of Chicago. It felt like half explanation, half intercity rivalry and half homage to Harry Dresden’s stomping ground.

I realize that’s too many halves, but there are always too many somethings nasty in this kind of urban fantasy. In the case of Detroit Kiss, too many feral vampires. The bloodsuckers are definitely not the heroes of this piece. They’re the evil pests, to the point where the good guys call them “ticks” because they are mindless evil bloodsuckers.

So the tone of Detroit Kiss, with Javi Navarro working as a bounty hunter for the beleaguered Detroit Police Department, had the same feel as the early Dresden books, minus Harry’s somewhat leery male gaze. Plus, however, a slightly better love life – eventually – as Javi’s luck turns out to be better than Dresden’s frequently was. At least so far.

We’re introduced to this version of Detroit in decay when a construction crew attempting to revive the city yet again uncovers a “kiss” of vampires who have been trapped underground, gnawing on the bones of their makers and each other for a century. They’ve been stuck in the ruins of a speakeasy since Prohibition with nothing to drink except each other.

Until they eat the construction crew, that is.

But these ticks are fixated on the two magic users whose bones they’ve been picking clean all these years, so once they escape they go hunting for whoever is left of the bloodlines that made them.

And that’s where Ciarnan Mac Gerailt comes in, the only descendant of one of those mages within easy reach. Ciarnan is existing someplace between hiding out and living in an old theater he’s never bothered to refurbish in one of the many down-at-heels neighborhoods in this version of the city. He’s given up the death magic that is his family’s heritage and taken up growing vegetables and just trying to get himself, his wolf dog Elric and his fae familiar Shaddock through the day and the sometimes very long and dark nights.

Ciarnan looked into the abyss, the abyss looked back and took his friends, his apprentice and very nearly his life. He’s given up magic. Really, truly.

At least until Javi Navarro helps him put down one of the entirely too many ticks that has come after him in place of his several greats-grandfather. Javi wants Ciarnan to help gather up the ticks so they can pick the place and time and have a better chance at bringing them down.

And honestly, he just wants Ciarnan the minute he sees him – even though Ciarnan clocks him with a shovel the minute after.

But in order to help Javi, Ciarnan will have to look back into that abyss – and hope to heaven or hell that this time it doesn’t swallow him whole. While praying that the vampires don’t either. 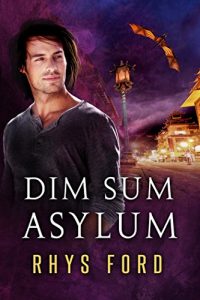 Escape Rating A-: I have one and only one complaint about Detroit Kiss. It’s too damn short.

I mean that. Seriously. It’s too damn short and there aren’t any more. Rather like the author’s Dim Sum Asylum, which was another gem of urban fantasy that bordered just a bit on paranormal romance AND also had a fascinating world that seemed like there was oodles of backstory to explore, a riveting case to solve, a terrific pair of heroes and DAMN no sequel.

I loved the way that this almost-now/nearish future Detroit felt like an all too easy extension of where the city has been for the past decade or two (or maybe three), partially devastated and partly gentrifying and still trying to get back up on its feet in spite of all the forces trying to tear it down.

The magic system seems cool and interesting, and the whole idea of finding a buried speakeasy filled with rogue vamps was an absolutely chilling way to kick things off.

Ciarnan is one of the author’s signature wounded-but-trying heroes who do the right thing even if sometimes for the wrong reasons and are always one half-step away from backsliding into darkness.

The climactic scene is dark, deadly, dangerous AND squicky and heroic at the same time. I’d absolutely adore seeing where these guys and their world go next. I hope the author gets there someday because I’d be all in for it!

One thought on “Review: Detroit Kiss by Rhys Ford”