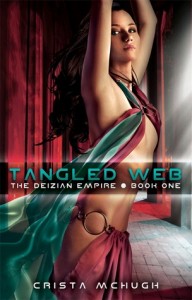 Azurha, a former slave turned deadliest assassin in the empire, has just been offered the ultimate challenge–seduce, then murder the new Emperor. But Titus is not the tyrant his forefathers were, and his radical ideas might be the glimmer of hope the empire needs.

Titus Sergius Flavus has yet to master the powerful magic of his ancestors–magic he must wield if he’s to protect his people–but his father’s death has left him no choice. Rule the Deizian Empire and attempt to right his ancestors’ wrongs, or watch her fall to his greedy kin.

More than just Titus’ ideas hold Azurha captive. Night after night, he awakens desires she thought lost, and uncovers the magic of her hidden lineage. As her deadline approaches, Azurha is forced to make an impossible decision–complete her job and kill the man she loves, or fail and forfeit both their lives.

I was lured into Crista McHugh’s Deizian Empire by a story that sounded an awful lot like Amy Raby’s absolutely fabulous Assassin’s Gambit. It’s a pretty good gambit, I adored that book. But Tangled Web isn’t quite it.

However, it’s still an absorbing story. Let’s say I got quite tangled up in it.

There are a lot of fantasies that use some variation of the Roman Empire as their basis. In addition to the aforementioned Amy Raby series, there’s also Jim Butcher’s Codex Alera, and Lindsay Buroker’s The Emperor’s Edge. What can I say? The Romans did good empire. Long sweep of history, leaving lots of templates for pretty much everything. Sometimes they served as a good example, sometimes as a horrible warning.

In the case of Tangled Web, we have what should be the standard case of a young emperor coming to the throne early, and one who has spent most of his life with his nose buried in a book. He’s a bit naive, or a bit unrealistic. He thinks that he can make the empire work the way it should work, instead of the way it does work.

A lot of influential people will get kicked in the moneybags if he gets his way. Especially the ones who own slaves. So they decide a timely assassination is in order.

Enter the Rabbit. Not the animal, a person. An assassin, in this case, a former slave who freed herself by murdering her master. He and his friends had been raping her for three days by this point, so she considered herself not just more than justified, but beyond caring.

She escaped her fate and became an assassin. Not that easily, but not quite part of our story.

One of Emperor Titus’ cousins hired her to infiltrate his household and assassinate him. The method of infiltration chosen by her contract was for her to become a member of his harem. Azhura turned out to be the only member of Titus’ harem.

And when he refused to force himself on her, like every other man she had every dealt with, she couldn’t bring herself to kill him the first night. That was her fatal mistake. She let her intended victim get too close.

Once she started actually talking with the man she should have killed, she found herself enjoying his company. Even more insane, she discovered that the Emperor was listening to her and taking her advice!

Titus believed that Azurha was the only person around him who did not have some kind of hidden agenda. It was only after he fell in love with her that he discovered exactly how big a fool he was.

And that she was the only person keeping him alive.

Escape Rating A-: Tangled Web is just wildly good fun. The love story is just so classic; the assassin falls in love with her target, but in this case it was very well done.

Azurha was such a mass of contradictions, but understandably so. She was part of a conquered race; her people were slaves. She freed herself through extreme violence and pain, and so she has very little trust. Titus patiently wears down her resistance, because he needs someone to be there just for him, he doesn’t have anyone else.

Their relationship builds up over a few days, instead of him storming her barricades instantly. He could, but he doesn’t. He’s different from what she’s used to, both as a man and as a member of the Deizian race. 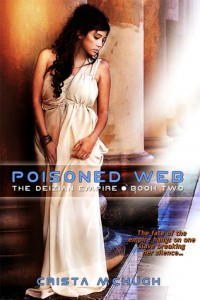 And they’re magical together. Not just the sex, although that too. But the better they are together, the stronger his magic becomes, which is an important plot point that isn’t explained quite as clearly as I would have liked. I hope there is more explanation coming in the rest of the series.

Also, this is labeled as both science fiction romance and fantasy romance. It reads/feels like fantasy, but there are spaceships. There is tech, but it seems to be powered by magic. Or maybe not. Hopefully we’ll see later in the series.

When Azurha started talked with Titus instead of killing him, I kept wanting to shout “she named the puppy!” because that’s what it felt like. Once she let Titus become a real person in her mind instead of the just the faceless Emperor, she was doomed. She named the puppy, and he turned out to be a very handsome puppy, with big strong muscles. Also extremely affectionate!

One thought on “Review: Tangled Web by Crista McHugh”