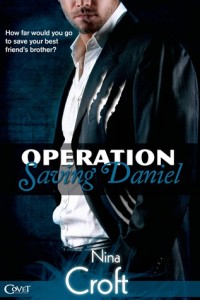 At eighteen, Melissa seduced her best friend Julia’s brother only to run away shortly after. While Daniel was her fairytale prince, Lissa didn’t believe in happy ever afters.

Ten years and a near death experience later, Lissa is ready for a husband and family. But a cry for help from Julia puts that dream on hold. Daniel is acting weird and he’s about to marry his long term girlfriend—AKA The Evil One. Someone needs to save him.

Daniel has never stopped loving Lissa. Ten years ago when he gave her a little freedom, he always intended that one day they would be together. Right up until the moment he was bitten by a werewolf. Now, Daniel has to hide what he is. He won’t risk anyone else, especially the woman he loves.

But Lissa is back. Their attraction is stronger than ever and Lissa is nothing if not tenacious.

There’s a long history of siblings believing that the person their brother or sister is about to marry is not good enough for their favorite family member; possibly even to the point of thinking that person is evil.

Daniel’s sister Julia has no idea just how right she is when she dubs Sophia “The Evil One”–the woman actually is a bitch–a werewolf bitch, that is.

Sophia is glued to Daniel’s side to make sure that he obeys the werewolf Alpha who turned him against his will; and to remind him that if he doesn’t keep his mouth shut about even the existence of the supernatural, more members of his family will die at the hands, or claws, of the wolves.

But Julia doesn’t know any of this, so she brings back the one woman guaranteed to penetrate Daniel’s emotional defenses. She calls Lissa back from managing charitable organizations around the world.

Lissa does humanitarian work, but she’s also running away. From her own past, and from Daniel. The only man she’s ever loved. Just once and ten years ago. But she never forgot.

He never did either. But he’s tried to. Because Lissa is another chink in his armor, another vulnerability. Something he can’t afford to have while he fights for his life. Fights for control.

Daniel is a research chemist. A talent that brought him to the attention of the werewolves ten years ago. A talent that may be his salvation–if he’s willing to push all the edges of the envelope in his research, while using himself as his only test subject.

He’s just afraid that after the battle is over, he will have lost the only thing worth fighting for.

Escape Rating B+: This was just too much fun! The relationship between Daniel and Lissa is such a beautifully realized second chance at love story that you are rooting for them to get together from the very beginning. Their relationship gets off the ground very quickly, but it doesn’t feel like insta-love because there’s all that backstory. They have a second chance.

We also have a “beauty and the beast” tale with a very modern twist. Daniel feels like a beast, not just because he’s an unwilling werewolf, but because he’s using genetic engineering to make himself an even bigger, badder werewolf. He needs to be an Alpha in order to survive, so he’s making himself get there ahead of schedule. He’s just sure that no one will love him, not Lissa, not his family, once they know what he’s become. Of course he’s wrong or we wouldn’t have a story.

One of the funnier bits is that the government knows about the werewolves and other paranormal entities. I hope that there are future books planned in this world and this aspect is explored in more depth. The government agency involved (this is set in Britain) is MI13. There is no MI13. Or is there? If there were, and it were gathering intelligence about paranormal entities, wouldn’t it be even more secret than usual?

Something that was almost hilarious at first reading, but makes you stop and think in retrospect, was Lissa’s and Julia’s reactions to discovering that Daniel was a werewolf. Not merely that they both believed him, but that they found it a much more acceptable explanation for his behavior than that he might have ever had feelings for the evil Sophia. Lycanthropism was more acceptable than a human bitch. It felt like a bit of worldbuilding was missing, albeit in a very fun way. 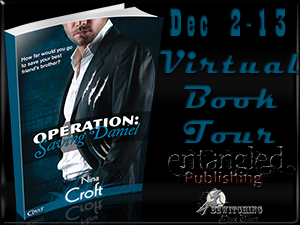 One thought on “Review: Operation Saving Daniel by Nina Croft”