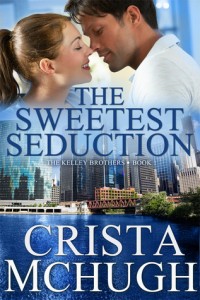 Lia Mantovani has created one of the hottest restaurants on Chicago’s Magnificent Mile, but all that could disappear if she loses her lease with Kelly Properties. Having had her dreams ripped away from her before, she’ll do everything in her power to keep her restaurant. Her fate hangs on the whims of the frustratingly handsome Adam Kelly.

Adam has spent years trying to convince world famous chef Amadeus Schlittler to open a restaurant in Chicago, but he wants the prime location held by Lia. Business has always come first… until sparks fly when Adam meets her. When things get hot outside the kitchen, though, they’re both in danger of getting burned.

The Sweetest Seduction is a much spicier romance than its title suggests. However, this delicious concoction mixing a culinary romance with the start of a family romance series is definitely a tasty treat.

The story starts with two matchmaking mamas who want their hard-working children to discover the kind of happiness that they each found with the late husbands. The two women from different points in the economic spectrum have bonded over widowhood and bridge strategy, but they both want the best for their grown up children.

Emilia Mantovani has a soon-to-be celebrity chef for a daughter. Lia owns La Arrieta, the latest “great restaurant” in Chicago, a city of fantastic restaurants. Lia has poured her life and her life savings into making the restaurant a success, and it’s working. But she has no life.

Maureen Kelly has seven sons, all handsome and successful, with names from Adam to Gideon. (If this sounds a bit like the classic Seven Brides for Seven Brothers, it’s intentional). Adam is a workaholic, spending his days as the property manager for the family business, a job he inherited when his father died.

The mamas pretend that Mrs. Kelly won a home cooked dinner by Chef Lia, and gets Lia out to Lake Geneva to cook it at the family weekend home. Mrs. Kelly then dragoons as many of her sons as possible home in hopes that Lia will strike sparks with one of them.

Adam, Lia, and the Kelly’s Great Pyrenees dog, Jasper, are practically incandescent. And that’s where things start to go both terribly right, and horribly wrong, at the same time.

All of Adam’s attempts to get Lia alone are interrupted by someone or something, from the dog to the sheriff. He couldn’t have worse luck if he tried. Or so he thinks.

In the morning he discovers that not only is he her landlord, but that he is planning to evict her at the end of her sublease to make way for an egotistical has-been celebrity chef. He is so busy pursuing the bottom line that he hasn’t done any basic research to find the treasure right in front of him.

And he keeps on screwing things up until it is almost too late. It takes one more push from those meddling mothers to save the day.

Escape Rating B: I was introduced to Crista McHugh through her fantasy romance series, and I was curious to see what her contemporary romance would be like. The Sweetest Seduction certainly has the same kind of high-tension heated romance, but the reasons for the stress in Adam and Lia’s relationship naturally come from a different source!

The setup for the series is charming and also familiar. Readers who enjoy Bella Andre’s Sullivans series are going to eat the Kelly Brothers up with a spoon. The Sweetest Seduction is a terrific start; the brothers we meet are terrific guys, but several seem to either be unattached or in relationships that are floundering or are with women that Mama Kelly knows isn’t right for her son. And having met Mama Kelly and seen her work her magic with Adam, readers will be willing to bet that she’s right about brothers Brian through Gideon.

Although the series focuses on the Kelly Brothers, this story is about Lia’s dreams. Lia and Adam mix business with pleasure, and the result is nearly disastrous. He has too much power over her future, and she’s been in that position before. The meltdown that resulted is what led her to becoming a chef in the first place. But when she mistakes Adam’s offers to help with an attempt to take over, she goes into full “fight or flight” mode and triggers the final crisis.

Still, it’s easy to understand where she’s coming from. While the logical side of me thinks they should have straightened out the sublease before they hopped in the sack; if they had, there wouldn’t be such a delicious story about the mess they nearly made of things.

I hope canine Jasper comes back in the future stories. He is an absolutely adorable, and awesomely HUGE, comic relief! 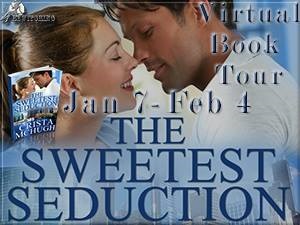 Crista is giving away a Seven Brides for Seven Brothers gift basket with a $25 gift card from the bookstore of winner’s choice (B&N, Amazon, BAM, Book Depository, Chapters/Indigo, etc). Gift card open to international winners, but if winner is from outside the US, some of the items in the basket will not be sent (like the DVD). To enter, fill out the Rafflecopter below.