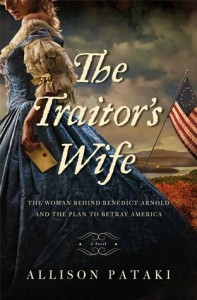 A riveting historical novel about Peggy Shippen Arnold, the cunning wife of Benedict Arnold and mastermind behind America’s most infamous act of treason.

Everyone knows Benedict Arnold—the infamous Revolutionary War General who betrayed America and fled to the British as history’s most notorious turncoat. Many know Arnold’s co-conspirator, Major John André, who was apprehended with Arnold’s documents in his boots and hanged at the orders of General George Washington. But few know of the integral third character in the plot; a charming and cunning young woman, who not only contributed to the betrayal but orchestrated it.

Socialite Peggy Shippen is half Benedict Arnold’s age when she seduces the war hero during his stint as Military Commander of Philadelphia. Blinded by his young bride’s beauty and wit, Arnold does not realize that she harbors a secret: loyalty to the British. Nor does he know that she hides a past romance with the handsome British spy John André. Peggy watches as her husband, crippled from battle wounds and in debt from years of service to the colonies, grows ever more disillusioned with his hero, Washington, and the American cause. Together with her former lover and her disaffected husband, Peggy hatches the plot to deliver West Point to the British and, in exchange, win fame and fortune for herself and Arnold.

Told from the perspective of Peggy’s maid, whose faith in the new nation inspires her to intervene in her mistress’s affairs even when it could cost her everything, The Traitor’s Wife brings these infamous figures to life, illuminating the sordid details and the love triangle that nearly destroyed the American fight for freedom.

The Traitor’s Wife is the best kind of historical fiction; the story feels true even though the reader knows that there isn’t any way to verify how people felt, or what they said in every conversation.

You end up wanting this to be the real story. And maybe it is.

History is so often written from the perspective of the men who seem to be the prime movers and shakers, but, history is written by the victors. For much of history, women were put on a pedestal and kept in their place. That place was not supposed to be in battle, in government or in writing the history books.

The Traitor’s Wife sees that key betrayal of the American Revolution from the point of view of the woman who caused it, and the woman who prevented it.

We all know the story of Benedict Arnold, and his betrayal of the Revolutionary cause. His name has become a byword for treachery. What makes The Traitor’s Wife such a fascinating story is that it isn’t Arnold’s story–it’s his wife’s story.

Also that it is not the tale of her view of her husband’s treason–it’s the story of how she encouraged and aided that treachery. Historical records show that Peggy Shippen Arnold was part of the plot, but they don’t tell us why.

This is a fascinating version of events, because it doesn’t just put Peggy Arnold at the center, but it explains why she did it. More than plausibly, and in a way that rivets the attention.

Peggy is seen through the eyes of her maid, Clara Bell. Clara may not have existed in real life, but she should have. She sees her mistress much more clearly than the men she manipulated.

Clara is the heroine of this tale. While the Arnolds and their conspirators forget that the maid is even in the room, Clara hears and sees everything, and risks her life to assist the Revolution.

So Clara is the person we follow. She starts out as a young woman awed by the splendor of the Shippen household after her impoverished childhood. She bears the brunt of Peggy Shippen’s cruelty, and quietly resists, until she can find a way to make her resistance count.

Escape Rating B+: There are two women at the center of this story; Peggy and Clara. They end up as counterpoint to one another; Peggy is cruel and manipulative to the point of being almost a caricature, and Clara seems to be a bit too good to be true.

It is easy to cast this tale as the fall of Peggy into the depths which we feel she deserves, and the rise of Clara to independence, freedom and true love. Poor Benedict Arnold ends up as the stock character of the foolish older husband manipulated by his beautiful and charismatic young wife.

Except for the introduction of Clara, that could be the true narrative. That’s what makes The Traitor’s Wife so compelling. It feels right. 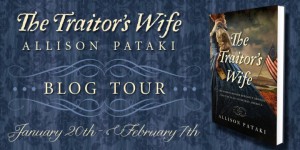