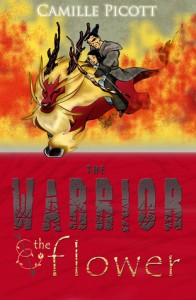 Yi, a retired soldier, has lost everything he loves — his wife, his daughter, and his home. He seeks refuge from his heartache by plunging into a secret mission for the World Emperor. The assignment takes him to the doorstep of a brothel, where he witnesses the madam beating a young girl. Drawn by the child’s striking resemblance to his lost daughter, Yi rushes to her defense and negotiates for her purchase — after all, how hard can it be to care for one little girl? But between the child’s inquisitive nature and the dangerous secret she carries, he gets more than he bargained for.

So what do we have? The story feels like a classic; the warrior with nothing left to live for finds new hope and purpose by adopting a child. But it’s so much more than that.

The warrior of this tale, Yi, has lost his wife and child in the endless war between his people and the Sky Kingdom. The attack on his home is not random, he was guarding a strategic military asset, but his guardianship was a secret, which means that someone at his Emperor’s court has betrayed both the Emperor and Yi.

Yi either wants revenge, or death. Possibly both. Instead, he has his duty. A duty which requires him to travel back to court. Along the journey he rescues the child Tulip from a beating which would have killed her.

Tulip is a very precocious eight. The only world she has ever known is the Empire’s pleasure city, and her home in the brothel where her mother works.

But Tulip is much more than just a child; she also carries a secret, the import of which is not known to her. All she knows is that she can call the lightning.

It’s not until she is taken out of her setting, and brought to court, that she discovers who and what she is.

All she wants to be is Yi’s daughter, and she’s afraid that her secret will take that future away.

Escape Rating A: This story is captivating on so many levels. Yi starts out his journey at such a low point in his life, that watching the character emerge from his despair would make a terrific story all by itself.

Yi begins his journey not wanting to feel anything. He believes that it would be a betrayal of his love for his family to be anything other than a stone-faced and stone-hearted warrior. He doesn’t want to get involved with anyone or anything, including the old friends who come to drag him out of his depression.

Tulip changes everything. He starts out simply rescuing her, but then discovers that he has acquired an obligation to keep and care for her. He doesn’t want to care, but she melts his heart, bit by bit. Her uncanny resemblance to his dead child makes it both easier and more difficult for him. He is drawn to her, but feels like any consideration is a betrayal. And he has to learn how to care for a child; his wife raised their daughter, and he is often befuddled.

When they reach court, entirely new facets of Yi’s position, and the story, are revealed. The political infighting and backstabbing pushes the story along at a breakneck pace. Yi is more than a warrior, and his trusted position makes him both a target and a force for change.

Yi’s change of heart, or Yi finding his heart, reminded me a bit of the plot of the video game, The Last of Us. Hard-hearted warrior finds new life through caring for a child who is more than she seems. Classic, yes, but done excellently in The Warrior & the Flower by showing Tulip’s refreshingly candid point of view.

The story ends with Yi and Tulip beginning another journey together. I can’t wait to find out what they discover. 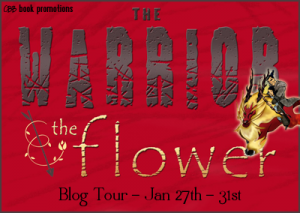 Camille is giving away a $15 Amazon Gift Card! To enter, just fill out the Rafflecopter below.

5 thoughts on “Review: The Warrior and the Flower by Camille Picott + Giveaway”