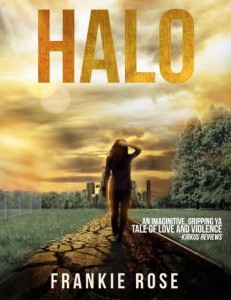 She has no name.

She has her knives; her training; her halo.

When a newly-named Kit escapes the Sanctuary after killing her best friend, the last thing she needs is another knife in her hand. Or Ryka, the damaged, beautiful blonde boy, who she refuses to let save her. Still learning how to process the onslaught of her new feelings, the sights and sounds of Freetown are overwhelming and strange. There are a hundred differences between her old home and her new one, but one thing remains starkly similar: the matches. Yet where the blood in the Sanctuary landed only on the colosseum floor, Kit will quickly learn that a river of red runs through Freetown’s very streets.

Freed from the oppression of a society who stole her right to feel, the true horror of her old life leaves Kit wondering if she really has been freed at all. Would she be better off without the crippling horror of all the blood on her hands, or is the love of one boy worth living through all the pain?

Raksha is the call of the dead. The rumbling chant for fresh blood from the other side, the demand for sacrifice. The colosseum is behind Kit. The fighting pits await.

Following the massive success of The Hunger Games, it is only to be expected that pale imitations will crop up in a blatant attempt to ride those multi-million dollar coattails. This has led to a absolute flurry of Dytopian YA publishing. And let me just say how excited I am to see Dystopian YA edging out all the Twi-lites and Twi-harders. You cannot write a Dystopian YA that I am not going to read.

As with any imploding subgenre, there are fantastic additions (Shatter Me), middle of the pack reads that quickly blur together (Divergent), and non-sensical piles of shit that completely miss the point of the entire goddamn genre.

Guess where on the scale Halo falls?

Halo has an extremely promising start. I greatly enjoyed the Hunger Games meets the Roman Colosseum vibe. In this rigidly class-divided world, you are born and bred for a specific station. Our protagonist is one of the Falin (fighters), whose entire purpose in life is to fight, kill, and die for the entertainment of the bloodthirsty masses. The upperclass “Trues” are socialized to see the Falin as contemptible subhuman animals, thus preventing any niggling morality issues with the monthly child slaughter, while the Falin are drugged and brainwashed into emotionless automatons. This keeps the Falin from uniting to kill their captors.

Ahem. Back to the Dystopian.

The problems with Halo come once Kit escapes from the walled and isolated Sanctuary.

People outside Sanctuary are spread out in cities and towns across the country. Kit stumbles into the nearby Freetown, where she is immediately introduced to a society without the rigid class structures she is accustomed too. However, this so-called “free” town has ridiculously oppressive laws/customs against women.

Kit quickly learns that women are required to wear skirts covered in freaking bells. (A noise burka!) When she notes this would prevent her from, say, quietly moving around town, defending herself from attack, or even outright running away from danger,  she learns this is a non-issue! Because women are forbidden from fighting, being educated in any kind of physical art, or carrying anything that could be construed as a weapon. If Kit doesn’t want to be attacked, sexually assaulted, and/or raped, she has to make herself utterly defenseless. Those obsessive woman-hating child-beating murdering rapists never attack teenage girls! (Aw, shucks grandpa, thanks for ‘splaining things.)

I don’t think I have ever read a book where it was so perfectly clear where it all went wrong. After an attempted gang (implied) rape, Kit is on the verge of being forced to give up her knives for her own, ahem, protection. (I’m serious, that’s their bullshit justification. That she brought the assault on herself, and one day, would totally be raped, and it would be all her fault. For daring to know how to use a knife in self-defense.) Kit beautifully acknowledges the laws of Freetown, and states that she will respect them. By leaving.

Fuck yeah! Kiss these misogynist assholes goodbye, and let their so-called enlightened abolitionist leaders take a hard look at the bullshit laws that send the newly emancipated slave out into the world looking for actual freedom. Kit could go Free Town shopping! Roam the countryside spreading enlightenment and self-defense lessons while dodging bounty hunters from Sanctuary….

Of course that didn’t happen. Instead, Kit gets special dispensation to keep her knives, and a cute teenage boy bodyguard. Because he’ll be able to keep her safe. As opposed to her training and weapons.

Then she has the privilege of spending the rest of the series fighting on behalf of the misogynist shiteaters who keep trying to kill, main, or rape her. Sit back everyone, and watch this train derail.

The point of a YA Dystopian is freedom from oppression, and coming into your own power. Not exchanging one form of slavery for another.  Or being dependent on someone else to protect you when you’re 150% capable to taking care of yourself. I always tell my clients that shack up with a new man right after we’ve kicked the abusive husband to the curb to “Trade Up.”

Kit did not trade up. 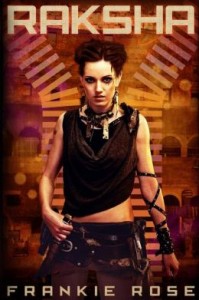 Beyond the blatant and unchallenged misogyny rampant in the book (though there is a super-special woman-hater who keeps whining about all the misandry, and how men just don’t have enough power), you’ll need to be prepared to ignore some bizarrely inept world-building.

A particularly pathetic example pops up when Freetown discusses their trading practices with Sanctuary. Apparently the high-tech walled-off city ships mass quantities of grain and other food out to the country towns in exchange for high-quality weapons produced by artisans out in the sticks.

No really, it makes sense! So long as you don’t know how industry and farming work, but do accept any and all points of plot convenience. (There are many more, this is the just the most blatantly moronic of them.)

Halo was originally published in May of 2013 as Raksha. I prefer the original cover. Kit looks a bit more like the ass-kicking knife-master she is, and less like an indecisive girl wandering aimlessly through a poorly depicted world. Oh, wait…..

Escape Rating: D- for the extreme douchebaggery of taking a goddamn champion gladiator and forcing her to defend a deeply misogynist city. Take a hint from your revamped cover Kit, and walk the fuck away.