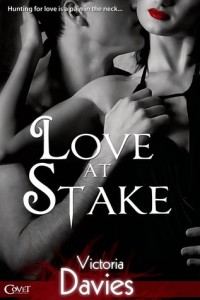 Abbey is the lone human working for Fated Match, a company that pairs members of the supernatural community with their eternal mates.

To snag a young vampire socialite as their next client, Abbey journeys to the home of Lucian Redgrave, the oldest vampire on the East Coast. But he’s not willing to allow his vampire daughter to use the agency… unless Abbey can first find his perfect match in a month.

As Abbey coaches Lucian through his dates, she can’t deny the chemistry between them. But humans are toys for vampires, and risking her heart isn’t a part of the plan.

This was the perfect antidote, or make that the perfect reading change of pace, after a series of very big books with earth shattering themes.

Not that I didn’t enjoy those, but it’s a different kind of enjoy.

Love at Stake was frothy, refreshing and just plain fun. And I really needed a fun book, so it was fantastic.

Also fangtastic, since the hero is a vampire.

Love at Stake is a contemporary/paranormal romance about two people who move in totally different worlds, discovering that they are just right for each other, even though “conventional” wisdom would say they have nothing in common.

So it’s a kind of opposites attract romance. Not just opposite because Lucien Redgrave is a vampire, but also that he is a major player in vampire politics and big business. Without the fangs, Lucien could easily be the hero of a “billionaire” love story.

Abbey is a human who got into the supernatural world by accident. Her mother got bit by a were-badger. (Badger!?!) And its not just that Abbey is human, but that she works for a living in a supernatural matchmaking business.

Of course, the matchmaking business brings them together, but not as a match. Lucien’s daughter wants to use Fated Match to find herself a true mate. Lucien is certain that no computer program can find anyone their mate. He won’t let his daughter sign up until he vets the service first.

Lucien challenges (or let’s call it a bit) that Fated Match can’t find his mate within 30 days. If the company wins, his daughter can sign up. If the company loses…there will be a lot of disappointment all around.

Except that Lucien can’t make himself concentrate on any of the women that might be his match. He’s become fascinated with Abbey. Even though vampire-human matches are not supposed to be possible.

From the beginning, Abbey’s job is at stake. She has to find Lucien’s mate or she’ll lose her job. But long before the time is up, Abbey realizes that what is really on the line is her heart.

Because Lucien claims that he doesn’t have one.

Escape Rating A-: Love at Stake is a paranormal romance where the paranormal elements take a back seat to the romance. But it’s a very plush, leather upholstered back seat in the back of an expensive limo.

The story is about two people who shouldn’t find each other, but do. And because they both know that a relationship between them is not supposed to work, they resist their attraction as long as possible, and with enough suppressed steam to heat my iPad’s circuits.

Abbey is certain that Lucien is out of her league, not just species-wise, but also socially, economically, and she’s certain he’s way too gorgeous for her average self.

Lucien sees a woman who brings life to everything she touches. Her humanity makes every experience fresh and new, something he hasn’t felt for over 900 years. She makes him feel alive.

But they both believe it can’t work. So they pretend it isn’t. The number of times they hurt each other, and themselves, is a little heartbreaking. And it completely sucked me in.

Discovering that Love at Stake is the first book in the Fated Match series is excellent news! I want more!

And if Love at Stake turns out to be your cup of tea, (or glass of red wine), take a look at Jessica Sims’ Beauty Dates the Beast for more supernatural matchmaking fun. 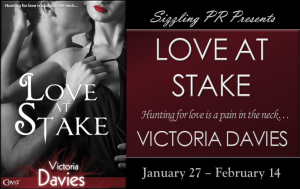 Victoria is giving away a $25 Amazon Gift Card. Woohoo! To enter the giveaway, just fill out the Rafflecopter below.
a Rafflecopter giveaway

3 thoughts on “Review: Love At Stake by Victoria Davies + Giveaway”